The compan­y will also begin workin­g around the clock on the Model 3 sedan
By Reuters
Published: April 19, 2018
Tweet Email 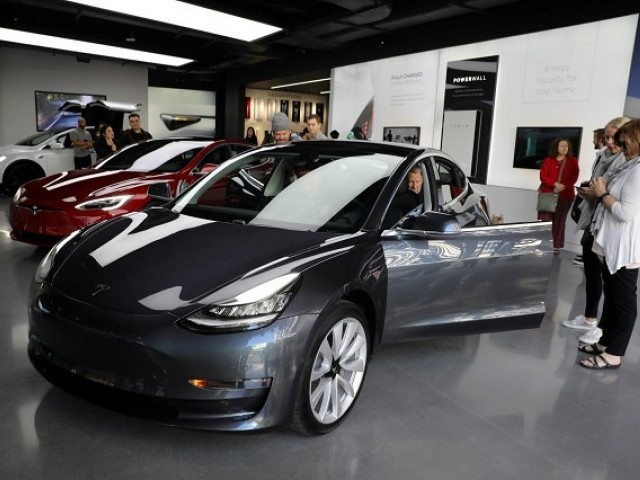 A Tesla Model 3 is seen in a showroom in Los Angeles, California US January 12, 2018. PHOTO: REUTERS

SAN FRANCISCO: Tesla is aiming to ramp up production to 6,000 Model 3 cars per week by the end of June to reach its weekly goal of 5,000 and allow for a margin of error, automotive news website Electrek reported on Tuesday, citing a letter to employees from Chief Executive Elon Musk.

Underscoring Tesla’s need to roll out cars quickly to customers and collect needed revenue, the company will also begin working around the clock on the Model 3 sedan, adding another shift within the general assembly, and both the body and paint shops, Electrek quoted Musk as saying.

Tesla did not immediately respond to a Reuters request for comment.

The news comes a day after Tesla temporarily suspended its Model 3 assembly line in what the company said was a planned pause, its second since February, to improve automation and address bottlenecks that have delayed production.

“We will be stopping for three to five days to do a comprehensive set of upgrades. This should set us up for Model 3 production of 3,000 to 4,000 per week next month,” Electrek quoted Musk as saying.

“Another set of upgrades starting in late May should be enough to unlock production capacity of 6,000 Model 3 vehicles per week by the end of June,” he added.

Investors are closely watching to see if Tesla is able to meet long-delayed targets and quickly ramp up the Model 3, on which the company’s future profitability rests. Tesla is pressured on a host of fronts after a fatality in one of its vehicles using its Autopilot system, a downgrade by Moody’s, and a public spat between Musk and safety regulators.

Tesla’s use of robots to assemble Model 3s has led to more complexity and delays, which Musk acknowledged last week in a tweet: “Excessive automation at Tesla was a mistake. To be precise, my mistake. Humans are underrated.”

“Tesla’s been trying to run full tilt,” said Chaim Siegel, an analyst at Elazar Advisors, before Musk’s letter was published. “He’s sleeping overnight on the production floor. I don’t think there is any way they’d purposely want to slow production. It tells me something’s not quite right.”

In the letter to employees cited by Electrek, Musk said Tesla had built over 2000 Model 3s per week for three weeks, with 2250 made last week.

Missed deadlines threaten the money-losing company’s credibility with the market and its ability to raise cash. Musk has said no new funds are needed this year, although many analysts dispute that.

Musk rallied employees in the letter, while warning departments or suppliers who missed the mark, saying they would need a “very good explanation” and a plan for fixing the problem presented directly to him.

Shares of Tesla, which ended 1.2 per cent lower on Tuesday, rose 1.4 per cent in after-hours trading.