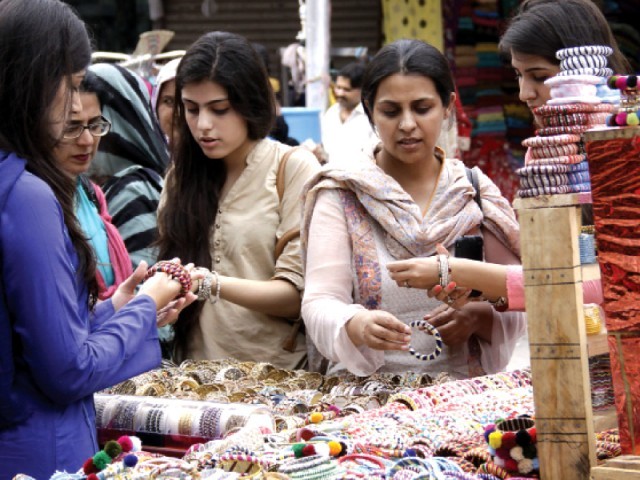 FAISALABAD: As Eidul Fitr is just round-the-corner, shopping has gained momentum and people of all age groups, particularly women and children, are thronging bazaars and malls in Faisalabad. These preparations will typically reach their crescendo on ‘Chand Raat.’

Throughout the city, stalls have sprung up, selling cosmetics, earrings, clothes, bangles and mehndi.

Most of these bazaars have been decorated with festive lights. There are a large number of such stalls particularly in markets, including D-ground Harianwala Chowk, Bohawana Bazaar, Anarkali Bazaar, Katchery Bazaar, Main Bazaar Jhal Khanoana, Jalvi Market on Jaranwala Road, Madina Bazaar in Ghulam Muhammad Abad and Madina Town etc.

On the other hand, owners of shoe stores, children garments shops, boutiques and other readymade garments have increased prices and are overcharging the consumers.

Saeed Akhtar, the owner of a garments shop in Kutchery Bazaar, said, “Eidul Fitr is a festival when everyone purchases new clothes, shoes and other items; not only for their families, but also themselves.”

He added that shopkeepers get a chance to maximize their profits once a year. Meanwhile, the district police have made elaborate security arrangements in and outside the markets, shopping centres and deployed armed policemen to ensure safe and hassle-free shopping.