A cultur­al must, women and girls get henna design­s on hands for Eid
By APP
Published: June 9, 2018
Tweet Email 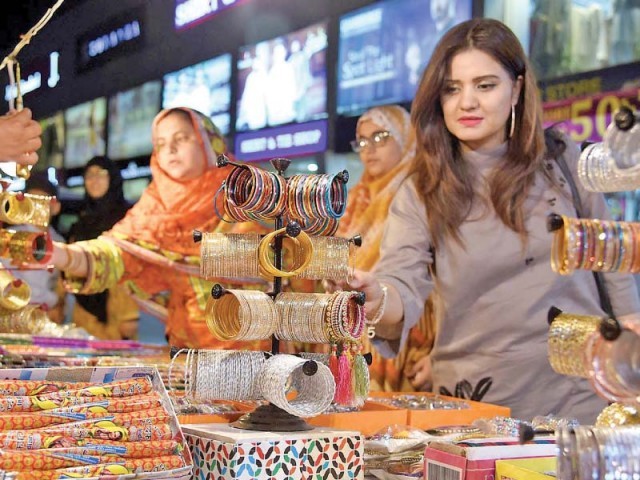 ISLAMABAD: As the countdown begins for Eidul Fitr, the demand for trendy henna cones rises.

From street hawkers to cosmetic shops every retailer has piled up cone mehndi for the Eid.

“What is Eid without mehndi and bangles,” said woman buying accessories from a street vendor.

“Mehndi is considered to be an art. Mehndi adds attractiveness to a girl’s hands in our culture,” said beautician Saadia Hameed.

Women of every age love to apply beautiful designs of mehndi on their hands and feet especially on the eve of Eidul Fitr, she said.

Cone mehndi wrapped with different shiny glittering papers is the most essential ingredient of Eidul Fitr celebrations in the country.

In the modern age usually people buy henna cones, which are ready to use and make its application easier. However, in rural areas women grind fresh henna leaves on grinding stones with added oil, which though not as refined as professionally prepared henna cones, achieves much darker colors.

The trend of women henna experts is increasing during Eid celebrations as they setup their stalls days before Eid till chand raat to attract females, said a young girl Asma Pasha.

“A lot of women like to get henna done during Eid as it makes them feel fresh, new and beautiful. Many families even have a henna night celebration, where all the women of the family and friends gather together at one place. We also offer home service henna for such occasions,” says a henna expert Sofia Azam .

“We usually celebrate Eidul Fitr with lavish feasts and buy new clothes to celebrate and enjoy the joyous occasion. Henna is a big part of this,”  she added. 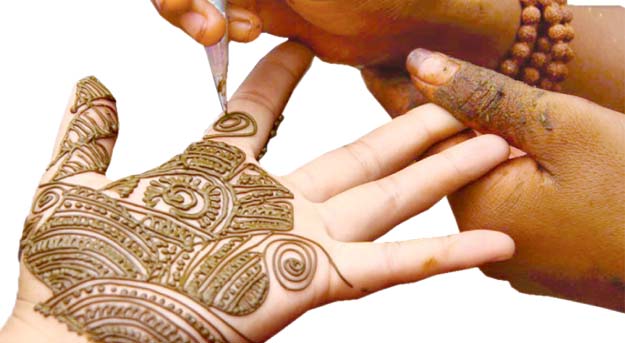 Henna designs vary according to the region and cultural background but the most popular designs are Arabian mehndi designs among young girls, said mehndi artist Sidra Ali in Beauty Salon.

As Ramazan draws to an end and Eid’s festivities gear up, the capital’s markets are brimming with traditional mehndi and bangles stalls to attract women, both young and old. Applying various styles of mehndi is an annual chaand raat activity for women, especially young girls.

To cater to this market, mehndi stalls are set up at markets and beauty salons to provide a variety of creative motifs for women seeking to indulge in the activity.

“The application of mehndi at stalls is part of our heritage with regards to Eidul fitr and is also a source of happiness,” said Samina, a housewife. Talking to APP, Saleem, a stall holder in G-9 markaz, said he setup his stall before Eid and has earned sufficient profit till now and is looking forward to making considerably more on the nights before Eid.

Various book shops also start selling mehndi design books before Eid as they are in great demand among girls who want to master the art of henna (mehndi) application.

With the never-ending popularity of such trends, some hazardous chemicals are being used to add darker color to the mehndi, which though makes it more prominent but has dangerous effects on one’s skin and create allergies, Saima informed.

Moreover, Eid shopping has gained momentum as every evening, post-Iftar, markets are flooded by families.