The mob surrou­nded the Muslim man and tried to attack, accusi­ng him of 'love jihad'
By News Desk
Published: May 30, 2018
Tweet Email 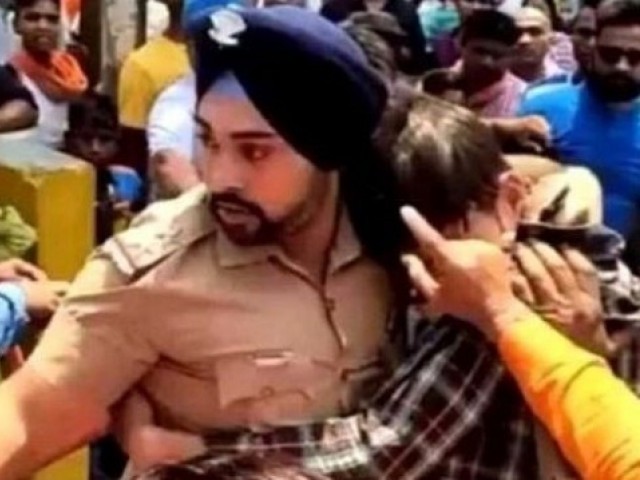 A policeman touted as a hero for saving a Muslim man from being lynched by a mob has now been at the receiving end of death threats in India on Wednesday, BBC reported.

Gagandeep Singh, an officer in Uttarakhand, shot to fame after a video of him saving a Muslim man from a Hindu mob went viral last week. The man was visiting a temple with his Hindu lover.

The mob surrounded the man and tried to attack, accusing him of “love jihad”.

The term has been popularised by radical Hindu fringe groups who accuse Muslim men of participating in a conspiracy to turn Hindu women from their religion by seducing them.

When the video was first shared online, Singh was deemed a “role model” for all Indians, and his story was carried in many mainstream Indian publications.

“I was just doing my job. Even if I was not in uniform, I would have done the same thing and every Indian should do the same,” he was quoted as saying by local media.

Notwithstanding it did not take long for people to castigate Singh’s actions, accusing him of defending “indecent behaviour”.

Police officials working with him have said that he has received threats to his life, and now has been sent on leave.

Certain politicians have also publicly justified the actions of the mob.

“It’s wrong when these people (Muslim men) bring Hindu girls to our places of worship despite knowing it’s a temple and it’s pious,” Rakesh Nainwal, an MLA of the ruling Bharatiya Janata Party (BJP) said

Another BJP MLA Rajkumar Thukral said that this was an attempt by the man to hurt the feelings of the Hindu community.

“We don’t go to mosques because we don’t have the right to go there,” he added.

“Then why did these men go to our temple with an intention to destroy the Hindu culture?”

But for some residents of Ramnagar, where the incident took place, the turn of events has been disturbing.

“When a boy and a girl go somewhere together by choice, then how can these right-wing groups call it a case of “love jihad” and attack them?” Ajit Sahni, a resident of Ramnagar, told BBC Punjabi.

The article originally appeared on BBC