At least 80,000 people from dozens of villag­es along Workin­g Bounda­ry have fled their homes since Friday­
By AFP / News Desk
Published: May 23, 2018
Tweet Email 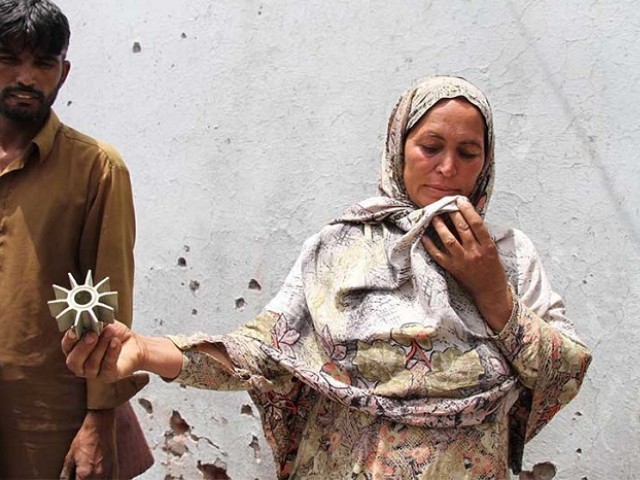 At least 80,000 people from dozens of villages along Working Boundary have fled their homes since Friday. PHOTO: FILE

SRINAGAR: A mortar and gunfire battle between Pakistani and Indian forces along the Kashmir frontier killed five civilians Wednesday, taking the death toll in the six-day confrontation to 16.

The clashes erupted after the Indian forces martyred four members of the same family along the Working Boundary near Sialkot on Friday.

At least 80,000 people from dozens of villages along the 200- kilometre (125-mile) long border between the Jammu region in Indian-held Kashmir and Pakistan’s Punjab province have fled their homes since Friday.

The Indian and Pakistan militaries held talks this week but failed to calm one of the deadliest flare-ups this year.

An Indian police officer, speaking on condition of anonymity, described the flare-up as a “war-like situation” in the affected districts of Samba, R.S Pura, Akhnoor and Arnia.

Valley of death: Living in the Indian army’s crosshairs

On Friday, Pakistan summoned the Indian high commissioner to lodge a strong protest over the latest ceasefire violations by Indian forces near Sialkot.

The Indian forces, the Inter-Services Public Relations (ISPR) said, targeted the civilian population. The firing prompted strong response from the Punjab Rangers, that targeted the posts where the fire was coming from.

Within hours of the latest border clashes, the Indian high commissioner was called to the Foreign Office by the acting foreign secretary.

Usually, Pakistan summons the deputy high commissioner. However, this time the Indian envoy was called in because of the severity of the ceasefire violation.