Pakora stalls mushro­om overni­ght with the sighti­ng of the moon
By APP
Published: May 20, 2018
Tweet Email 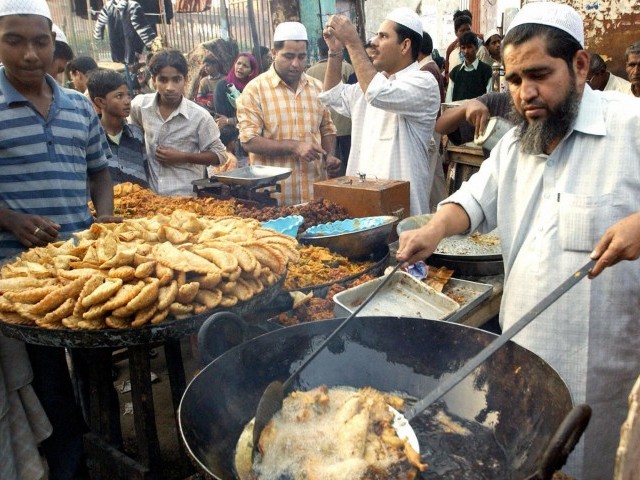 A large number of stalls and shops could be witnessed in different localities of the country selling traditional fried pakoras in Ramazan.

“Pakoras are the best snack after remaining hungry for long,” said a citizens Imran Mohammad. “It’s a complete food, with spices, oil, onions and even potatoes. A few pakoras are enough for me,” he added.

“It’s a profitable business and you don’t need to invest much,” said a vendor. In Ramazan selling pakoras is more profitable, though the business hours are limited.

Pakoras a mouth-watering snack ideal in rainy season and is the main snack in iftar, It is a deep fried spicy snack which is popular among all social classes, a citizen Zeba Noman said.

A shopkeeper said that his shop offers a variety of pakoras like plain, spinach leaf, onion rings, potato and green chilli and no snack beats our ‘pakoras’.

“Mostly we ate pakoras in Ramazan but even then it is only snack that you like when it rains,” said another customer.

Food connoisseur Yousuf Bawany writes that pakora is Pakistani staple dish which is a must-have because any Iftar is incomplete without a variation of this. The popularity of pakoras lies not only in their unique flavour profile, but also in their affordability.

Pakoras are savoury snacks deep-fried to a crisp and served with a dash of chaat masala with ketchup, tamarind chutney or chilli sauce.

The English have fritters, the Chinese have dumplings, and the Japanese have tempuras, but nothing beats the satisfaction of a crunchy pakora at the time of Iftar. This notoriously popular snack is light on the taste and heavy on the waist, so no matter how tempting it may look, do not give into the temptation of finishing up the entire platter in one go.

Also featured in the pakora is a mixture of edibles including potatoes, tomatoes, spinach, onions, cottage cheese, unripe mangoes, eggplant, and green chillies.