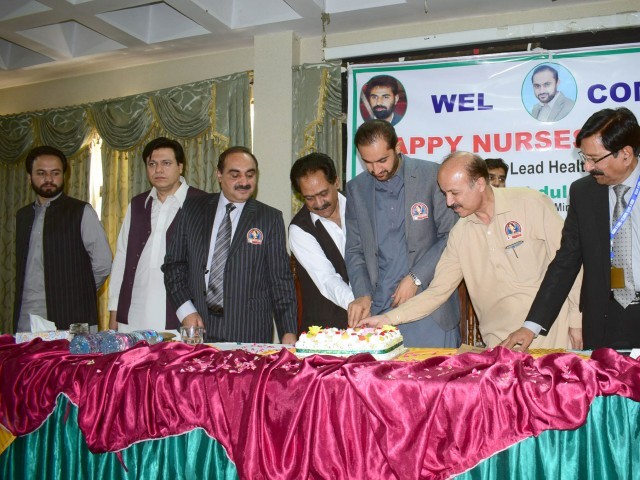 QUETTA: Balochistan Chief Minister Abdul Quddus Bizenjo has announced that the nurses working in government hospitals in the province will receive risk allowance.

“Nurses along with doctors have been providing healthcare services to the poor despite all odds and challenges,” said the Balochistan chief minister while addressing a Nursing Day Ceremony held in Quetta on Thursday.

The chief minister cut a cake on the occasion and distributed certificates among the nurses.

CM Bizenjo also directed the authorities concerned to prepare PC-I for the construction of a new nursing school in Quetta.

Bizenjo assured the nurses that their basic demands would be fulfilled at the earliest.

“Nursing is a sacred profession where all patients are treated without bigotry as the provincial government has been utilising all available resources to facilitate the nursing department,” he added.

“The provincial government will always support the nursing department as efforts are underway to address the nurses’ needs,” he added.

“We will provide extension to all nurses appointed on ad-hoc basis,” he said, pledging more increase in nursing allowance.

Addressing at the occasion, Bizenjo said, “The provincial government intends to revamp and develop the education sector in the province and for the purpose a lavish amount has been allocated for it in the budget.”

He said, “In order to emerge as a civilised and modern society, it is mandatory for girls to be educated.

He urged all parents to educate their children, saying “only an educated mother can develop an educated society”.

Criticising the previous regimes, the chief minister said, “Apart from making tall claims, our predecessors didn’t do much for the education sector.”

He said that a lot of things needed to be done in the least amount of time left. “Of the total PSDP in the provincial budget for fiscal year 2018-19, 28 per cent has been allocated for the education sector.”

Talking to the students, Bizenjo said, “Keeping my promise, I am distributing laptops among students. It’s up to you now to enhance your knowledge and work for the prosperity of Balochistan.”

He urged all students to vote in the next general elections and elect a representative who could keenly work for development and prosperity of the province.