Elections will be held on time, assures CJP

Elections will be held on time, assures CJP 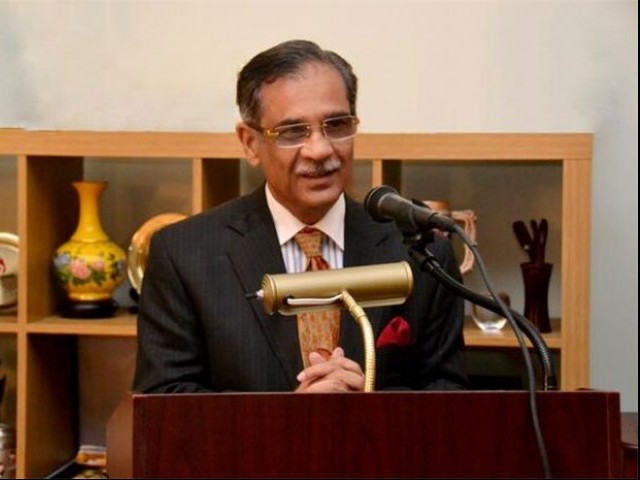 ISLAMABAD: Chief Justice of Pakistan (CJP) Mian Saqib Nisar has said that general elections will be held as scheduled – in June 2018.

The CJP said this on Monday while heading a three-judge bench hearing a suo motu case pertaining to recent directives passed by the Election Commission of Pakistan (ECP).

The ECP had, on April 11, barred recruitment to public institutions and halted development plans approved on April 1, 2018 or later and transfer of funds for ongoing projects ahead of the elections.

The CJP asked ECP Secretary Babar Yaqoob whether it had any specific powers to impose a ban on development schemes and recruitment. “There is this issue regarding appointment of heads of some institutions. Will such notification affect their appointments?” he asked.

The secretary replied that the April 11 notification was issued in the light of a Supreme Court 2013 verdict in the Workers Party case. In the said judgment, he added, the SC had directed the ECP to conduct polls and make arrangements necessary to ensure that polls are conducted honestly, justly, fairly and in accordance with law and that corrupt practices are guarded-against in terms of Article 218(3) of the Constitution.

“Would it not affect the working of a government?” Justice Nisar asked of the ECP notification. The secretary, however, said a similar notification had also been issued in 2013.

Observing that the matter is pending before high courts, the CJP said the apex court did not want to hold on to an issue that could delay elections. “Elections will be held on prescribed period under the Constitution,” he said, adding that he had also been told by authorities that elections would be held on time.

The top judge hinted at referring these cases from all high courts to the Islamabad High Court for their early disposal, adding that it was also a fact that funds should not be doled out in specific areas. “We have to hurry up on this matter,” he said.

The bench later issued notices to the attorney general for Pakistan and all advocates general to assist on the issue. The hearing was then adjourned till today (Tuesday).

In a bid to make the upcoming general elections transparent, the ECP has barred public institutions from recruitment and issued a notification that development plans which were approved on April 1, 2018 will be halted and funds meant for the ongoing development works will not be transferred.