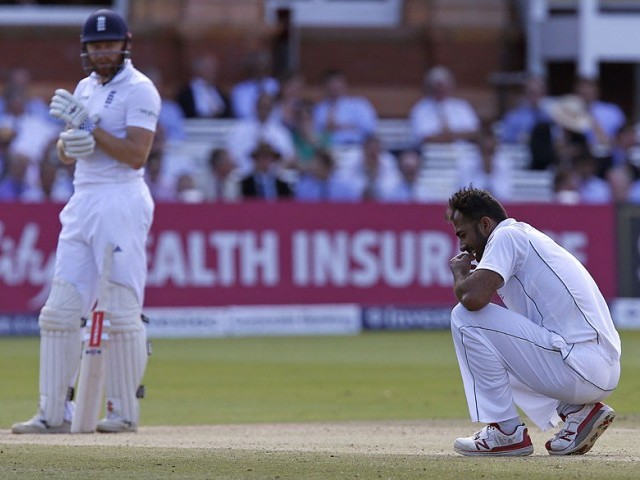 BATTLE READY: The right-handed opener Azhar Ali says England will have home advantage in the two-match Test series but Pakistan are ready for the challenge. PHOTO: AFP

Pakistan opener Azhar Ali believes English condition will favour fast-bowlers and his compatriot pacers have the ability to trouble the hosts.

The right-handed opener was talking to media when he said that England will have home advantage but Pakistan are ready for the challenge.

“Home side always has an advantage when it comes to playing in certain conditions,” said Azhar. “England will come hard at us because they are coming back from losses against New Zealand away from home. They will try to win their home series.”

He added: “The conditions there will favour fast-bowlers. We have a good bunch. They will trouble the England batsmen.”

‘We should back youngsters’

The 33-year-old, when asked how the Test team will fare in the absence of veterans Misbahul Haq and Younus Khan in England, said youngsters need backing to deliver results.

He continued by laying down a plan to upstage England on their home turf. “We should back our youngsters who are going on the tour. When you have a new team and you are going on a tough tour, obviously it poses a big challenge, but if we play as a unit, back each other, then we can extract good performances.”

When asked if the longest-format team is going to face the same fate as it did against Sri Lanka in the UAE, succumbing to a 2-0 defeat in the two-match series, Azhar said there were a lot of positive in the series too.

“There were good signs in the series too,” he said. “Haris Sohail made his debut and scored runs. Asad Shafiq scored a century at the end. All these were positive signs.”

Meanwhile, he did push the batsmen to do more. “But yes there were batting collapses too. Players didn’t convert their starts into big scores. I think batsmen need to work on that.”

Azhar, like all cricketers, wants his name on the Lord’s honours board and he wants to do that with a ton, but without pressuring himself with the task.

“The first Test is at Lord’s. Everyone wishes to have their name on the Lord’s honours board. This will be an opportunity for me to score a century there. However, I am not taking this task as an added pressure. My main task would be to lead the batting and score runs so that my team has an advantage.”

Pakistan’s one of the most potent bowling weapons in Tests, leg-spinner Yasir Shah, will not be a part of the squad travelling to England and Azhar believes replacing him would be a tough task.

“Yasir’s absence is a big loss,” said Azhar. “He has been performing for us for the past three-four years. He played a key role in our victories when we visited England last time around. Captain and coach would be looking to replace Yasir with someone new, but we don’t have anyone right now who has been playing regularly in Tests for Pakistan.”