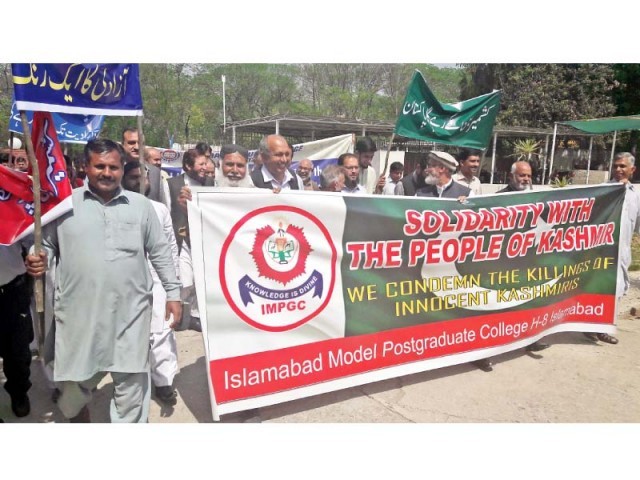 The teaching and nonteaching staff, both men and women, of Federal Government Colleges observed April 6 as Kashmir Solidarity Day. They took out rallies and raised slogans for the freedom of Kashmiri people.

In form of small rallies, the teachers gathered at Islamabad Model Postgraduate College of Commerce H-8 where a big symposium was held. After the speeches, the teachers marched in sector H-8/4.

Later a delegation of teachers reached the United Nations camp office and presented a written protest memorandum to the UN officials. A similar gathering was held in Islamabad Model Postgraduate College for Girls F-7/2.

It was attended by a large number of lady teachers who had gathered from different educational institutions from the capital.

The employees of Federal Directorate also held a rally at Rohtas Road in front of FDE.

In the evening, Director Colleges Amber Sultana along with principals of FG Colleges lit candles in the memory of martyrs of occupied Kashmir as demonstration of solidarity with the bereaved families.