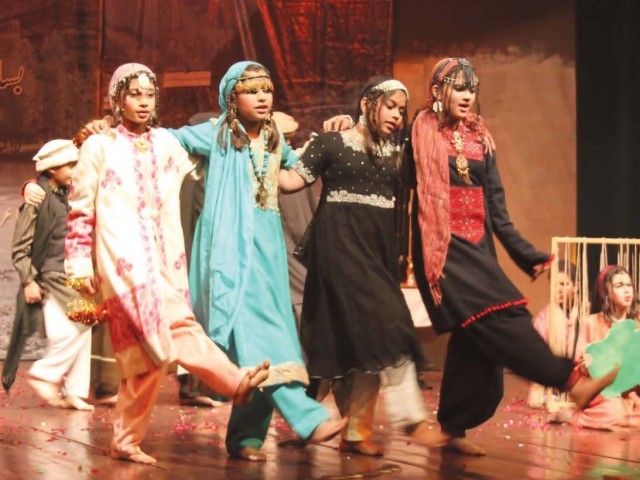 Children enthral the audience with their synchronised dance and colourful regalia. PHOTO: THE EXPRESS TRIBUNE

ISLAMABAD: To mark the Kashmir Solidarity Day on February 5, a five-day cultural show concluded here on Saturday, with enthusiastic attendance and participation by a large number of families and students. The event was organised by the Pakistan National Council of Arts (PNCA) in collaboration with Azad Jammu and Kashmir Council.

Renowned Kashmiri artist Rukhsana Ahmed sang songs in which she paid tribute to those who had sacrificed their lives for the freedom of the Kashmiri people. Students from Roots School System, whose numerical strength was high in the event, enchanted the audience with their illustration of the Kashmiri lifestyle through dances performed in colourful regalia.

Moreover, students of Ali Trust College presented an audacious skit in which they questioned the United Nations (UN) about its 60-year silence in resolving the Kashmir dispute.

Speaking on the occasion, the chief guest applauded the students for proving with their active participation that they stood with the people of Kashmir. He said that the Pakistani government was with Kashmir for their right of self-determination. Later, he distributed trophies and certificates to the performing students.

The PNCA has been organising Kashmir Solidarity Day events for the past three years.