Govern­or, chief minist­er, mayor and others visit Mazar-e-Quaid to mark the day
By Our Correspondent / PPI
Published: March 24, 2018
Tweet Email 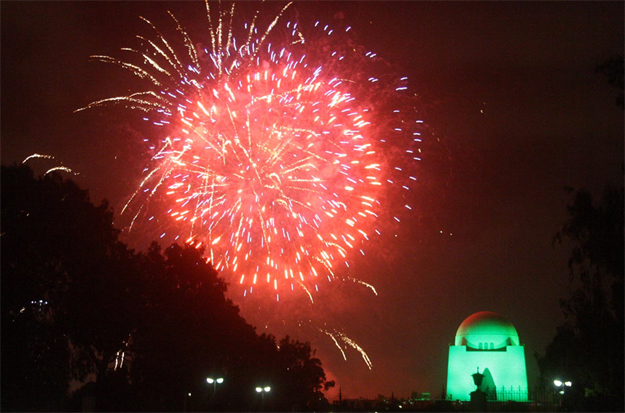 A view of fireworks at Mazar-e-Quaid on Pakistan Day. PHOTO: ONLINE

KARACHI: Pakistan Day was celebrated on Friday across Sindh with traditional enthusiasm and commitment to work hard for the progress and prosperity of the country. The day is observed to commemorate the resolution passed in 1940 in Lahore for an independent Muslim state in undivided India.

Throughout the day, politicians, government functionaries, lawmakers, bureaucrats, diplomats, students and the general public visited the mausoleum of Quaid-i-Azam Muhammad Ali Jinnah. People hoisted the national flag at their houses and played the national anthem in Karachi and other cities in the province. Various seminars and walks were also organised in Karachi, Hyderabad, Sukkur, Mirpurkhas, Larkana and Shaheed Benaziarbad to mark the day.

Governor Mohammad Zubair, Chief Minister Murad Ali Shah and provincial ministers, including Manzoor Wassan, Sohail Anwar Siyal and Mumtaz Jakhrani, visited Mazar-e-Quaid early in the morning and laid a floral wreath at the grave of the nation’s founder. The CM also recorded his views for the historic struggle of the father of nation in the visitors’ book.

The governor said Pakistan Day is an important day in our history. He added that all citizens of the country should follow the principles and guidelines set down by the founder of the nation. He lauded the services of Quaid-i-Azam and other All India Muslim League leaders for the creation of Pakistan. 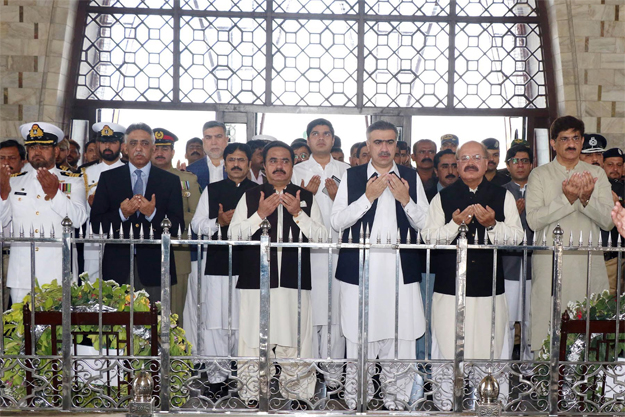 The spirit and unity which was demonstrated on March 23, 1940 was unprecedented and now the time has come again to demonstrate the same kind of spirit and unity to steer the country out of different challenges, the CM said while speaking to the media at Mazar-e-Quaid.

He added that March 23, 1940 was a historic day on which the Pakistan Resolution was passed. The resolution set a direction for the creation of Pakistan and ultimately the goal was achieved with an organised struggle led by Quaid-i-Azam.

Since Independence, the country has witnessed various ups downs and at present the biggest challenge is posed by terrorism, the CM said. “The nation stood against terrorists bravely and demonstrated unprecedented spirit of unity and finally defeated them,” he remarked, adding that “the [current] unity is a revival of the spirit that was demonstrated on March 23, 1940”.

The CM asserted that 2018 was the year of the general elections and a safe future of Pakistan could only be guaranteed through the continuation of democracy. He urged the people of Pakistan, particularly of Sindh, to participate in the election process and elect those representatives who had served them and upheld their rights. “We have to strengthen democracy and democratic institutions as this is what Pakistan Day demands,” he said.

Responding to a question, the CM said the revival of the Muttahida Majlis-e-Amal was a good omen. “At the time of the general elections, like-minded political parties form such alliances, which is their democratic right,” he remarked. 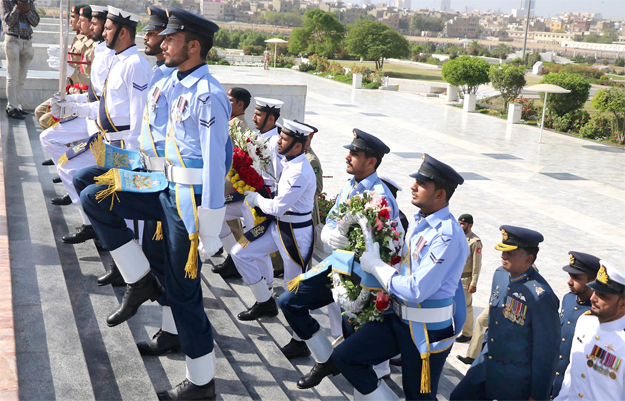 A ceremony on also was held at the Pakistan Rangers Sindh Headquarters to mark Pakistan Day. Sindh Rangers Director-General Major General Muhammad Saeed laid a floral wreath on the Yadgar-e-Shuhada (monument of the matyrs) to pay tribute to the martyrs who laid down their lives for the defence of their motherland. A large number of paramilitary force officers were present at the ceremony.

The Pakistan Coast Guards organised a boat race near Keamari to celebrate the day. Pakistan Coast Guards Director-General Sajjad Sikander Ranjha said March 23 should be celebrated as it signified independence. Pakistan’s foundation was laid on March 23, he said, adding that we should promise on the day that we will protect our country.

A programme, ‘Naujawano ka Pakistan’, was organised at the Arts Auditorium of the University of Karachi (KU) to celebrate Pakistan Day. Speaking at the event, KU Vice-Chancellor (VC) Prof Dr Muhammad Ajmal Khan said Jinnah and other leaders of Pakistan Movement united the Muslims of the Subcontinent to secure a separate homeland.

We must value our independence and the sacrifices made by our ancestors at the time of Independence, Dr Khan said. He called for promoting education, as this could strengthen the country. Pakistan was blessed with natural resources and it only needed a strong system, the KU VC said, adding that if the county’s youth become serious to resolve their national issues including poverty, all such issues would be resolved.

KU Faculty of Social Sciences Dean Prof Dr Muhammad Ahmed Qadri said we must serve our country and free our society from corruption and nepotism. Change could only be brought through education and the country was progressing as students and teachers were conscious of their responsibilities, he added.

We have not yet realised the value of freedom, said Saleem Mughal, former professor of Federal Urdu University of Arts, Science and Technology. We should look at nations like Kashmir and Palestine who are making sacrifices but are deprived of independence, he maintained.

Former general secretary of Aligarh Old Boys Association Mukhtar Ahmed Naqvi also spoke at the event. We must work for the progress of Pakistan in the light of the objectives which led to its creation, he said.

A poster exhibition featuring important historical events from 1947 till date was also displayed at the event.

The alKhidmat Foundation organised an event to celebrate Pakistan Day with orphans and organised several events, in which hundreds of children participated, performed tableaus and took part in speech competitions.

Jamaat-e-Islami South Amir Syed Abdur Rasheed and Bin Qasim Amir Abdul Jameel attended events to mark the day in their localities. Independence is one of the greatest blessings of God, Rasheed said. He urged children to work hard for the progress of Pakistan.

The DMC also celebrated the day at its head office where heads of departments and staff attended a programme. Speaking at the event, Raza said March 23 symbolised the success of the ideology of Pakistan. He called for united efforts to make Pakistan a great country. The Pakistan Resolution was a milestone in the political struggle of Muslim leaders of the Subcontinent who eventually founded a separate country.