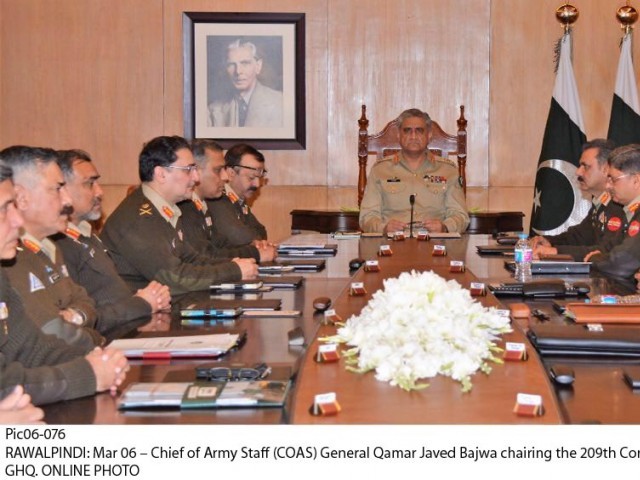 ISLAMABAD: NSATop military commanders on Tuesday pledged to carry forward the gains in the anti-terror fight in order to achieve enduring peace and stability in the country.

“[The] forum pledged to carry forward the achieved successes to enduring peace and stability in the country,” said a statement issued by the Inter-Services Public Relations (ISPR).

The plan announced by Ghani during an international conference envisaged unconditional talks with the Afghan Taliban. The Afghan president also offered insurgents to open a political office for peace talks.

He made the statement while interacting with a group of visiting American journalists.

The NSA highlighted, in detail, different intriguing dimensions of the Afghan conflict and said that no love stories are born out of use of force.

“Military strategy always on the lead has injured the Afghan society which has made the war so perpetual with no end in sight,” Janjua said.

“We all need to invest in peace instead of war.”

“We want to work with US and Afghanistan in a cooperative framework. Let’s, collectively invest in peace and bring the closure to this perpetual conflict instead of wining it,” he added.

In response to a question, he appreciated President Ghani’s offer to the Taliban as a positive step forward towards the political reconciliation in Afghanistan.

“This is what we were insisting for since so long.”

The NSA, subsequently, gave them a detailed presentation on the regional security situation with particular reference to Pakistan focussing on how Pakistan, its people, armed forces, law-enforcement agencies and intelligence agencies performed brilliantly and resiliently after 1979 and 9/11.

He reiterated that Pakistan was a morally correct country and had always stood on the right side of history and along with the world to contribute for peace, stability and prosperity.

The delegates sought the adviser’s opinion on different regional and international security issues.

Janjua said Pakistan is committed to have friendly and cooperative relations with all the regional countries.

He also sensitised the delegates over the regional security environment and stressed that the US and the west should play a positive role in maintaining security of the region which, over a period, has become quite fragile.