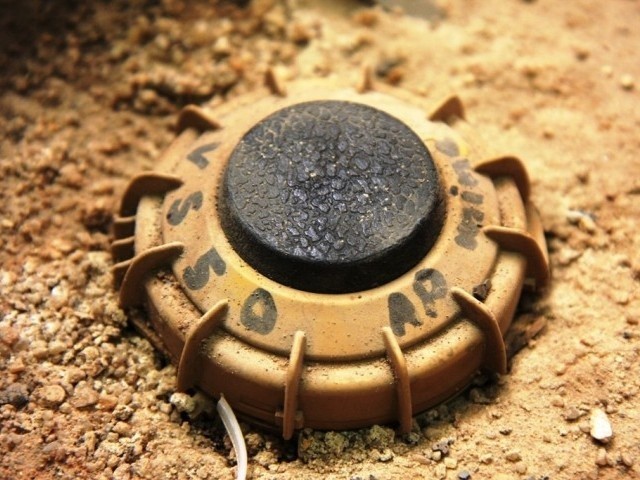 A file photo of a land mine. PHOTO: FILE

PHNOM PENH: Afghanistan’s deadliest province for landmines has been declared free of the explosive devices after a decade-long clearance effort, the demining group HALO Trust said on Thursday.

The organization said it had cleared more than 600 minefields in Afghanistan’s western province of Herat, opening up 40 million square metres, or 15.5 square miles, of farmland.

About 60,000 people, many returning refugees, had been housed in a new city district built on cleared land, HALO said.

HALO spokesman Paul McCann said nearly 80 percent of the country’s minefields had been cleared in the past three decades.

“Unfortunately, there are areas where, for security reasons, it’s not possible for HALO Trust to carry out its operations,” McCann told.

An average of 125 people a year were killed or injured by mines in Herat until clearance began in 2008, according to Britain’s foreign aid department, which funded the effort.

Britain-based HALO said mine removal has boosted Herat’s economic prospects, as people can now access prime agricultural land in a region where three quarters of residents are rural.

“The news on Herat is certainly welcome and a credit to those who dedicated their efforts this past decade to removing these indiscriminate weapons,” said Patricia Gossman, senior Afghanistan researcher with Human Rights Watch (HRW).

“But much more needs to be done across the country as insurgents continue to plant IEDs, and all parties leave behind unexplored ordnance.”

Clearance efforts in Afghanistan are hampered by fighting between the government and its allies and insurgent groups, including the Taliban and Islamic State, according to HALO.

Insurgents commonly use improvised explosive devices (IEDs), which can be buried or hidden and detonated remotely, or carried by suicide bombers.

Non-suicide IEDs accounted for 18 percent of the more than 10,000 civilians killed or injured in 2017, the United Nations Assistance Mission in Afghanistan (UNAMA) said on Thursday.

“Explosive remnants of war” which include landmines accounted for 6 percent of civilian casualties, UNAMA said.

Yet most landmines are a legacy of previous wars, McCann said. They were laid during conflicts in the 1980s and 1990s when Afghan mujahideen battled the Soviet Union  and then fought among themselves once the Soviets pulled out in 1989.

Afghanistan has since signed the 1997 global treaty which bans the use, stockpiling, production or transfer of landmines.