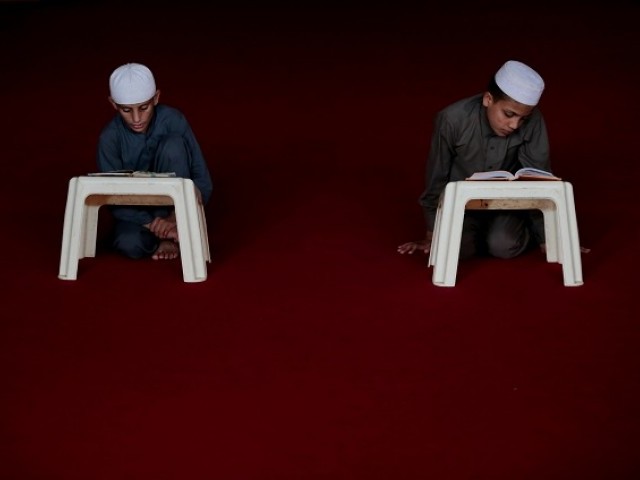 ISLAMABAD: While students at seminaries may study some of the same subjects that children do at regular schools, there is a need to inculcate critical thinking amongst those at madrassas.

This was suggested in a study, “After Study Hours: Exploring the Madrassah Mindset”, by the Pakistan Institute for Peace Studies (PIPS). The study was launched in the federal capital on Wednesday.

While talking about their research, field researchers Sabookh Syed, Mujtaba Rathore, and Muhammad Younus said that they had conducted a survey of 135 students from around 43 different seminaries spread over 17 districts across the country.

Teaching values: Ethics to be promoted in schools

They said that it was often difficult to engage with seminary students because of a mistrust and the absence of a culture of asking questions.

The study noted that as in the past, the government can bring seminaries into the mainstream by introducing subjects such as mathematics and sciences.

However, just teaching students these subjects was not sufficient and they should also be taught the meaning of what they were learning and are engaged with nuanced analysis, the study noted.

It called for developing students’ interest in logic, history and philosophy, which could help in enhancing their critical thinking.

Council of Islamic Ideology (CII) Chairman Dr Qibla Ayaz said that while many of today’s international and national developments were somehow linked to madrassas, little knowledge was available about madrassas.

He suggested that the subject of “madrassa studies” be introduced in universities which would help provide scientific studies on the system and how to improve it.

Experts noted that many madrassa students were tied to sectarian thinking in the way the political parties they were attracted to, the magazines they read, and the personalities they chose to follow.

Participants of the discussion wondered why this was so, even though the curriculum for all seminaries was virtually the same.

Religious scholar Amanat Rasool argued that students usually consult scholars hailing from their own sects, hence there was an inherent disposition to sectarian development from the onset. Moreover, he propounded that the sectarian tilt could come from the requirement that seminaries are supposed to be affiliated with one of the several sect-based boards.

The study, however, noted that much of madrassa students’ mindset is in line with the broader society. The parties they choose are ultimately from the choices provided outside of the seminary.

Harris Khalique, a columnist said, believed that the problem came from the society at large. Hence, he called for viewing the madrassa system in the larger context of education reforms, which are currently divided into 28 different systems.

He went on to add it was unfortunate how seminaries were misused in the war economy and the continued war on terror would only prolong this problem.

PIPS director Amir Rana stated that madrassa graduates are already stepping in the mainstream educational sector but they are not part of the economy in the way students of other sectors are.  Khalid Masud, a former chairman of CII, reasoned that madrassa education is professional education but it is not mass education, which is a relatively modern concept.

Dr Ayaz also added that the recently-released Paigham-e-Pakistan (Message of Pakistan), which denounced militancy in Pakistan, was a major step forward.