PM takes a jibe at opposi­tion partie­s, says there were more speake­rs than the audien­ce at the Mall Road rally
By News Desk
Published: January 20, 2018
Tweet Email 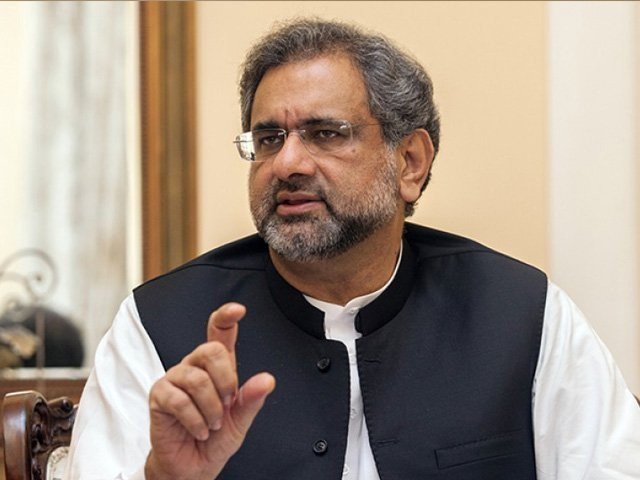 Prime Minister Shahid Khaqan Abbasi has challenged the political rivals of Pakistan Muslim League-Nawaz (PML-N), specially those who had recently cursed the Parliament at an anti-government rally in Lahore, to dissolve the provincial assemblies.

Speaking at a ceremony in Bhakkar on Saturday, he said the ruling party did not believe in the politics of cursing, adding that it was up to the masses to choose between the political parties with the message of love or hate, Express News reported.

Taking a jibe at the opposition parties, the prime minister said that there were more speakers than the audience during the Pakistan Awami Tehreek (PAT) chief Tahirul Qadri-led rally at Lahore’s Mall Road earlier this week.

Abbasi said the Parliament was cursed and he was threatened during the rally that provincial assemblies would be dissolved.

“I have a clear message for those cursing the Parliament and staging a circus at Mall Road that make an attempt to dissolve the assemblies if they have it in them… I challenge them to table a no-confidence motion against me in the National Assembly,” he stated.

The PML-N had always talked about uniting the provinces and against the division and discrimination, said the premier, adding that the people can witness development projects initiated by the party in all provinces of the country.

“We’ve never stepped back from serving the masses… our political opponents, however, couldn’t perform despite having governments [in different provinces],” he added.

The National Assembly on January 18 condemned Pakistan Thereek-e-Insaf (PTI) chief Imran Khan and the Awami Muslim League (AML) chief Sheikh Rashid for cursing the parliament in the multi-party opposition protest on Wednesday as it adopted a resolution against the two leaders.

The AML chief in his fiery speech had announced tendering his resignation as a lawmaker while the PTI chief had said he cursed the current parliament that “has violated very basic principles of democracy by voting in support of the corrupt Sharifs”.