Sarfar­z Shah, 22, was shot dead in a Karach­i park after being suspec­ted as a robber­
By Shaikh Israr
Published: January 7, 2018
Tweet Email 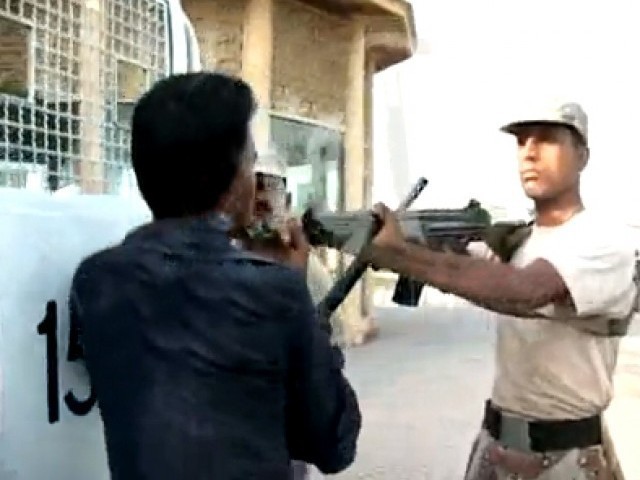 Screenshot from video which captured the murder of Sarfraz Shah in 2011. PHOTO: EXPRESS

KARACHI: President Mamnoon Hussain has granted pardon to Rangers personnel who had been sentenced to life imprisonment over their involvement in the June 2011 killing of a youth inside a public park in Karachi’s upscale Clifton area.

The pardon was granted by the president in exercise of his powers under Article 45 of the Constitution, sources in Sindh’s Home Department told Sindh Express.

“After receiving the pardon orders from the President House, we have communicated with the IG prison, and the convicts may be freed any time from Karachi’s Central Jail,” said a senior official of the Home Department.

Despite several attempt, IG Prison Nusrat Mangan and the superintendent Karachi Central Jail refused to talk on this issue.

The Rangers personnel had killed Sarfarz Shah, 22, considering him a robber out to deprive people in the park of their belongings.

Footage of the killing was filmed by a cameraman from a private TV channel who was at the park to cover an event. The video which was later aired by all news channels sparked widespread public outrage.

The outrage was so extreme that the government took the rare step of removing the provincial chiefs of Rangers and police after the then chief justice of Pakistan Iftikhar Chaudhry took notice of the killing.

On August 12, 2011, an anti-terrorism court in Karachi handed death penalty to a Ranger trooper Shahid Zafar for the ‘extrajudicial’ murder and life imprisonment to five others, including Sub-Inspector Bahaur Rehman, Lance Naik Liaquat Ali and constables Muhammad Tariq, Manthar Ali and Afzal Khan.

The park’s watchman, Afsar Khan, was also jailed for life in the case.

However, the convicts challenged the decision in the Sindh High Court (SHC), which rejected the appeal in January 2014 and retained the death sentence and life imprisonment for everyone, except Lance Naik Liaquat Ali.

Later, the convicts filed appeals in the SHC against their conviction, requesting the court to set aside the ATC judgement.

However, the appellant bench of the SHC rejected the appeals on January 21, 2104 and upheld the ATC ruling of sentencing Shahid Zafar to death after finding him guilty of pulling the trigger.

But in August 2014, the Supreme Court commuted the death penalty awarded to Shahid Zafar when his family appeared before the court and told them that the victim’s family had reached a compromise with them. Later, the court commuted the sentence to life imprisonment.