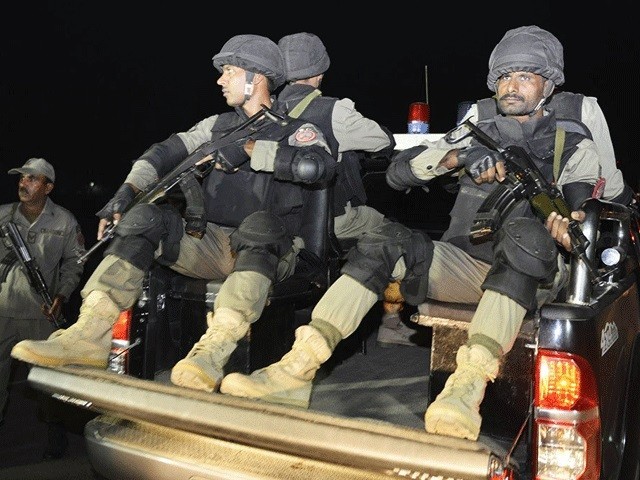 The paramilitary force will be deployed for a week effective from November 26 to December 3 in Islamabad. PHOTO: FILE

ISLAMABAD: After failure of its Saturday crackdown against the protestors who have been staging a sit-in at the intersection of Rawalpindi and Islamabad since November 6, the government has delegated the task of clearing the area to the director general (DG) of Punjab Rangers.

On Saturday, the federal government’s move to clear Islamabad’s Faizabad Interchange through riot police and Frontier Corps (FC) miserably failed as angry protests erupted across Pakistan and life in major parts of the country got paralysed due to hundreds of roadblocks and sit-ins.

After the fiasco in which at least six people died and hundreds sustained injuries, the government called the Pakistan Army to safeguard the government installations in the federal capital.

However, the army on Sunday refused to participate in the crackdown on protesters during a meeting between army chief General Qamar Javed Bajwa and Prime Minister Shahid Khaqan Abbasi.

In this backdrop, the Ministry of Interior on Sunday issued a notification to deploy the Pakistan Rangers (Punjab) in aid of civil forces in Islamabad and Rawalpindi to handle the situation.

Through the notification, Pakistan Rangers (Punjab) DG Major General Naveed Hayat Khan was appointed as the overall in-charge to handle and clear the sit-in at Faizabad and other places with effect from November 26 to December 3, 2017.

Faizabad crackdown: We can’t use force against our own people, says COAS

After the notification, troops of the paramilitary force were deployed at the sit-in site. Earlier, the police and the FC were leading the charge and the Rangers were kept at the backend.

Meanwhile, Interior Minister Ahsan Iqbal appealed to people to distance themselves from elements ‘creating unrest’ as he offered the protestors to once again hold talks with the government.

“The government is ready to hold dialogue with the people of Faizabad sit-in,” he said while talking to the state-owned Pakistan Television (PTV).

After holding talks with the sit-in leaders through its own committee, the government last week notified a six-member clerics committee to hold negotiations with the protestors who have been demanding resignation of Law Minister Zahid Hamid for allegedly changing lawmakers’ oath with regard to avowal of the Finality of Prophethood.

The committee had held multiple sessions with the protestors and also recommended to the government to remove the law minister until probe into the alleged change in oath completed. However, the government apparently declined the suggestion.

Iqbal said Pakistan was fighting a war against terrorism and claimed that some anti-Pakistan elements were using the activities of protesters to defame the country. “I appeal to the nation to distance itself from elements spreading unrest in the country,” he added.

The interior minister on Sunday also made contact with the PPP’s stalwart and Leader of Opposition in the National Assembly Khursheed Shah and asked for his party’s support on the issue on behalf of the government.

According to a statement issued by the opposition leader, Ahsan Iqbal contacted Shah and requested him to adopt the same point of view as the government on the current crisis. The interior minister also took the PPP leader into confidence with regard to the Faizabad operation.

Iqbal told Shah that four of the people who died on Saturday in Islamabad were not killed during the government’s crackdown but actually during an attack on the former interior minister Chaudhry Nisar Ali Khan’s residence.

Iqbal also sought Shah’s advice on the country’s situation. The statement said the opposition leader advised the government to resolve the issue through dialogue. He also requested the protesters to engage with the government and resolve the crisis through talks.

Rejecting Ahsan Iqbal’s claim that four people killed on Saturday while allegedly attacking his house, the former interior minister Nisar said nobody even got injured in the incident.

“Let alone deaths, there was not even any instance of anybody getting injuries,” he said in a statement, adding that Iqbal must avoid making such ‘fictitious statements’ just to hide his ‘inefficiency’.

“Is he not the same person who said I would clear the sit-in within three hours; and now he is trying to put the whole burden [of the operation] on the honourable court.

“It’s a sorrowful event and unfortunate that the interior minister of the country is so uninformed and irresponsible. It was requirement of Ahsan Iqbal portfolio that he should have stood with the administration instead of making lame excuses,” Nisar added.