Saudi offici­als have declin­ed to commen­t on the report­
By AFP
Published: December 17, 2017
Tweet Email 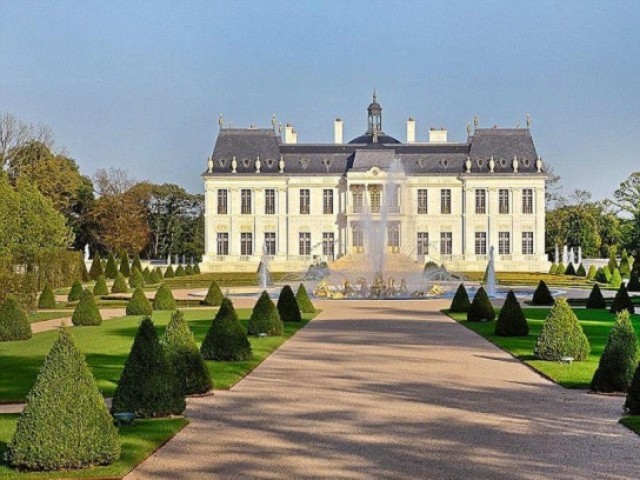 The 57-acre plot includes manicured gardens, huge fountains and a maze, while the interiors are lavishly decorated with gilding and fresco ceilings.PHOTO:SWNS.com

PARIS: Saudi Crown Prince Mohammed bin Salman has been revealed as the owner of a French chateau described as the world’s most expensive home, according to a report in the New York Times.

The purchase of the vast property west of Paris for $300 million (275 million euros) would be the latest in a string of extravagant purchases by the powerful prince, who has been waging a sweeping anti-corruption campaign.

The newly-built chateau was sold to a mystery buyer in 2015, and though its ownership is concealed through shell companies, advisers to the royal family have confirmed the prince is its ultimate owner, the Times reported Saturday.

Saudi officials have declined to comment on the report, which comes after French investigative website Mediapart similarly pointed to the prince as the owner in July.

Fortune magazine reported at the time of the 2015 sale that the Chateau Louis XIV — which has fountains that can be controlled by iPhone — had smashed records to become the world’s priciest home.
On the outside, the mansion looks like a 17th-century chateau in the style of the palace at nearby Versailles, but it is in fact a new-build that went up after its Saudi developer bulldozed the existing 19th-century property.

Its antique facades hide modern facilities including a cinema, deluxe swimming pool and a moat with a transparent underwater chamber so that visitors can enjoy the sight of koi carp swimming past.
The 57-acre plot includes manicured gardens, huge fountains and a maze, while the interiors are lavishly decorated with gilding and fresco ceilings.

The Times report comes after the prince had dozens of members of the Saudi elite including princes, ministers and tycoons locked up in Riyadh’s 5-star Ritz-Carlton hotel as part of an anti-corruption campaign.

Many have since agreed to hand over allegedly ill-gotten gains in exchange for their freedom, Saudi attorney general Sheikh Saud al-Mojeb said earlier this month.

In an interview with the Times in November, Prince Mohammed described as “ludicrous” reports equating the crackdown with a political purge to eliminate rivals before he becomes king.

The Times reported that he bought the chateau through a firm managed through his personal foundation, Eight Investment Company, which also handled his 2015 purchase of a $500 million yacht.

Along with the chateau and yacht, the Times also reported earlier this month that a Leonardo da Vinci painting sold for $450.3 million in November was sold to a Saudi prince acting on behalf of the crown prince.

The yacht purchase, sealed with the help of an army of lawyers and accountants in Germany, Bermuda and the Isle of Man, was revealed through the Paradise Papers document leak.