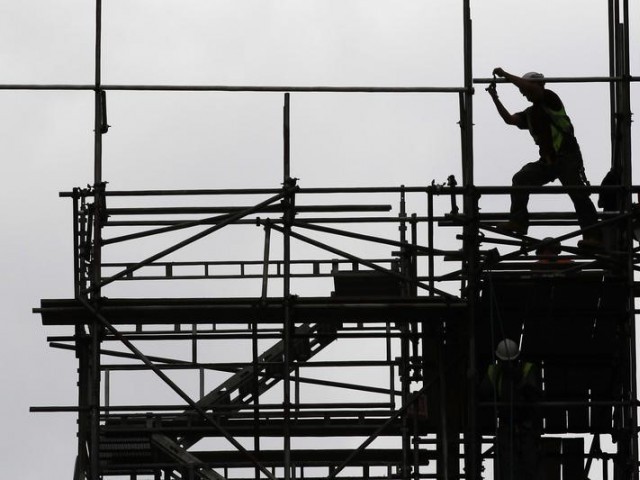 A man works on scaffolds at a construction site. PHOTO: REUTERS

KARACHI: Despite its slogan of ‘Roti, Kapra aur Makan [food, clothing and housing]’, the Pakistan Peoples Party (PPP) has failed to provide low-cost houses and plots to impoverished people in the province. The ruling party has only succeeded in catering to just a few rural areas of Sindh where a limited number of people were provided small houses of one or two rooms.

Apart from Khairpur, work on any project for providing low-cost housing or plots to poor families was not initiated in any urban city. Being in power in Sindh since 2008, the party’s performance in this regard has not been satisfactory. The Sindh government’s lack of interest, corruption in government departments and administrative problems are some of the reasons that have contributed towards this failure.

A project was indeed announced to provide poor people affordable homes and plots in all the cities of Sindh, including Karachi. However, till date when the second tenure of the PPP government nears its end, work on the project has not been initiated.

According to this project, residential plots at low prices were to be provided to around 15,000 underprivileged families. Work on this project was to be commenced under the supervision of the Shaheed Benazir Bhutto Housing Cell that had been established by the chief minister.

According to sources at CM House, former chief minister Qaim Ali Shah had approved the allocation of 350 acres of land in different parts of Karachi for housing projects. However, as of now, this land has not been transferred to the Shaheed Benazir Bhutto Housing Cell.

With the efforts of the new administration of the housing cell, the land utilisation department issued challans worth Rs170 million to transfer ownership of the land to the housing cell in June 2016. It has been reported that officers of the Accountant General Sindh delayed the release of payment. Resultantly, the funds lapsed and the transfer of the land was delayed.

Due to the delay in the project, the land near Surjani town was eventually illegally occupied. It is feared that the rest of the land which was to be given to underprivileged persons at low costs may also be encroached upon.

Fate in other districts

Similarly, a project was planned to provide plots at low rates to 300 families in Hatteri Town in Hyderabad and 19 acres of land was allocated for the purpose. In this regard, Rs4.6 million had to be provided to the land utilisation department so that it could gain ownership of the land. However, the land has yet to be acquired.

The former chief minister had launched Peoples Housing after the PPP came to power in 2008 to provide low-cost homes and plots to low-income groups. It was later renamed the Shaheed Benazir Bhutto Housing Cell. Like many other government organisations in Sindh, complaints of financial irregularities and lack of administration pertaining to this cell were reported in its initial years. The quality of construction by the cell was one of the areas that was seriously questioned.

Due to such accusations, the National Accountability Bureau arrested the former chairperson and technical director of the cell, Manzar Abbas, along with several others in 2015.

According to the incumbent administration director of the cell, Syed Sabir Hussain Shah, numerous steps have been taken by the cell to improve the quality of its construction work.

The cell also wants to ensure that families who receive the plots or houses at low prices are selected through a transparent mechanism, Sabir said. In this regard, steps are being taken to include the participation of non-governmental organisations in the process of selection, he added.