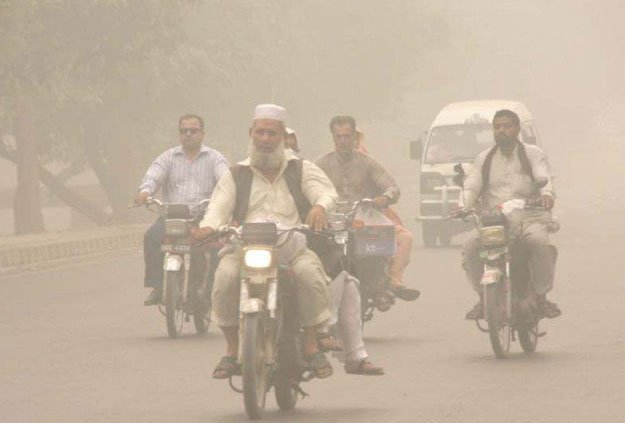 Motorists drive through a thick blanket of fog. PHOTO APP

Conditions in Punjab remained dense and foggy as smog remained prevalent early on Friday morning disrupting air travel and transportation in the province.

Multiple flights – both domestic and international – have been temporarily suspended. Flights from Lahore/Islamabad to multiple destinations such as Dubai, Abu Dhabi, Colombo, Doha, Muscat have been delayed for hours at end.

The Met Office also issued a statement saying, “Dense/foggy conditions are expected to prevail in Punjab”.

The smog has also disrupted on ground transportation, leading to increasing difficulties for residents. Train schedules are also changing in accordance with the weather conditions as well.

Officials at the Allama Iqbal International Airport, Lahore, have said that after “multiple fluctuations”, flight operations have now resumed and that an Emirates flight had landed successfully giving them confidence to resume flights.

“Many flights had been delayed early morning due to bad visibility in the region,” the officials stated. “However, we are now resuming flights slowly.”

“Due to the weather conditions (dense fog and smog) prevailing in the country, some of PIA flights operating on Friday have been cancelled and revised,” PIA spokesman Mashood Tajwar said on Thursday.

PIA spokesman also added, “Weather condition is expected to prevail for the next few days and is beyond the control of the airline. PIA has to adjust the timings of its flights due to such weather conditions, as the airline cannot operate flights with poor visibility and also keeping in view the safety requirements. These results in either cancellation of the flights or flights operated with delays or re-routed.”

Keeping in view the weather forecast for Friday 10 November, the following flights have been cancelled and revised:

PK 313 Lahore-Karachi and PK 853 Islamabad-Lahore have been cancelled.

Earlier today, the Punjab Environment Protection Department claims the smog has finally dissipated over most of the province as skies cleared after roughly two weeks of the smoke infested fog. However, a few hours later, the smog seeped back into Punjab.

NAB to use grading system