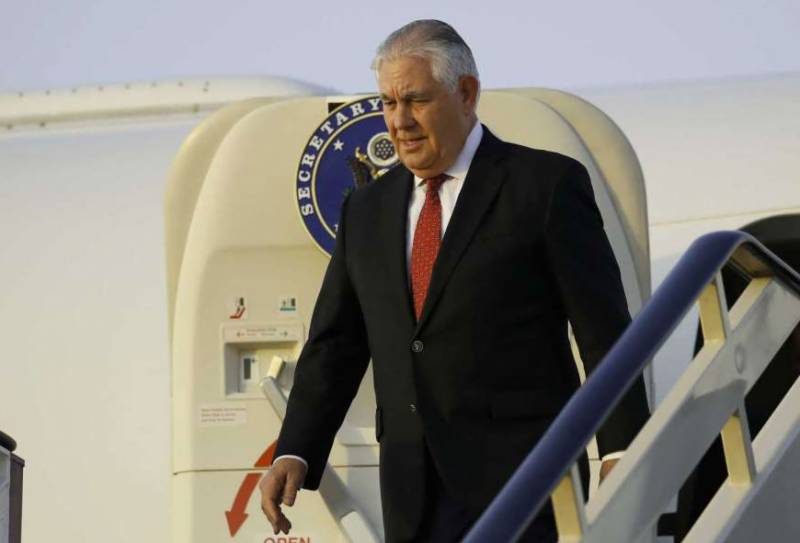 US Secretary of State Rex Tillerson is set to arrive in Islamabad on his maiden visit later this month. PHOTO: REUTERS

ISLAMABAD: US Secretary of State Rex Tillerson is due in Islamabad today (Tuesday) to meet Pakistan’s civil and military leadership for crucial discussions on resetting the bilateral ties and Afghanistan endgame.

Tillerson, who is on a tour to regional countries, is the first high-ranking American official to travel to Islamabad after President Donald Trump unveiled his strategy for Afghanistan and South Asia in August.

The new policy – which envisages greater emphasis on the use of force and points a finger at Pakistan for “not doing enough” against certain militant groups – has caused strains in ties between Pakistan and the US.

Joint military operation out of question, Pakistan will tell Tillerson

However, the recent rescue by Pakistan Army and intelligence agencies of an American-Canadian couple somewhat eased simmering tensions between the two countries.

Pakistan’s swift action has won praise from Trump and other American officials.

A senior Foreign Office official says there has been greater emphasis on engagement now after initial rhetoric from the Trump administration.

There has been a flurry of engagements between the two countries over the past few weeks.

The engagement process is expected to continue as Defence Secretary James Mattis is to travel to Islamabad after Tillerson’s visit.

According to the Foreign Office official, Tillerson’s visit will set the tone for future engagement between the two countries on bilateral as well as regional issues.

Tillerson, who paid an unannounced visit to Kabul on Monday, said he was going to Pakistan to discuss US requests for specific action against the Afghan Taliban and other extremist groups allegedly based there.

While the US has its list of demands, Pakistan has its own grievances ranging from the Trump administration’s attempts to undermine its sacrifices against terrorism to giving India a greater role in Afghanistan.

Although the demand seeking action against certain groups remains the same, there has been considerable change in the tone of the US administration after Pakistan rescued the American-Canadian couple.

Within days of the rescue, US and Afghan forces launched drone and conventional airstrikes in Paktia and Khost provinces of Afghanistan. Umar Khalid Khurasani, the chief of outlawed Jamaatul Ahrar, was reportedly killed in one of those drone strikes.

The US and Afghan forces’ willingness to target anti-Pakistan elements across the border suggests a new understanding among the three countries to deal with the common threat of terrorism.

Officials familiar with the agenda of talks between the Pakistani authorities and top US diplomat told The Express Tribune that the government would present its view on the new Afghan strategy as well as wider regional issues.

Apart from Afghanistan, tensions between Pakistan and India are likely to come up for discussions during Tillerson’s visit. The secretary of state will depart for New Delhi in the evening after daylong engagements in Islamabad.