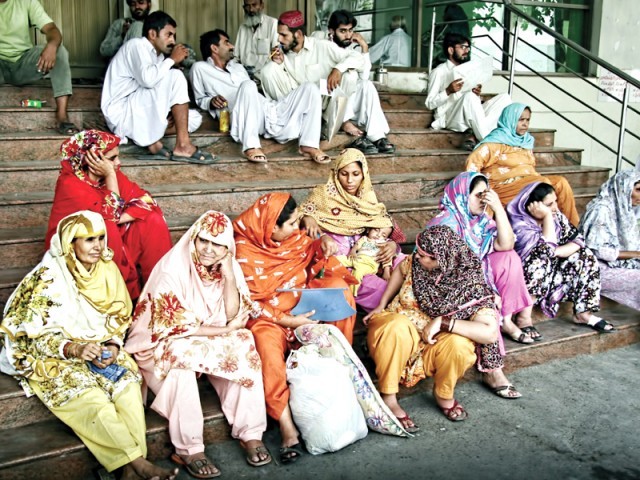 LAHORE: The callous attitude of staff at government hospitals seems to have become a matter of routine as a woman gave birth to a child on the road of an underpass in the premises of the Ganga Ram Hospital.

The incident occurred after she was denied admission and a bed at the government-run medical facility. This event comes on the coattails of another recent one in which a mother gave birth in front of the Tehsil Headquarters Hospital Raiwind, situated half-e-kilometre away from the resident of ousted prime minister Mian Nawaz Sharif.

A video available with The Express Tribune showed that relatives of the mother-to-be, while covering her with the shawls and cloth, repeatedly requested passersby and bystanders to respect her privacy.

It was a scene, which observers said, would make philanthropist Sir Gangaram, a pre-partition businessman and the man after whom the hospital was named, turn in his grave. They added that the great humanitarian would have undoubtedly been embarrassed that the crying mother was provided with no doctor to relieve her labour pains.

Minister for Health Khwaja Salman Rafique immediately paid a visit the hospital and ensured the aggrieved family of every possible step to relieve their burden.

However, the only request of the woman’s relatives, who belonged to a rural area of Punjab, was to ensure better hospital facilities. Revealing her ordeal, Ramzana Bibi, the mother of the patient, said the administration refused to admit the latter due to the lack of beds and extra patient burden.

“We requested several times, but no one paid any heed to our grievances. My daughter has given birth on the cold floor,” she cried.

“We have nothing but respect and the health department has taken that from us,” she bemoaned.

Even after the woman gave birth, the hospital administration still turned them away and the family could not receive treatment till hours later. That was only once the media took up the issue.

A doctor at the Gangaram hospital, seeking anonymity, said the incident shows that the chief minister’s claims of providing the best medical facilities to the masses of Punjab was nothing more than a media campaign.

Hospital officials, on the other hand, claimed that the woman had been treated at the medical facility on Wednesday and Friday’s incident occurred because they had arrived late and were asked to wait.

During his visit to Gangaram hospital, the Punjab Minister for Health Khwaja Salman Rafique suspended emergency director Dr Abdul Ghaffar and ordered the formation of a four-member committee to probe the matter. Punjab Chief Minister Shahbaz Sharif also took note of the incident.