Dr Farooq was a foundi­ng member of the party and was killed in 2010 in London
By Our Correspondent
Published: September 17, 2017
Tweet Email 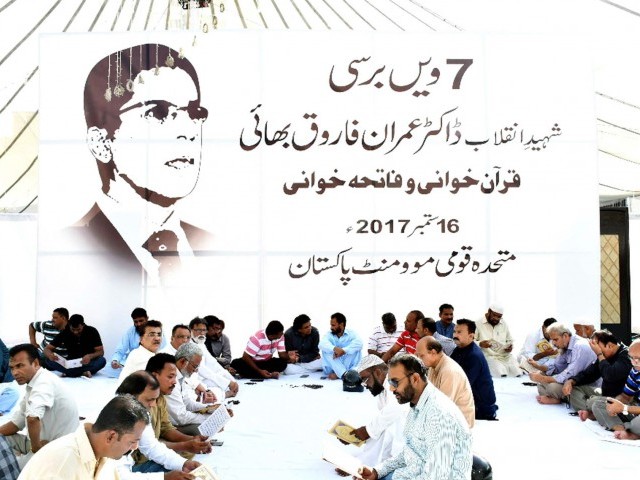 The Pakistan faction of the party organised a Quran Khwani at its headquarters on Saturday. PHOTO: PPI

KARACHI: On the occasion of the seventh death anniversary of Dr Imran Farooq, one of the founding members of the Muttahida Qaumi Movement, the Pakistan faction of the party has demanded the arrest of the culprits behind his murder, whilst the London faction has maintained that those who committed this crime would not escape the wrath of divine justice.

Dr Farooq was one of the prominent members of the MQM since its inception as a student organisation and was arguably the mastermind behind the party’s ideology, constitution, discipline and structure. He was killed on September 16, 2010 in London near his residence.

As the MQM has now split in two more factions both the groups held separate programmes to mark their fallen colleague’s death anniversary and remember him.

Farooq Sattar, who heads the Pakistan faction of the MQM, remarked while talking to the media at his group’s temporary headquarters in Bahadurabad on Saturday that the authorities must arrest the culprits who were directly or indirectly involved in the murder of Dr Farooq.

Meanwhile, MQM founder Altaf Hussain, in a statement issued from London, said that Dr Farooq’s loss was one from which they could barely recover. Altaf added that the murder was planned to inflict a huge loss on the MQM and then conspired to put its blame on the party.

Like many other investigations, the murder case is also embroiled in controversies, as those held for the felony are workers of the MQM and it is maintained that party leaders wanted to side line Dr Farooq, fearing that he may prove harmful later. He was close to the party chief but in his later years had detached himself from the party owing to some differences not known to people outside the party.