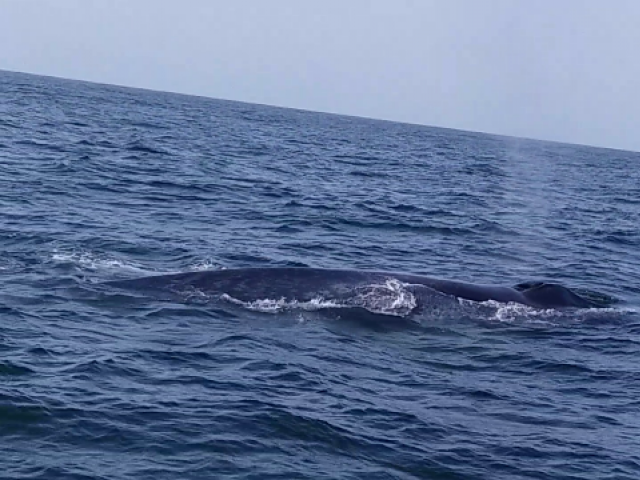 KARACHI: To the utter surprise of experts, a gigantic mother blue whale and her calf have been sighted off Churna Island, near the coast of Karachi. This is the first sighting of living blue whale, the largest animal of the world, in Pakistani waters.

WWF-Pakistan’s trained skipper Saeed Zaman while fishing for tuna on Sep 11 spotted a very large-sized animal and its baby in the waters. According to him, the mother was around 17 metres in length, almost the same size as his fishing boat.  The size of her calf, however, could not be assessed as it did not surface much.

Earlier, a number of skeletal remains and beached blue whales were reported from Pakistani waters. The last such dead specimen was observed at Khuddi Creek along the coast of Sindh in August 2014.

Although 47 sightings of baleen whales have been reported from the coast of Pakistan in 2016, none of them could be attributed to the blue whale. It may be noted that on September 10, WWF-Pakistan trained fishermen recorded the first live pair of sperm whales on the coast of Balochistan.

Blue whales are considered to be the largest animal to have ever existed on this planet with recorded length of 30 metres. Global population of this species is estimated to be between 10,000 and 25,000 and is considered as endangered according to International Union for Conservation of Nature (IUCN) Red List.

A blue whale typically gives birth once every two to three years after a gestation period of 10 to 12 months. The calf weighs about 2.5 tonnes and is usually around 7 metres in length. Despite having an enormous body, a blue whale’s diet includes tiny shrimplike animals called krill or pelagic shrimp.

According to experts, during certain times of the year, a single adult blue whale consumes about 4 tonnes of krill a day. The Arabian Sea is known to have a number of species of pelagic shrimp which could be the reason for the presence of this animal in these waters.

WWF-Pakistan Technical Adviser Moazzam Khan said the first live record of a blue whale sighting and that too with a calf is a remarkable indication of the diverse marine life along the coast of Pakistan.

He attributed the recent increase in sighting of whales to the effective monitoring of WWF-Pakistan’s crew based observer programme. More than 100 fishermen, mainly skippers, have been trained by WWF-Pakistan to record sightings of megafauna – whales, dolphins, whale sharks, Mobula rays, turtles and sunfish – as well as to ensure the safe release of such animals in case of any entanglement.

Diving into the wreck: Singing the blues for the Karachi sea

Rab Nawaz, senior director programmes of WWF-Pakistan, lauded efforts of fishermen in recording the clip. He said Churna Island and its immediate environment are biodiversity hot spots and are abode of large whales, whale sharks and sunfish apart from being a major coral habitat, which needs protection.

“WWF-Pakistan is working very closely with a number of NGOs, Ministry of Climate Change and Forest and Wildlife Department of the Government of Balochistan to declare Churna Island as a Marine Protected Area (MPA),” he added.

‘Neglect and pollution will destroy breathtaking spots off Karachi’s coast’

He urged all stakeholders for early declaration of the island as an MPA in order to conserve and protect the biological hotspots, blue whales and other marine animals whose population is on the decline so that they may continue to feed, breed and bask in the area.

NA Speaker on how to ‘thwart dictators’