Free the entang­led 7.5-foot-long creatu­re, releas­ing it back into ocean off Baloch­istan coasts­
By Mudaser Kazi
Published: August 18, 2017
Tweet Email 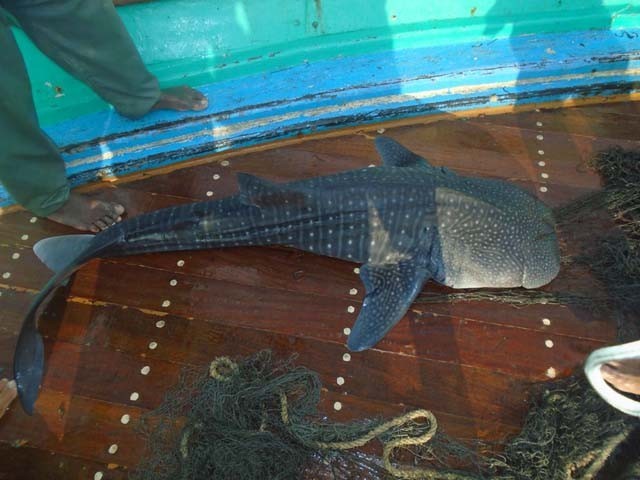 Once freed from the net, the pup started to move slightly, so assuming that it was alive and may survive, the captain immediately instructed the crew to release it back into the water. PHOTO: WWF-Pakistan

KARACHI  : Quick thinking by fishermen, trained by the World Wildlife Fund (WWF)-Pakistan, helped them to rescue a 7.5-foot-long juvenile whale shark trapped in a gillnet and release it back into the ocean.

The fishermen, led by Captain Ali Akbar, came across the pup while they were fishing for tunas about 2 kilometres north of Churna Island in Balochistan on Thursday.

According to Akbar, the baby whale shark was entangled in the net they had placed for catching fish. At first, the crew tried to disentangle the pup while the net was in the water, but when it did not show any body movement they heaved the net on board assuming that the pup had died.

However as the pup was freed from the net, while it was on board, it started to show some movement. After seeing the pup move, the captain quickly realised that the animal may survive and immediately instructed the crew to safely release it back in the waters.

Baby dolphin dies from stress as tourists take selfies with it

To the utter surprise and jubilation of the fishermen, the whale shark did come to life and according to them encircled the boat which they believe was the pup thanking the fishermen, before it disappeared in the deep sea. 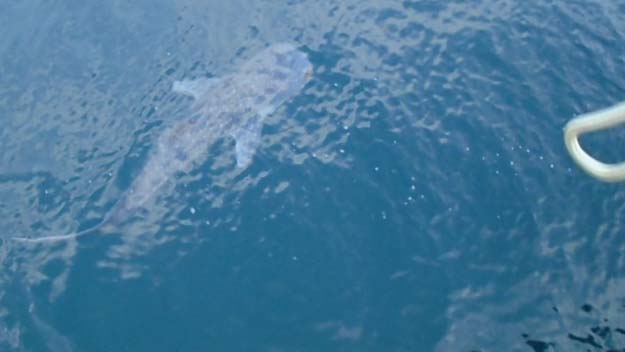 This is not the first time that a whale shark has been rescued by fishermen – however in most cases the pups seldom survive after they are entangled.

Interestingly, since the start of the WWF-Pakistan’s Observer Programme, in October 2012, a total of 61 cases of whale sharks have been documented.

According to WWF-Pakistan Technical Adviser (Marine Fisheries) Muhammad Moazzam Khan, “A healthy population of whale sharks has been reported from the Pakistan coast.”

The adviser said that this year’s fishing season for tuna, starting from August 1, had also brought the good news of the safe release of Indo-Pacific finless porpoise earlier this month, apart from the rescue of juvenile whale shark.

Moazzam said aimed fisheries for whale sharks used to exist there since ages and were first documented by Buist in 1850, however, they started to decrease in 1970s.

He blamed a lack of awareness for decrease in their population saying, “Some fishermen used to kill the whale sharks that were entangled in their nets for liver oil.”

According to the adviser, now hardly any whale shark dies, due to entanglement in fishing gears, because of WWF-Pakistan’s ‘awareness and training programme’ which started five years back.

Moazzam also said that the population of whale shark in Pakistan seemed stable, but extremely prone to entanglement in fishing gears, habitat degradation and marine pollution.

Meanwhile, WWF-Pakistan’s Senior Director Programmes Rab Nawaz lauded the role of Sindh and Balochistan Fisheries Departments that proactively legislated for the protection of whale sharks in 2016.

“This established a basis for taking action against the fishermen who deliberately caught the whale shark for commercial use,” said Rab, adding that in 2012 and 2013 when two whale sharks were deliberately killed by fishermen, the incidences received extensive media coverage which led to other fishermen targeting the species.

However, now with legislation in place whale shark fishing had stopped altogether in both provinces, he said.

“The release of the juvenile whale shark will send a good message to the world as the International Whale Shark Day will be observed on August 30,” he said.

Currently, the Balochistan government is deliberating to declare Churna Island as a marine protected area (MPA) which will make it an important basking, feeding and breeding area for the species.