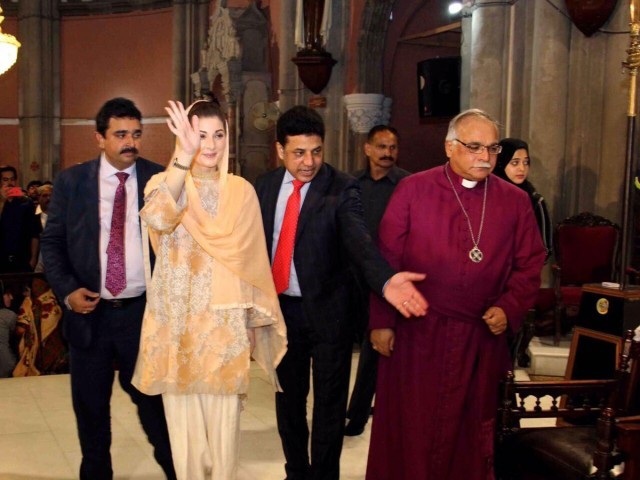 The Sacred Heart Cathedral of Lahore on Monday issued an apology after coming under scrutiny for allowing Pakistan Muslim League – Nawaz’s Maryam Nawaz to use the pulpit to make a political speech.

In a video, Fr Francis Gulzar revealed that Provincial Minister Tahir Khalil Sandhu and MPA Shakeel Marcus had informed the cathedral administration that the ousted prime minister’s daughter wished to visit the church to say prayers for her ailing mother, Kulsoom Nawaz.

“Keeping in mind that a place of worship is a home for prayers, the church administration allowed Maryam Nawaz to visit,” said Francis. “It was decided unanimously that the lady will speak about herself and her family members’ association with Christian schools.”

However, soon after saying prayers for her mother and thanking the Christian community, Maryam’s speech took a political turn. The visit became a campaign event with the PML-N leader urging congregants to cast vote in favour of her mother, the candidate for NA-120.

Day6:Very very thankful to the Christian brothers & sisters for blessing me with heart-touching prayers. Visited the Regal Church in NA-120. pic.twitter.com/EhgeGNFOI1

In the statement, Francis said that Maryam Nawaz’s political address from the Sacred Heart Cathedral’s pulpit had hurt the sentiments of many, including the church administration. “For which Honorable Archbishop Sebastian Francis Shaw and church administration apologises,” he said.

In the statement, the church administration stressed that while its doors will not be shut, it will not allow its space to be used for political activity.

listen to this. the poor Bishop got played and was even chided by Vatican: pic.twitter.com/Kng97cxj8V

Asif travelling to Beijing for talks on Trump plan