PCB names Sarfra­z as captai­n of 16-man squad which will play three T20Is in Lahore­
By Our Correspondent
Published: August 25, 2017
Tweet Email 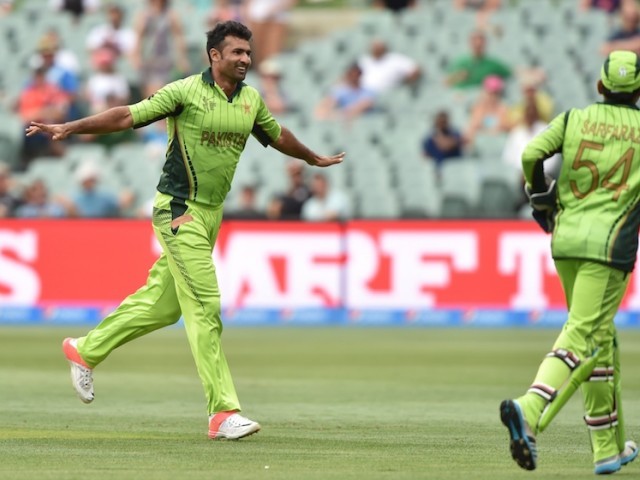 BACK IN THE MIX: Sohail Khan was ignored for the Champions Trophy but made the cut against the World XI which will visit in September. PHOTO: AFP

KARACHI: Pakistan Cricket Board (PCB) on Friday named a 16-man squad for the Independence Cup in September, which will see a visiting World XI take on the host team in three T20Is in Lahore.

The highlight of the squad, which will be captained by Sarfraz Ahmed, is the induction of right-arm pacer Sohail Khan, who was the best bowler of the second edition of the Pakistan Super League but missed the cut in the winning Champions Trophy squad.

Meanwhile, left-arm pacer Wahab Riaz, who suffered an ankle injury during the first game of the Champions Trophy against India, was dropped from the squad which will face a South Africa skipper Faf du Plessis-led side.

“The team has been selected keeping in mind the conditions and the recent performances of some players in the domestic and international tours. The players consist of a combination of the fine blend of youth and senior players,” chief selector Inzamamul Haq was quoted as saying in a PCB press release.

Inzamam added that some new players were given a chance for the T20Is, which will be played on September 12, 13 and 15, due to their ‘splendid’ performances in the domestic events

“Fahim Ashraf, Ruman Raees and Aamer Yamin make a place in the squad due to their splendid performance in the domestic tournaments, whereas Sohail Khan makes a comeback,” explained Inzamam.

Moreover, Inzamam added that performing in front of a home crowd would be a confidence booster for young players. “It would be good for the young players to get a chance to play on the home ground and perform in front of the local public,” he said.

“I’m very glad to see so many players agree to tour Pakistan for this series,” pace legend Wasim Akram was quoted as saying by the PCB. “I’m sure these matches will go a long way in portraying a positive picture of the country. The touring players will get to experience the hospitality and love for the game in Pakistan first hand and that could hopefully lead to more tours.”

Wasim’s partner in crime with the cricket ball, Waqar Younis, believes the time of the tour is perfect.

“This home series against a World XI could not have been better timed,” said Waqar. “Pakistan produced a superb performance just a few months ago by winning the 2017 Champions Trophy and the players deserve the opportunity to display their class at home venues.”

Collingwood admits he is tempted to play T20I series in Pakistan

Former Pakistan T20I captain Shahid Afridi said everyone who made this series possible should be thanked for their efforts.

“I think we all owe a big thanks to these international cricketers, the global cricket community, the ICC and the PCB for taking this positive step,” said Afridi.

“We all should be grateful to the players and the ICC for ensuring that the series takes place,” said Ramiz. “These might be baby steps before some giant steps are taken. For now, let’s back this to the hilt, this is great news for all cricket fans as we are now set in the right direction.”