Let us not lose her legacy, let us receiv­e her baton and make a new beginn­ing where Dr Pfau left
By Shakil Durrani
Published: August 19, 2017
Tweet Email 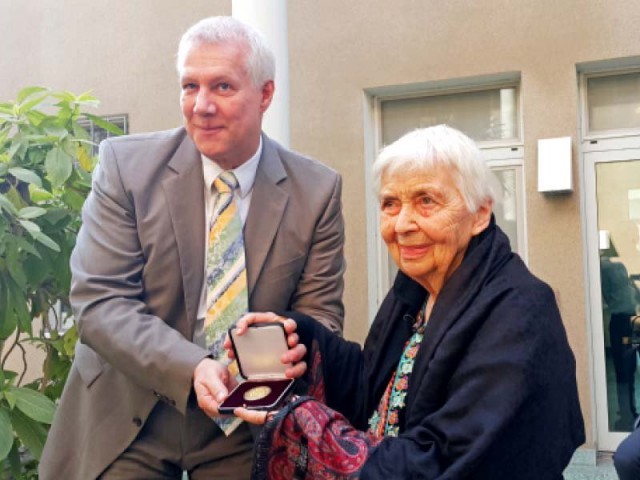 Rarely has lady luck rescued the most helpless section of a society in a manner that was seen in the case of the ‘untouchable’ leprosy sufferers of Pakistan. These abandoned people lay prostrate at the lowest possible depth physically, socially and materially. Providence acts in its own special ways when human hopes recede and so sent us Dr Ruth Pfau. The German Christian missionary was on her way to India on a medical mission and had merely stopped over in Karachi to change planes. Her Indian visa being delayed, she was taken around to see the leprosy patients in Karachi. This was her introduction to Pakistan. More specifically, this was when she first came in contact with her lasting love; the so-called ‘lepers’.

One look at their plight and her mind was made. She pledged to help the leprosy patients all over Pakistan (and Afghanistan). She fully honoured her word and almost single-handedly cleansed the country of leprosy 50 years later. The effort was never for all the awards and acclamations she was bestowed with by a grateful Pakistani nation. The effort was motivated by the love of the Almighty and His people. The prime minister’s announcement of a state funeral for Dr Pfau was most appropriate as was the tribute by the army chief. This is one occasion where all Pakistanis are on the symbolic ‘same page’.

State funeral for Dr Ruth Pfau being held in Karachi

I was very fortunate to have met and known Dr Pfau for nearly three decades in relation to her life’s mission. Though I have also met some of the biggest names of the last quarter of the 20th century from different spheres, including Nelson Mandela, Edhi sahib and Princess Diana (sadly, I did not meet Mother Teresa), but my greatest hero ever would always be Dr Pfau. I remained associated with her dedicated efforts in the Malakand division, the tribal areas and then in Gilgit-Baltistan. She impressed everyone by her loving care for those affected by leprosy when most would not even look at, let alone touch, these unfortunate people.

One of her stories, I heard from someone, needs sharing. In a certain district a deformed victim of leprosy was placed in a nearby cave to prevent the spread of the disease. Left-over food was provided to him knowing he had not long to live. His hair was full of lice, while bugs and worms gnawed on him. Enter our heroine. She washed and cleaned him, fed and treated him in comfort. Allah healed him so much that he became a useful member of society. If there is a better example of sawab, a noble deed, kindly inform me as well.

I would like to quote the following lines relating to Dr Pfau from my forthcoming book. Incidentally, I had requested her a few months back to be the chief guest at its launch. Now I must be content with her memories only.

‘The greatest individual I ever recall meeting and getting to know was a German doctor, Ruth Katherina Pfau. This saintly caregiver, through the Marie Adelaide Centre, devoted her entire life to eradicating leprosy from Pakistan and later concentrated her attention on tuberculosis control. She was my hero and it is a small coincidence that we share our date of birth, September 9th. She was meant to break her journey in Karachi on her way to Bombay in 1960, but thanks to the incompetence of the Indian bureaucracy, her visa was delayed inordinately. She therefore decided to stay and work in Pakistan. In a sense we owe the eradication of leprosy in Pakistan to the incompetence of the Indian bureaucracy. This was a silver lining because our bureaucracy could not have achieved it on its own. As she lived most of her life in Pakistan, I once asked her what was the one trait she found irksome in the Pakistani people. She was prompt in her reply. Whenever and to whomsoever she made a request for assisting patients, invariably replied that there was ‘no problem madam no problem’. The problem, she thought, was that ‘there was actually a problem’ because rarely did people stand by their word. For most Pakistanis, a promise or a commitment is vacuous and never really meant to be followed up. Lip service is cheap and is readily offered but do not expect most Pakistanis to follow up on their commitments. A word is never a bond for most people here. One last word about Dr Pfau may be in order. At the golden jubilee celebration of the successful battle against leprosy in Swat, Chief Minister Mir Afzal Khan was the guest of honour to a lunch, which she insisted, only consist of dal, roti, pani (lentils, bread, water), with everyone, including the chief guest, paying for the food. This was the only function I have seen where money was actually raised while celebrating a previous achievement. When will we learn such fine art?’

As Pakistan bids farewell to its most distinguished daughter, I hope that the medical ward named after her in the Gilgit hospital retains her name plaque and the three jeeps of her organisation in K-P are retrieved from unlawful possession.

It may sound strange that Dr Pfau, our great hero, was a woman and that too from a minority community — two segments generally denied full rights here. The white in the flag may be acquiring greater meaning as Pakistan turns 70. Let us not lose her legacy. Let us receive her baton and make a new beginning where Dr Pfau left. The Marie Adelaide Centre has more work to do by reminding us all of our obligations because we tend to forget easily.