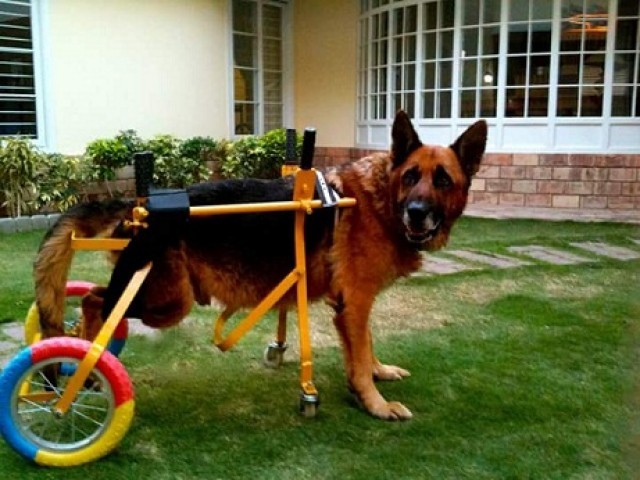 Niazi was inspired to design such wheelchairs by her own need for her pet German shepherd, the late Duke, whose rear limbs were paralysed because of old age. PHOTO: Courtesy Rubaba Niazi

KARACHI: In a society where most animals are neglected, especially those who are handicapped and need human aid the most, Rubaba Niazi decided to go against all odds to provide better care for handicapped animals.

“I was told by majority of the vets that nothing could be done for crippled animals. Just put him to sleep, they told me,” Niazi told The Express Tribune. People either kill or abandon handicapped animals in order to get rid of them.

Bringing a ray of hope, Niazi has taken the lead in designing wheelchairs for handicapped animals, which she provides free-of-charge to those who cannot afford it.

City’s troubled animals welcome all to their impressive castle

The wheelchairs are also made for stray animals with a hope that the animals will survive.

Niazi was inspired to design such wheelchairs by her own need for her pet German shepherd, the late Duke, whose rear limbs were paralysed due to old age.

Duke was getting weaker with time and Niazi, along with her family, tried to use various methods for his survival and finally conceived an idea to make a wheelchair for him.

“He [Duke] would look straight into our eyes as if to encourage us not to give up. One of my friends discussed the idea with me and I started researching online on wheelchairs [for animals] and finally made one,” she said, adding that she worked with welders, brought random belts and finally managed to make a four-wheeler in which Duke could actually balance himself and walk.

Niazi shared that it was a difficult task to manage her pet in a wheelchair, but months of hard work paid off as Duke regained his strength and soon started running with a big smile on his face.

“This successful venture was appreciated by many organisations,” she said.

With a small team comprising a welder and painter at her disposal, Niazi personally visits and measures the size of an animal needing a wheelchair.

“The wheelchair caters to every need of the animals for their comfort, including adjustable sizes as they all are custom designed,” she shared, adding that it is not an easy task to balance a handicapped animal on the wheel.

She also donates wheelchairs to organisations working to provide shelter to stray animals.

Shelter launched for victims of abuse

Whenever Niazi is approached for a wheelchair, she tries to educate the owners on the responsibility and commitment required to take care of a handicapped animal.

“Raising a pet is exactly like raising a child,” she said, adding that the pet wheelchairs have given hope to many animals deserving of a second chance.

“It takes us two weeks to prepare a wheelchair, mainly because it goes through different stages,” she said.