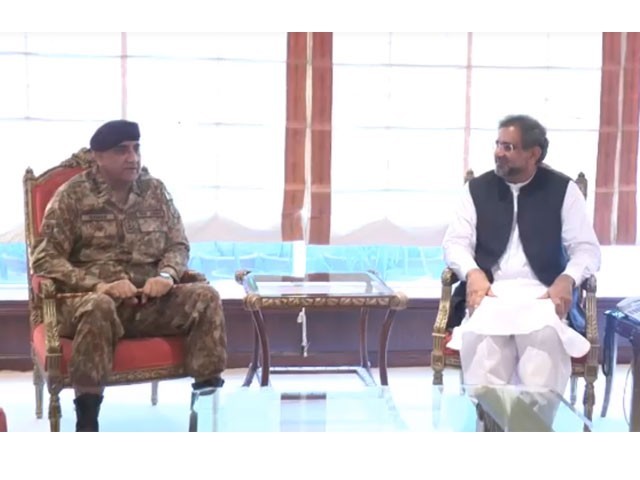 Army chief General Qamar Javed Bajwa called on Prime Minister Shahid Khaqan Abbasi on Tuesday, a week after he was elected as the country’s new chief executive replacing Nawaz Sharif who was disqualified from office by the Supreme Court for hiding his assets.

This was the army chief’s first meeting with the country’s chief executive in a month as General Bajwa last attended a meeting of the National Security Committee presided over by Premier Abbasi’s predecessor on July 7.

Usually the army chief meets a new prime minister soon after his election but apparent strain between the civil-military relationship prevented Gen Bajwa from visiting the Prime Minister Office.

Gen Bajwa kept a low profile since the Panamagate case entered its decisive phase and subsequently did not hold any meeting with Sharif once the Joint Investigation Team (JIT), probing into the offshore assets of the Sharif family, concluded its investigations.

According to a brief handout issued by his office, Prime Minister Abbasi and Gen Bajwa discussed “professional matters pertaining to the Pakistan Army”.

The prime minister lauded the role of the armed forces in counter-terrorism operations, including Operation Radd-ul-Fasaad and Khyber-IV, read the handout.

“The entire nation is proud of the sacrifices rendered by security personnel in ridding the motherland of the menace of terrorism,” he added.

The prime minister’s acknowledgement of the army’s campaign against terrorism aside, the civil-military relationship is believed to be far from ideal.

The Supreme Court ruling that disqualified premier Sharif has apparently deepened suspicion within the ruling party and also created the issue of trust with the military leadership.

Since his ouster from the Prime Minister Office, Sharif has been publicly alluding that he has been deposed as part of a conspiracy. In his interaction with senior journalists on Monday, he claimed the decision of his removal had been taken long ago but only an ‘excuse’ was needed.

He also questioned why only elected prime ministers were sent home unceremoniously and dictators were not held accountable for usurping power and violating the Constitution.

Sharif’s move to lead a rally raised many eyebrows with many interpreting his move as an open defiance and challenge to both the judiciary and the military establishment.

The army chief, although did not directly comment on the Panama verdict, his recent statements attracted media spotlight. Following Monday’s corps commanders’ conference, Gen Bajwa stressed the need for upholding the rule of law and supremacy of the Constitution.

It is believed that the security establishment is against Sharif’s travel to Lahore from Islamabad via GT Road because of security threats as well as fear of political instability.