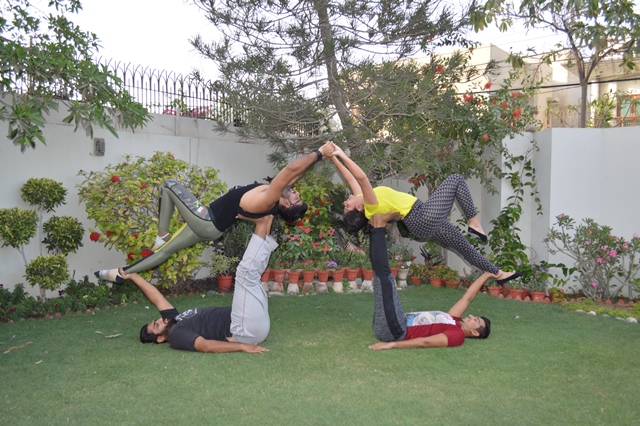 KARACHI: No one thought what started off as a casual friendship revolving around bicycling would develop into a community building initiative amongst a group of friends.

Ajlaan Raza, Aroon Kumar, Dhanak Aijaz, Zain Warsi and many of their friends who discovered AcroYoga as a healthy activity to keep fit now have the honour of being the first ever group to organise this activity in Pakistan. AcroYoga is a mixture of acrobatics and yoga – a globally-recognised fitness practice that involves a minimum of two individuals.

The group of friends, who voluntarily teach people about AcroYoga, have formed Karachi AcroYoga to gather people and teach them about the practice. Karachi AcroYoga is a community building initiative in which the friends get together and practice AcroYoga all over Karachi.

It is a completely free-of-cost endeavour that connects the community through master classes held at various locations such as public parks. The team has been training for months and now they are sharing the joy of practicing AcroYoga with others in an attempt to build a community. The response so far has been phenomenal. 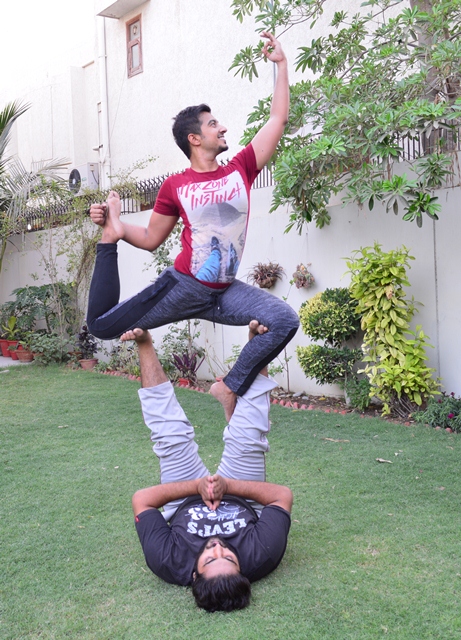 “We all cycle with Critical Mass Karachi and after that on Sundays we meet at a friend’s place and play games,” said Raza. Kumar said in October, 2016 they saw some AcroYoga poses online and were interested in trying them out themselves.

The groups tried imitating the poses and posted pictures of their attempts on their Facebook and Instagram accounts. Their attempts garnered a great deal of praise from their friends online.

Raza has been practicing yoga since he was a child, Kumar is a Brazilian Jiu-Jitsu martial artist, Aijaz has wanted to be a gymnast since childhood and has tried her hand at many sports, while Warsi is a trainer at a gym. The group all have nine to five jobs in the sales and marketing industries and spend around six to eight hours after work practicing AcroYoga and learning new poses from YouTube videos.

“We found the poses on the Internet and have been learning them every day,” said Raza. Meanwhile, Aijaz explained that they have now mastered around 20 poses and are still practicing more than 50 others.

AcroYoga requires at least two participants but the maximum number of participants can vary according to the pose, said Warsi. The activity has a base, a flyer and a spotter. “The base is the one who will hold the weight of the flyer, who balances themselves on the base and performs the pose, while spotter is there in case anyone falls,” Aijaz said.

Karachi AcroYoga was formally started in February, 2017 after a photographer friend of theirs, Syed Faryab Shah, found their work interesting enough to photograph. The photo shoot never materialised but forged a path for their future work. 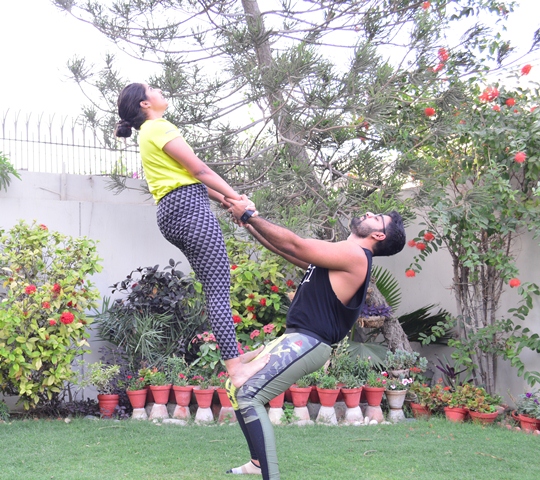 Many poses are very physically demanding and can lead to aches and pains if the muscles are not treated properly. PHOTO: COURTESY SYED FARYAB SHAH & SAAD SAEED

From then, the team has conducted two master classes – one in May and another in July – and has an upcoming class on August 6. The team also conducts events in public parks to spread awareness about AcroYoga.

The master class is usually conducted at a team members’ house and is a two-hour session in which they teach participants the basics of AcroYoga. “We do a 15-minute warm up, partner poses, group poses and a cool down at the end,” said Raza. Aijaz said they demonstrate the poses for participants and then help them imitate the poses one by one. The reason they have a warm up and cool down is because the activity is very physically demanding and can lead to aches and pains if the muscles are not treated properly.

The public events are for two hours and are held in public spaces such as Zamzama Park. The events are a demonstration for the public to learn about AcroYoga.

Right now they are the only group engaging in this practice in Pakistan. “There must be people practicing AcroYoga in isolation but there is no group who has been working on community building,” said Aijaz.

“Our aim is to build a community who can practice Acroyoga even when we are not there and can conduct classes themselves in other parts of the country,” said Raza, adding that they want the practice to spread throughout the country.

The group will soon be launching a Facebook page to spread awareness about AcroYoga in Karachi.