Muhammad Ali's Muslim faith is being scrubbed off his legacy

Muhammad Ali's Muslim faith is being scrubbed off his legacy 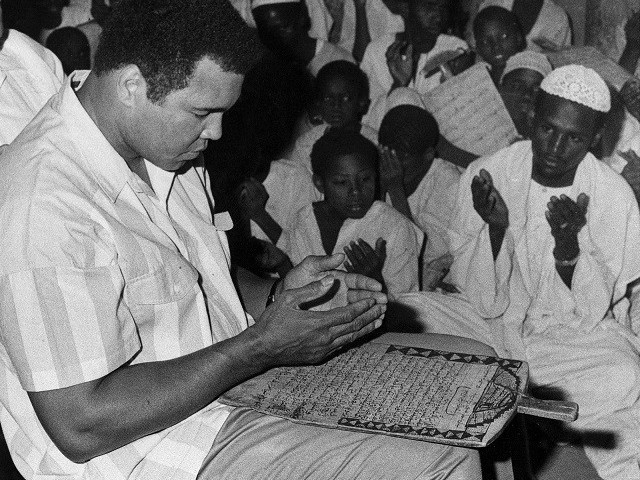 A little over a year ago, the world was saddened by the news of boxing legend Muhammad Ali passing away. A year later, the philanthropist remains memorised as a civil rights warrior, a humanitarian, and a trailblazer for Parkinson’s disease awareness.

But the most significant part of his identity – converting to Islam – seems to be disappearing from the narrative. A look through the legend’s official social media accounts and we find his spiritual journey is depicted only with a mention of “his early relationship with the Nation of Islam” on Facebook, Instagram and Twitter.

Authentic Brand group [ABG], a New York-based licensing company that owns and manages the Ali brand, after paying an undisclosed amount for Muhammad Ali’s intellectual property – photos, videos and famous slogans including “Float like a butterfly, sting like a bee” – aims to introduce the humanitarian to a new generation of Americans coming of age after his death.

In June 2016, The New York Times revealed that the ABG’s plans deals with energy drink, airlines, watch brands, financial services, hotels and possibly a Broadway show. Around 40 brands were said to already have licensed rights to the Ali brand including Adidas, H&M, Dolce & Gabbana, Under Armour.

When contacted by BuzzFeed News, a spokesperson for the ABG group, Haley Steinberg said, “The company consults closely with Ali’s family about how his brand is managed.” Steinberg offered to set up an interview with a senior marketing officer but soon after declined, saying no one was available to comment. When the news outlet inquired for the reason, she stopped replying.

BuzzFeed also reached out to Ali’s widow, Lonnie Ali through email to which she replied that she was unavailable until mid-August. While the six core principles of the Muslim legend’s life – confidence, conviction, dedication, giving, respect and spirituality  –have been highlighted as his legacy by the family, spirituality has been reflected upon the least.

Recently, the holy month of Ramazan and Eid-ul-Fitr passed without any post on Muhammad Ali’s social media feeds. During research, the news site found only one picture, posted in 2014 that referred to him as a Muslim despite him having photographed as Muslim numerous times – including popular images of him in Ahram during Hajj, one of him holding and kissing the Holy Quran, another one where he is holding a newspaper with a headline that read “Allah is the greatest” and one where he was hanging out with Malcolm X.

A Muslim professor at the University of Southern California, Sherman Jackson told BuzzFeed that “religion is an inconvenient fact for companies looking to profit by putting his image on T-shirts, hats, and posters.” Jackson, with extensive work on Islam and Black America, delivered eulogy at Muhammad Ali’s funeral in Kentucky. He said the duty to ensure that the most important part of the warrior’s legacy does not get lost due to revisionism and commercialisation. “It’s up to Muslims to really understand his legacy, to really preserve it, and to put it where it ought to be in terms of the pantheon,” Jackson added.

“A lot of young people in this age of Islamophobia are really almost starved for heroes who can inspire them to straighten their backs and hold up their heads,” the professor, said. “And nobody really personified that as keenly, as forcefully, as unapologetically, as Muhammad Ali.”

While the social media feed honours his work as an activist and humanitarian, it fails to acknowledge Ali’s citation of Islam behind most of his work including when he filed for conscientious objector status during Vietnam War, insisting it violated the teachings of the Holy Quran. For Ali, Islam served as bridge when he travelled to Iraq seeking release of 15 US hostages in 1990, and again in 2015 when he asked Iran to free then-jailed Washington Post reporter Jason Rezaian.

While boxing legend’s legacy on the international level may not be true to his life, the Muhammad Ali Centre in his hometown of Louisville, Kentucky is working to keep his spiritual journey alive by dedicating a spiritual pavilion that underlines his journey to Islam. “We don’t preach one religion over another,” said Becky Morris, a communications and marketing associate at the Ali Center. “Rivers and streams all contain the same water,” she quoted Muhammad Ali.

Turk, a signatory of Ali’s will, said the scholarship, which currently has 14 candidates in pipeline, aims to recognise how Islam was intertwined with symbolism of the boxing legend. “It’s not an insignificant or marginal aspect of the story of who Muhammad Ali was,” he said. “It was at the core of who he was, as a man and as a legend.”

The programme was endorsed by Lonnie Ali who said the scholarship represents “an extension of Muhammad Ali’s legacy” that empowers students to create a better perception of Islam.

The importance of Islam in Ali’s life can perhaps be gauged by his famous and most repeated quote: “Being a true Muslim is the most important thing in the world to me. It means more to me than being black or being American.”

This article originally appeared on the BuzzFeed.