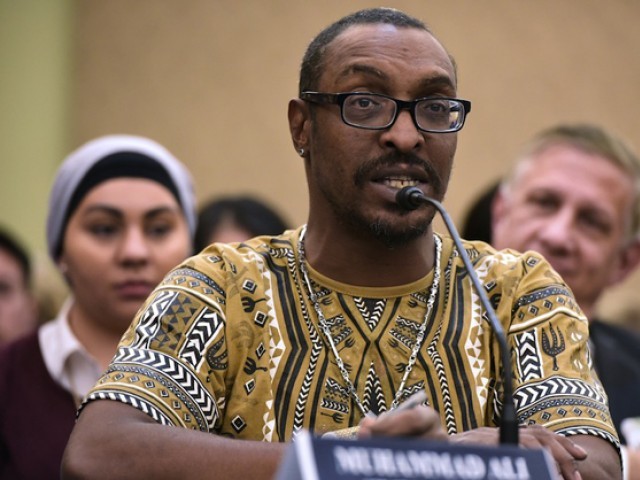 Muhammad Ali, Jr., son of boxing legend Muhammad Ali, speaks during a forum on the consequences of US President Donald Trump's immigration policies at the US Capitol in Washington, DC on March 9, 2017. PHOTO: AFP

Muhammad Ali Jr, the son and namesake of the late boxing great, was questioned about his identity at a Washington DC airport before boarding a flight on Friday, one day after he testified before lawmakers about a similar incident at another airport, a US Congresswoman said.

“To me it’s an act of retaliation, in addition to him continuing to be religiously profiled,” said Representative Debbie Wasserman Schultz, a Democrat from Florida, who was on the same flight as Ali.

Muhammad Ali Jr previously said he was detained at an airport in Florida on February  7 after arriving on a flight from Jamaica and that federal agents asked about his Muslim religion.

Ali testified about the incident on Thursday before Democratic members of the House Judiciary Committee. Wasserman Schultz said she does not believe it was a coincidence that Ali had trouble boarding a flight from Washington.

This follows moves by President Donald Trump to place US entry restrictions on travellers from several Muslim-majority countries and to tighten border security.

Bruce Anderson, a spokesman for the Transportation Security Administration, confirmed TSA officials were called to verify Ali’s identity when he was at the check-in counter.

“We sometimes have to verify the identity of passengers,” Anderson said in an email. “We work to resolve the problem as quickly as possible, which in this case took 11 minutes.”

Ali was asked to present another form of identification aside from his state-issued card, even though that form of ID is commonly sufficient for US citizens to board a domestic flight.

After Ali remembered that he had his US passport and produced that, he was allowed to board his flight to Fort Lauderdale, Florida, Wasserman Schultz said by telephone, adding that she was at the airport and heard about the incident from Ali’s attorney.

Wasserman Schultz, the former chairwoman of the Democratic National Committee, boarded the same flight as Ali going to Fort Lauderdale and posted a photo on Twitter of herself and him, both smiling as they stood in the plane.

Ali’s father Muhammad Ali, a former heavyweight champion who was widely known as “The Greatest,” died in June and his funeral was attended by former President Bill Clinton and dignitaries from around the world.