More than 21,000 people have since signed an online petiti­on demand­ing it be taken down
By AFP
Published: July 6, 2017
Tweet Email 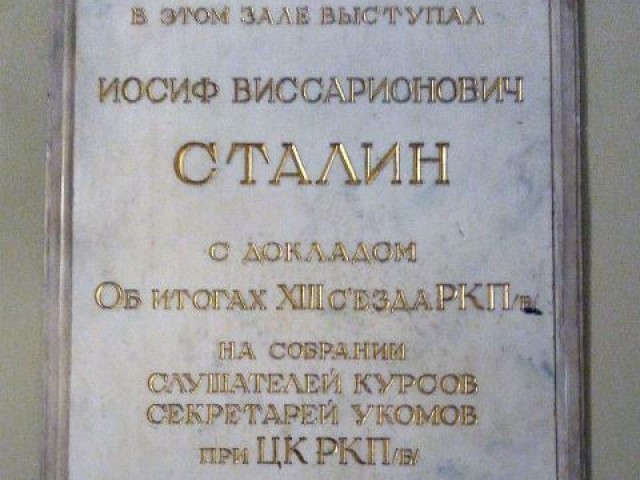 More than 21,000 people have signed an online petition calling for the plaque to be removed. PHOTO: AFP

MOSCOW: A decision to restore a memorial plaque to Soviet dictator Joseph Stalin at a state-run Moscow university has sparked outrage as another sign that officials are trying to whitewash his crimes.

The Moscow State Law University last month reinstated the Soviet-era plaque marking a speech delivered there by Stalin in 1924. It was removed in the 1960s.

More than 21,000 people have since signed an online petition on Change.org launched by a former student demanding it be taken down.

“We are deeply concerned about the rehabilitation of the Stalinist regime in Russia in general and in this case in particular,” the petition said.

The decision saw a prominent rights lawyer and professors of another college break their ties with the university in protest.

But the Kremlin’s human rights obudsman Tatyana Moskalkova has argued that the plaque helps “future lawyers remember how important it is not to slip into repression”.

“There is a similar plaque in the foreign ministry,” she was quoted as saying by Russian news agencies.

Officials at the State Law Academy did not comment when contacted by AFP.

The furore comes as critics accuse the authorities under President Vladimir Putin of minimising Stalin’s crimes.

Officials have increasingly sought to focus on Stalin’s role in winning World War II and downplaying the millions of people executed and sent to labour camps during his rule.

Stalin this month topped a Russian opinion poll as the greatest figure in its history, ahead of current Putin in second place.