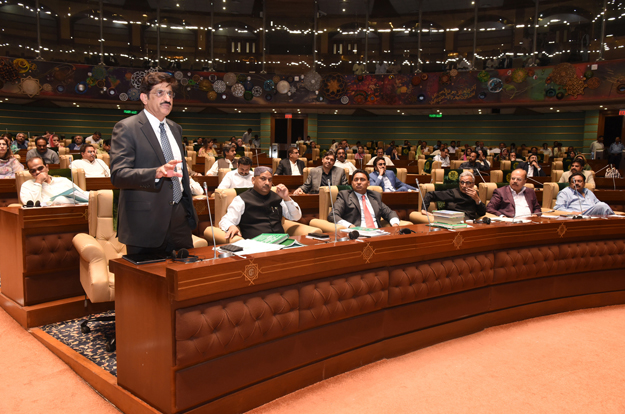 KARACHI: Amid protests from opposition parties, the Sindh government passed a law on Monday to repeal the National Accountability Ordinance, 1999.

Terming it a ‘black and draconian law’, Law Minister Ziaul Hasan Lanjar said that all proceedings, inquiries and investigations pending under the repealed ordinance shall be transferred to the Sindh Anti-Corruption Establishment. All references and legal proceedings filed or pending before accountability courts will be referred to the anti-corruption court and such courts shall proceed with the reference and legal proceedings from the stage at which they were pending, without having to recall any witnesses who were earlier presented before the accountability courts, according to the minister.

The one-day session was summoned for the sole purpose of passing this law and after it was passed, Speaker Agha Siraj Durrani prorogated the proceedings till an unspecified time. The law was passed following frequent actions and raids by National Accountability Bureau (NAB) against Pakistan Peoples Party (PPP) ministers and bureaucrats on charges of corruption.

‘Who will hold corrupt persons accountable if NAB is eliminated?’

Moving the bill, Lanjar said that the National Accountability Ordinance, 1999 was enacted after the proclamation of emergency on October 14, 1999 and was subsequently included in schedule VI of the Constitution, along with Local Government Ordinance, 2001 and Police Order, 2002. “Both the police order and local government ordinance have already been repealed. It is now high time to get rid of this law to revive the original position of the Constitution,” he said. “As per the law, corruption is a provincial subject. Corruption has nothing to do with the federal legislative list. The NAB ordinance should have been withdrawn after six months of the emergency imposed in 1999, but this never happened and the then government gave this law a constitutional cover through the 17th Amendment,” explained Lanjar, adding that the provincial government already has an independent anti-corruption administration and two parallel laws could not be imposed on the people of Sindh.

“Since the creation of Pakistan, corruption issues have been dealt with by the Anti-Corruption Establishment, but NAB was created to victimise political opponents,” he said, adding that there is no other institution or authority in the world that issues notices, registers cases or announces punishments. Speaking about the law, he said the provincial government would draft a comprehensive bill within 30 days to deal with corruption cases and strengthen the anti-corruption department.

During his speech, members of opposition parties continued their protest. Speaker Durrani repeatedly requested Leader of the Opposition Khawaja Izharul Hasan to control his party MPAs and maintain decorum in the House. “We will give you an equal chance to speak about this law. Please ask your members to listen to the law minister who is briefing the house about objectives of this law,” Durrani told Hasan.

After the law was passed, Durrani gave the floor to Advocate-General Zameer Ghumro who, being an ex-officio member, attended the session. Ghumro referred to Article 232 of the Constitution and said that the provincial assembly has the power to repeal any law. “The NAB ordinance was promulgated under the necessity of law, which [no longer] exists. The dictator, by imposing emergency in the country, brought in this ordinance. After the 18 Amendment, this House has the power to repeal the ordinance and [pass] any law [in its place],” he said. The chief minister and cabinet are also competent authorities for decisions in the province, he said, adding that unfortunately under the ordinance, NAB could take action against the CM, any lawmaker or even the speaker of the assembly, which is in contradiction to the above mentioned officials’ fundamental rights and the Constitution.

Muttahida Qaumi Movement (MQM) parliamentary leader Syed Sardar Ahmed questioned why the PPP government did not repeal the law during its tenure in the Centre. “You enjoyed powers in the federal government from 2008 to 2013 but no one talked about this law. Why have you awakened now after so much time?” he asked.

Ahmed suggested the government bring reforms in the NAB ordinance rather than repeal it. “The NAB chairperson is appointed on the recommendation of the prime minister and opposition leader in the National Assembly who belongs to your party. Why are you making hue and cry [over this]?” he questioned, adding that the anti-corruption establishment has been lying idle, while corruption is increasing with each passing day. “From Karachi to Kashmore, no government office is spared from corruption,” he claimed.

The situation deteriorated when the speaker asked Pakistan Muslim League – Functional (PML-F) parliamentary leader Nand Kumar to make a speech. Kumar suggested giving a chance to other members to speak on the bill, but the speaker refused. “We have limited time. Only the parliamentary leaders of various parties can speak on this law. I can put the bill in the House for the vote if you are unwilling to speak about it,” Durrani said.
This irked opposition members who wanted a chance to discuss the law. All the members belonging to MQM, Pakistan Tehreek-e-Insaf, PML-Nawaz and PML-F stood up at their seats and protested against the law. Despite their protests, however, the speaker gave the floor to the law minister to read the bill and get it passed.

80 aspirants to participate in She Loves Tech Pakistan