Chines­e compan­ies and their partne­rs are expect­ed to spend around $15 billio­n over the next 15 years
By Reuters
Published: May 3, 2017
Tweet Email 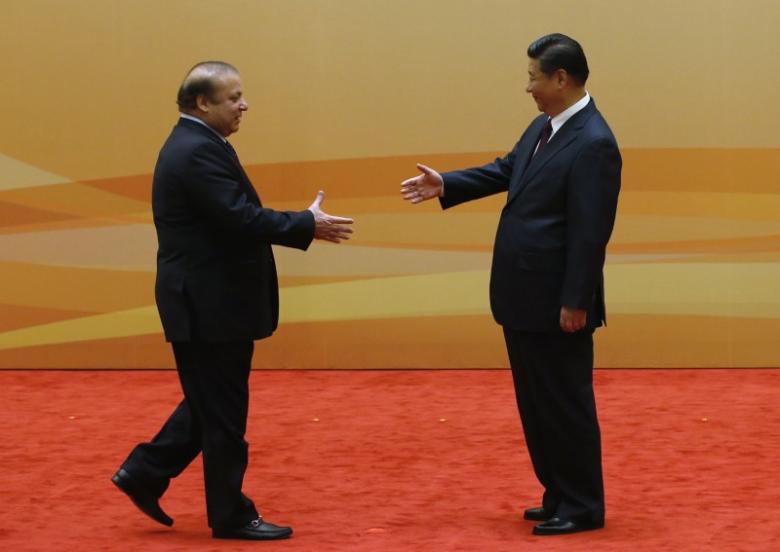 Chinese companies and their partners are expected to spend around $15 billion over the next 15 years. PHOTO: REUTERS

ISLAMABAD: With much of the world pouring investments into renewable and clean energy, Pakistan is drawing criticism for welcoming Chinese investment in coal-fired power plants as part of a plan to boost urgently needed generating capacity.

Officials at the Water and Power Ministry have said Chinese companies and their partners are expected to spend around $15 billion over the next 15 years to build close to a dozen coal power plants of varying sizes around the country.

Mohammed Younus Dagha, the former federal secretary for water and power, who became commerce secretary at the end of March, emphasised that the coal plants are part of a larger plan.

That is the $54 billion China Pakistan Economic Corridor (CPEC), which includes spending of about $33 billion on a total of 19 energy projects, including coal-fired and renewable power plants, transmission lines, and other infrastructure.

“Hefty investment under the CPEC project has held out hopes of significantly spiking domestic power generation (by) around 6,000 megawatts by the end of 2018,” Dagha said.

Combined, the projects will eventually generate 16,000 megawatts (MW) of electricity, which the government says is urgently needed. About three-quarters of the newly generated power will come from coal-powered plants, and the government insists that these will be fitted with the latest technology to reduce pollution and climate-changing emissions.

But environmentalists and energy experts have lambasted the plans for coal-fired plants as a waste of money that will badly damage the environment and tarnish Pakistan’s image as one of the lowest carbon emitters. “Such plants would only accelerate the rising trajectory of the country’s carbon emissions, (accelerating) environmental degradation that costs billions of rupees to the national exchequer annually,” said Syed Jawad Hussain Shahzad, an energy expert at the Comsats Institute of Information Technology in Islamabad.

Pakistan has long needed more power than it can produce, with the energy deficit currently around 4,000MW. According to the International Energy Agency (IEA), average energy demand in the country is around 19,000MW, against the generation of around 15,000MW.

Demand soars beyond 20,000MW during peak summer months of May to July, when air conditioning systems place an extra burden on the national power grid, often causing power cuts.

The IEA forecasts that total electricity demand will rise to more than 49,000MW by 2025 as the country’s population increases.

Only 67 per cent of Pakistan’s approximately 190 million people have access to electricity, according to the World Bank.

To improve access and keep pace with economic growth, the country needs to invest between 3.7 per cent and 5.5 per cent of its GDP each year in increasing electrical production, the bank said in a report on South Asian infrastructure published in 2013.

Part of the motivation for building coal-powered plants lies in the availability of the fuel within Pakistan.

The federal minister for planning, development and reform, Ahsan Iqbal, said that the sprawling desert region of Tharparkar in southern Pakistan, home to some of the world’s largest coal reserves, cannot be left unexploited. “Pakistan must tap these unutilised vast underground reserves of 175 billion tonnes of coal, adequate to meet the country’s energy needs for several decades, for powering the country’s economic wheel, creating new jobs, and fighting spiking unemployment and poverty,” Iqbal said.

Pakistan currently ranks 135th in the list of global emitters of carbon on a per capita basis, accounting for less than 1 per cent of total global carbon emissions, according to World Bank data.

According to the report submitted by Pakistan to the UN Framework Convention on Climate Change last year, the country’s emissions in 2015 stood at 405 metric tonnes of carbon dioxide equivalent. However, emissions are increasing at a rate of 3.9 per cent annually.

Iqbal touts the green credentials of the planned coal power plants, which will use the latest “supercritical” emission-reducing technology that is used in China itself and elsewhere. “The latest coal power plants (will) be as clean as gas-based power generation,” Iqbal insisted. “(They) require less coal per megawatt-hour, leading to lower emissions, including carbon dioxide and mercury, higher efficiency and lower fuel costs per megawatt.”

“No sane person would want electricity from dirty energy sources, even though supercritical technology is used,” said Malik Amin Aslam, a former state minister for the environment who serves as global vice-president of the International Union for Conservation of Nature.

“These plants, not being completely free of carbon emissions, will still harm the public health and the country’s environment,” he said.

Pakistan is considered one of the countries, most vulnerable to the impacts of climate change, from worsening floods and scalding summer temperatures to erratic rainfall that can kill crops.

China’s ambassador to Pakistan, Sun Weidong, stressed that coal power is only part of the projects China is supporting through its investment in CPEC. “We are equally helping Pakistan to bring more and more renewable energy sources into its energy mix by tapping its massive wind and solar energy potential,” Sun said.

Planned renewable energy projects under CPEC include a solar park, four wind farms and three hydro plants that together would generate around 3,900 MW, at a cost of about $7.5 billion

According to the Pakistan Alternative Energy Development Board, Pakistan has the potential to generate annually 2.9 million MW of clean energy from solar, 340,000MW from wind and 100,000MW from hydropower.

“We really fail to fathom the government’s inclination toward environmentally damaging coal power plants while the country can generate millions of megawatts of solar, wind and hydroelectricity,” said Mir Ahmad Shah, executive secretary of the Pakistan Renewable and Alternative Energy Association.

“Even countries like Saudi Arabia – rich in oil resources – are gradually switching over to clean energy sources,” Shah said.