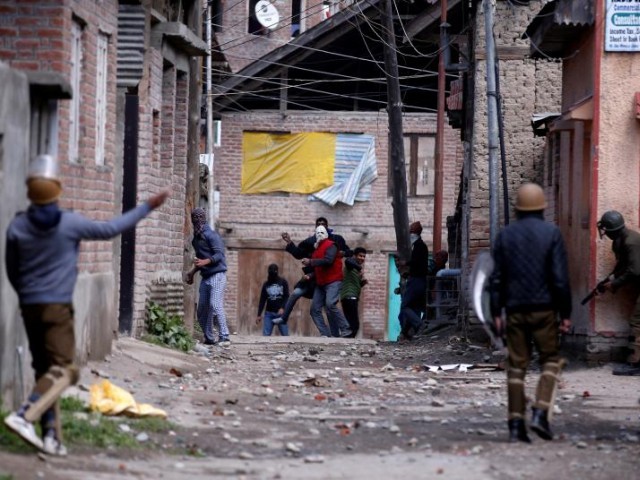 SRINAGAR / ISLAMABAD: Six civilians were killed in Indian Occupied Kashmir on Sunday when police opened fire at protesters who stormed polling stations during a by-election for a parliamentary seat, a top officer said.

“It was not a good day for all of us. Six civilians were killed and 70 were wounded,” Shantmanu, who uses only one name, told reporters. Many were grievously injured with bullets fired by police and paramilitary troops, hospital sources in Srinagar said.

The electoral officer said more than 100 government personnel, including police and paramilitary officers were also injured in the clashes.

In the Charare-e-Sharif area of Budgam two people were killed when India’s paramilitary Border Security Force fired at protesters, he said. Another person was killed in the Beerwah area of the same district when paramilitary police opened fire at a stone-throwing crowd. Three more were killed in the day-long clashes, with two of them succumbing to multiple pellet injuries from the shotguns which Indian paramilitary forces use in IOK for crowd control.

Polling had to be halted in more than dozen places amid a call by Kashmiri leaders opposed to Indian rule to boycott the by-election. Only 6.5% of voters turned out to cast their ballot, Shantmanu said, 26% less than in the last elections held in 2014 and the lowest ever participation recorded in any election in the disputed territory.

At least 70 polling stations were shut due to the violence. “There were more than 200 incidents of violence…which included stone-pelting, petrol bomb attacks, setting ablaze of a polling station,” Shantmanu told reporters.

The by-election in Srinagar is being held to fill a vacant seat in the Lok Sabha, India’s lower house of parliament. A second by-election in the state for a separate Lok Sabha seat is set to take place on April 12 in Anantnag. The results of both polls are expected to be announced on April 15.

Former state chief minister Farooq Abdullah, who is contesting the Srinagar seat, slammed the government for its failure to maintain law and order. “Elections should have been peaceful. This government has failed in giving a peaceful atmosphere for people to come and vote,” he told reporters.

Ahead of the polling, authorities suspended internet services across the Kashmir Valley for fear of widespread protests. Police had also detained hundreds of young people and separatist activists in the run-up to the poll, sources told AFP.

Ahead of Sunday’s polling, the Indian government had sent in 20,000 paramilitaries to reinforce the around 500,000 Indian soldiers already deployed in IOK.

There has been a spate of protests since the killing of popular rebel leader Burhan Wani by Indian security forces last July. The violence has killed 84 civilians and wounded more than 12,000 civilians and security force personnel. Police and army officials say dozens of local youths have joined the rebel ranks since then. At least 29 armed militants, mostly locals, have died fighting government forces this year.

“Eight youths, including a 12th grade student, were brutally killed by Indian occupation forces, who opened fire on peaceful demonstrators protesting against the sham Indian parliamentary elections in Bagdam, Srinagar and Gandarbal districts,” Sartaj said in a statement.

“The abysmally low voter turnout of below 6%, the lowest in 30 years, is a tangible indication that the Hurriyat leadership and the people of IOK have categorically rejected the sham elections, which cannot be an alternative to the right to self-determination promised to them under numerous UN Security Council resolutions.”

“We call upon the international community to urge India to put an immediate end to the ongoing bloodshed of innocent Kashmiris and behave as a responsible member of the international community by honouring its commitments to hold a transparent, free and fair plebiscite under the auspices of the UN in accordance with Security Council resolutions to ascertain the wishes of the Kashmiri people,” he said.

“India continues to deny fundamental human rights to the people of IoK, with scant respect for life or person.    The continuing Indian brutalities and unprecedented violence by Indian occupation forces in IoK since July 2016 are crimes against humanity. Indian barbarities are a cause of deep anguish and pain for Kashmiris and a slur on respect for human rights globally,” he added.

“Despite Indian state terrorism and repression the steadfast resolve displayed by the Kashmiris in IoK sends a clear message to India that they remain undeterred in their goal for realisation of the right to self determination.”

Seperately, Foreign Office spokesperson Nafees Zakaria tweeted that Pakistan will continue to extend diplomatic, moral and political support to Kashmiris in their indigenous movement for self-determination.

“Indian genocide in IOK is condemnable. Perpetrators must be brought to justice… UN should take note, stop Kashmiris’ bloodshed in IOK by Indian occupation forces,” he added.