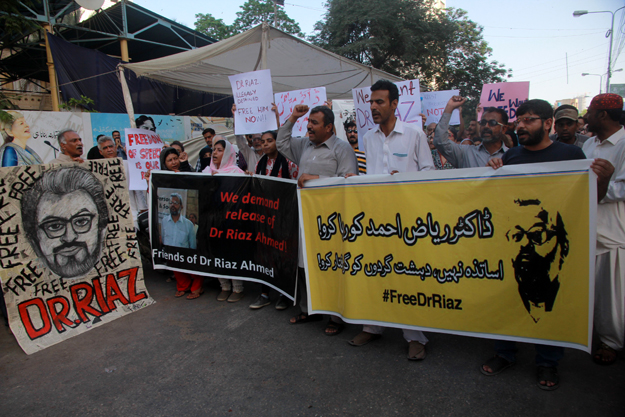 KARACHI: A judicial magistrate remanded on Sunday Karachi University (KU) professor Dr Riaz Ahmed to jail in a case pertaining to the possession of an illicit weapon.

The case was registered at the Artillery Maidan police station on the complaint of a Rangers officer who contended that during the search of Dr Ahmed’s car he found an unlicensed loaded Stoeger Cougar 8000F pistol.

The paramilitary force officer, SI Shahid Pervez Khan, maintained that the detained professor was also involved in advocating on Facebook for the release of ‘blasphemous’ bloggers reportedly picked up by law enforcement agencies recently.

The three of them were heading to the press club to address a press conference for the release of Dr Hasan Zafar Arif, a teacher and leader of Muttahida Qaumi Movement – London currently incarcerated in a number of cases.

Dr Riaz was presented before a District South judicial magistrate performing special duty on holiday, said Artillery Maidan’s Head Muharrar Shahzad. The judge sent the suspect to jail and directed the police to submit an investigation report on the next hearing, he added.

The Karachi University Teachers Society (KUTS) also condemned the arrest and demanded that the detained professor be released immediately. “Teachers are being implicated in fake cases. This cannot be tolerated at all,” a statement read. “If Dr Riaz is not released immediately then the teacher’s fraternity will resort to country-wide protests.”

Civil society to go to court in support of AD Khawaja