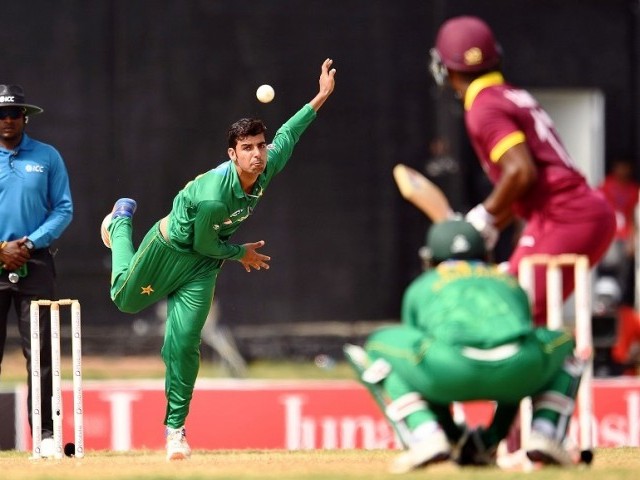 MULTITALENTED: Jones believes Shadab’s fielding is better than any current Pakistani player and his bowling ability combined with his hitting prowess make him a complete package for the national team. PHOTO: AFP

Pakistan leg-spinner Shadab Khan has become the darling of cricket lovers since his debut performances against the West Indies in the ongoing T20I series and Islamabad United coach Dean Jones — the team for which the 18-year-old’s talent came to the fore in the second edition of the Pakistan Super League (PSL) — is also all-praise for the youngster.

Shadab claimed a match-winning three-for and a four-for in his first two T20Is for the tourists against the Caribbean giants. Meanwhile, in the third T20I, which Pakistan lost by seven wickets, he bagged figures of 1-38 in 3.5 overs.

And Jones, when asked about the teenager’s persona off the field, told PakPassion: “I wouldn’t call him an introvert but he is a little shy and careful about the people around him. The main thing is that when he gets the ball in his hand, he knows exactly what he has to do. Now for a kid who hasn’t played that much cricket yet, it is amazing to see how he just seems to know where to bowl and has the confidence to back it up. I have no idea where that quality comes from but the guy is a genius.”

Shadab had represented Pakistan with the A team, however, his moment to shine came when he was drafted in the squad by Islamabad as a reserve player for PSL2.

Jones, when asked to recall Shadab’s first impression on him, said the “boy” came off as “pure gold”.

“The very first time [Islamabad United director of cricket] Wasim Akram and I saw Shadab in the nets, we looked at each other and said this boy is pure gold,” reminisced Jones. “We also had former Pakistan off-spinner Tauseef Ahmed to help him out, which worked well.”

Shadab also showcased his batting skills in the PSL2 with 42 off just 24 against Lahore Qalandars during group matches and Jones believes the 18-year-old is one of the few complete packages discovered by Pakistan because he can field well too.

“We admire and talk about his bowling, but it’s worth mentioning that he is probably the best fielder in the Pakistan side at the moment,” said Jones. “On top of that, he can bat too and some of those sixes he hit over cover in Dubai during the PSL were just breath-taking. These are the skills which make him the complete package.”

Shadab’s claim to fame is the googly which he bowls with utter perfection and control and that too more often than expected to bamboozle the batsmen, however, the Australian legend revealed that it was not effective until the Islamabad United team management worked on the leggie’s action and run-up.

“He did come in with a few technical difficulties with his action and run-up and we helped him with it during the PSL,” said Jones. “We asked him to adjust his bowling and told him that his landing zones needed to be different and better so that he could get batsmen out with his leg-breaks instead of the wrong’uns which he was relying on a lot more before his stint at the PSL.”

So what were the faults in his bowling techniques? “He now bowls on the off and middle-stump line and the batsmen aren’t picking him at all. Initially, he was bowling wide off the crease, almost six inches to a foot wide, to try and get batsmen out using his wrong’un all the time. We had to get him to straighten his run-up a bit.”

And how did he improve that? “We had to get him to train on special ‘dance’ steps to accustom himself to a straightened run-up. These were dance steps marked on the carpet of his hotel room so that he could practice before going to sleep and within a week or so, he was all set with this revised run-up and ready to go.”

After such a tremendous debut, the talks of trying Shadab in the Test squad have already started making it to the discussion circles and Jones has said yes to the idea.

“That would be fantastic news if he is picked for the Test squad and why not?” asked Jones. “Let’s get him in there, he’s good enough. Look it’s possible he may not do too well in there initially but on the other hand, he may be very successful.”