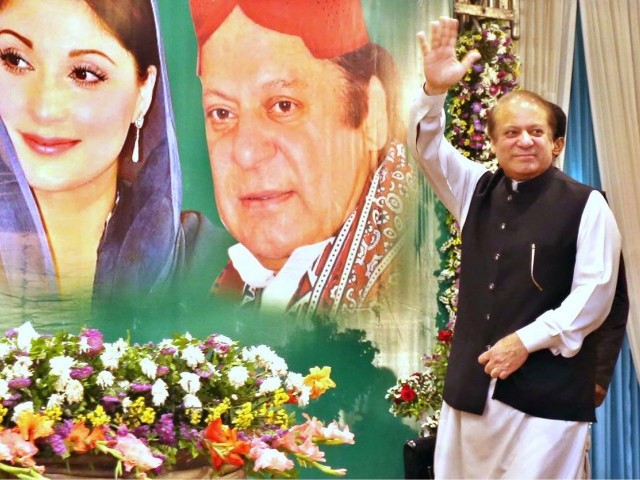 HYDERABAD: Loading the political dice against the PPP on its home turf, Prime Minister Nawaz Sharif on Monday announced a slew of projects for Sindh’s second largest city as he asked people to ask the previous rulers what they had done for the country, except for ‘pushing it into darkness’.

“Ask the previous rulers for their apathy towards projects like extension of the motorway from Lahore to Karachi and launching of more power projects to meet growing electricity needs of the country,” Sharif said while addressing a PML-N workers convention in Hyderabad.

This was Sharif’s third consecutive visit to Sindh, PPP’s political powerhouse, within a month. Earlier, he had addressed a public rally in Thatta on March 9 followed by his visit to Karachi, where he had participated in a function organised by the Hindu community on March 14.

“Before casting vote [in the next general elections] people should question past performance of the ruling party [in Sindh],” he suggested. “This is a very valid question. After this, you must decide who deserves your vote,” he added.

He painted a bleak picture of the state of public facilities in Sindh, describing supply of unclean drinking water, dilapidated roads, garbage heaps, poor standards of education and health services as glaring examples of bad governance.

For PM, offence is the best defence

Sharif mentioned the development projects in energy, communication and other sectors which he has initiated after the PML-N’s victory in the 2013 elections. He asked the people to question former president Pervez Musharraf and the PPP why such projects had not been undertaken during their regimes.

“The motorway from Islamabad to Lahore was completed in 1999. But after that not a single inch of motorway was extended to the other cities,” he said, adding that he had planned in 1991 to lay a network of the motorways from Peshawar to Karachi through Punjab.

However, he said, his government took up the unfinished task after coming to power and motorways were now being built throughout the country.  “Once the network of motorways is developed, one will be able to easily travel from Karachi to Peshawar in a day,” he said.

The prime minister also claimed that the country would soon get rid of unemployment, poverty and illiteracy, and medical treatment facilities would be made affordably available for everyone owing to massive development going on under the China-Pakistan Economic Corridor (CPEC).

“Duration of load-shedding has been remarkably decreased and will be eliminated next year,” he said. Sharif said the country’s internal demographics were changing owing to development activities and road infrastructure being developed from Gwadar to China border.

“Pakistan is changing. A new Pakistan is in the making,” he said, adding that the government had broken the back of terrorists and peace was returning in Karachi with business activity reviving and labourers working in a peaceful atmosphere.

He said Hyderabad had also been purged of terrorists, who were now on the run.

Sharif reiterated his resolve to eliminate the menace of terrorism. He said peace was also restoring in Balochistan where a vast network of roads was being developed under CPEC.

“Peace is also returning to Karachi as investors are back to hold their business meetings there which had earlier been switched to Dubai due to the law and order situation here,” he added.

Sharif, however, obliquely took jibes at the PPP-led Sindh government as he made a reference to the piles of garbage in Sindh’s provincial capital. “Today, heaps of garbage and pollution feature Karachi,” he said.

He said Hyderabad would also benefit from that development as the city had earlier been deprived of clean drinking water with its road infrastructure in a shambles. He said economic zones would also be developed throughout the country, besides establishing colleges and universities.

While the prime minister remained guarded in his criticism of the PPP’s Sindh government and kept a lid on the political strategy, Railways Minister Saad Rafique, who was accompanying him, put the PML-N’s cards on the table.

Rafique defended Sharif’s repeated visits to Sindh after nearly four years in the power. “We are criticised why we didn’t come to Sindh earlier. We didn’t come because you [PPP] would have found an excuse that we [PML-N] are not letting you work and deliver.”

Fulfilling a decades old demand of the people of Hyderabad, the prime minister announced establishment of a federal university in the city and a grant of Rs1 billion for the project. “I want to congratulate parents and students,” Sharif said.

Hyderabad, whose population is estimated to be around three million, has only one state-run university and that too in the agriculture sector. The premier also announced Rs500 million funds for the Hyderabad Municipal Corporation.

He also promised construction of a new international airport and a metro bus service, supply of gas and electricity to hundreds of villages and increase in the wheat procurement from Sindh to 100,000 tonne.

He assured the residents of Hyderabad that survey teams would soon visit the city for data collection and then, he, along with his daughter Maryam Nawaz, would come there to hand over the PM Healthcare Insurance Scheme cards to the needy.

PM to be presented ‘golden crown’

A local trader of Hyderabad, Rehmatullah Saand, had brought the gift for the PM. However, it was not accepted.

The security team turned down the request, Saand told The Express Tribune.