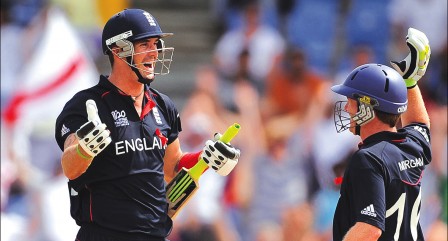 BRIDGETOWN: Australia are flying high after their stunning win over defending champions Pakistan and will face an in-form England when the two Ashes rivals clash in the final of the World Twenty20 at the Kensington Oval in Bridgetown today.

Australia go into the match after chasing down a seemingly improbable 191 against Pakistan in the semi-finals and after having been unbeaten throughout the tournament. But Michael Clarke’s men will be up against an England who have been equally unbeaten since the Super Eight stage and have played some outstanding cricket.

England, who were hardly seen as title contenders before the start of the tournament, have been a revelation with an array of attacking batsmen and bowling all-rounders. But this being their first major championship final in six years, England would be as keen as Australia to take the title back home. But to achieve that, they will have to play their best cricket yet.

The Kensington Oval pitch has suited Australia’s fast bowlers, with the trio of Dirk Nannes, Shaun Tait and Mitchell Johnson not just quicker than their England counterparts, but quicker than any attack England’s batsmen have faced so far in this tournament. However, Stuart Broad, Ryan Sidebottom and Tim Bresnan are more than mere ‘pie-throwers’, although they would love to be underestimated by Australia.

Australia captain Michael Clarke wasted little time in upping the pressure on England’s Kevin Pietersen who has led the way for England with 201 runs at an average of 67, including match-winning fifties in the Super Eight against Pakistan and his native South Africa. Jet-lag does not seem to figure in the equation as his top-scoring effort in England’s sevenwicket semi-final trouncing of Sri Lanka came after he had made an 8,000-mile round trip to London to attend the birth of his first child. “Pietersen coming back into form plays a huge part,” said Clarke “He’s a wonderful player in all three forms of the game. If we can get him out early it will hold us in good stead.”

England, like Australia, have until now struggled to make an impact in Twenty20. In part this is because it is only recently that the world’s two oldest cricket cultures have taken the ‘upstart’ format seriously. But while England have yet to have their batting depth truly tested at this event, the same cannot be said of Australia. Clarke, meanwhile, also has his eyes firmly set on the elusive cup. “We’ve worked hard over the last 12 months to win the one cup that we haven’t. The boys are keen that we achieve what we had set out for.

So we will come and play our best cricket.” Australia, who lifted the last of their three successive World Cup trophies in Barbados three years ago, know all about playing in showpiece matches. England beat Australia by 100 runs when they first met in a Twenty20 international, in Southampton in 2005. Few expect a repeat today but in the fast-paced world of Twenty20, predictions can be over in an over.