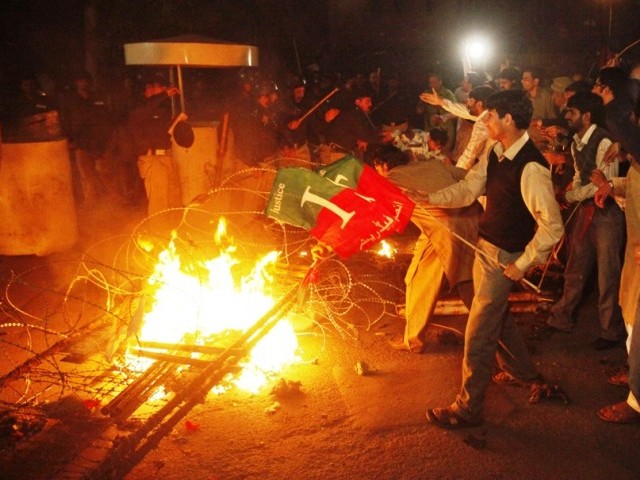 Supporters of the Pakistan's religious and political parties shout slogans as they take part in a protest against the release of CIA contractor Raymond Davis outside the U.S consulate in Lahore March 16, 2011. PHOTO: REUTERS

The fear of a backlash by orthodox forces always seems to be greater than the actual event. There was apprehension of large-scale protests after Pakistan opted to support the US in the aftermath of 9/11 2001; nothing happened beyond a few days of violent street rallies. Similarly, the release of Raymond Davis, following a settlement based on the handing over of blood money, has so far resulted in only a few sporadic demonstrations and some vitriolic comments from the usual gang of suspects (read: Self-righteous TV show hosts).

There is irony in the fact that the Jamaat-i-Islami, whose members attempted to break into the US Consulate in Lahore following the CIA contractor’s release, should have to face the reality that he was let-off under the qisas and diyat laws, proposed by the late General Ziaul Haq, a key mentor for the party. The religious parties and the right wing elements should really not be objecting at all — given their support for ‘Islamic’ laws and their vehement disapproval of all suggestions that, in at least some cases, reform is urgently needed to prevent misuse (as in the case of honour killings) of the legislation. Perhaps a realisation that they have been beaten at their own game explains their response so far. As for the public’s reaction, other than pockets of anger, as reported by this newspaper, there has not been a mass outpouring of public rage.

Of course, this not to say that people are not feeling disappointed and frustrated by the quick unfolding of the whole affair, especially since the fate of the third man’s family and what happens to the quest for finding his killer is left unresolved. In all of this, perhaps, it is difficult to ignore the fact that the media, or significant sections of it certainly, willingly or unknowingly, played into the hands of those who think themselves to be keepers of the nation’s sovereignty and this perhaps led many people to think that releasing Davis would be tantamount to selling our national honour for a few dollars. If anything, it can be said that for a change, all centres of power — the federal and the Punjab governments  and the military — were all on the same page on this issue.