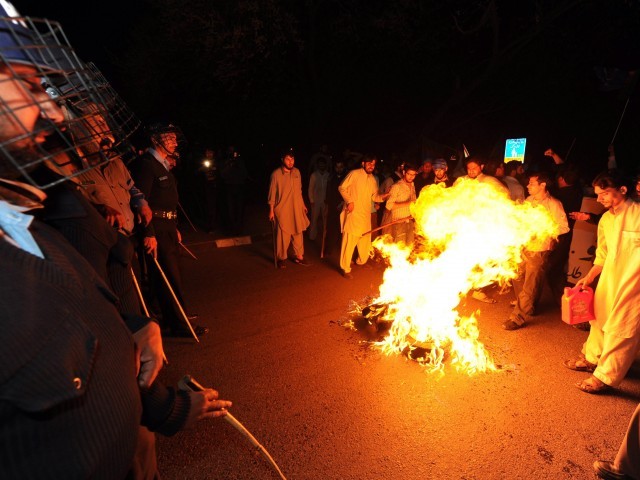 Activists torch tyres during a protest against the release of CIA contractor Raymond Davis near the US embassy in Islamabad on March 16, 2011. PHOTO: AFP

As news of Raymond Davis’ release spread, protests broke out in most major cities throughout the country, turning violent in the case of Lahore.

A protest led by the Jamaat-e-Islami (JI) and the Pakistan Tehreek-e-Insaf (PTI) in Lahore focused its attention on the US Consulate in the city, and soon became the scene of a battle between highly agitated protesters and the police, who tried to prevent the protesters from forcing their way into the consulate.

The protesters pelted the police with stones and Molotov cocktails in clashes that lasted for hours and left 15 protesters and four policemen injured. Two police vans and three cars were damaged by the demonstrators.

The JI also held a protest in Karachi, in front of the  Karachi Press Club, which attracted a relatively small crowd. None of the protests in Karachi were reported to be violent, however. The JI is planning to launch a rally in protest against Davis’ release in Karachi on Friday.

Additional protests were reported in Peshawar and Toba Tek Singh.

Political reaction against the release was relatively muted. While the JI and PTI were very vocal in their opposition to the release, mainstream political parties largely chose to remain silent. The Muttahida Quami Movement (MQM) could not be reached for comment. There was no official word from the Pakistan Muslim League, either the Nawaz faction or the Quaid faction.

The Pakistan Peoples Party (PPP) largely presented itself as being a bystander in the face of a decision by the family to accept blood money. However, not all PPP leaders agreed with this view.

Former foreign minister Shah Mahmood Qureshi, while not questioning the right of the victims’ families to accept a settlement offer, questioned whether or not they had been pressured into doing so and asked them to come forward and “take the nation into confidence.”

He also said that the out-of-court settlement proves that US claims about Davis’ diplomatic immunity were false.

None of the protests, however, indicated any opposition to the Qisas and Diyat Act of 1997, under which Davis was permitted to seek a settlement.