The release of Raymond Davis

The release of Raymond Davis

The last seven weeks were fraugh­t with tensio­n but it is finall­y time to put that behind us.
By Editorial
Published: March 17, 2011
Tweet Email 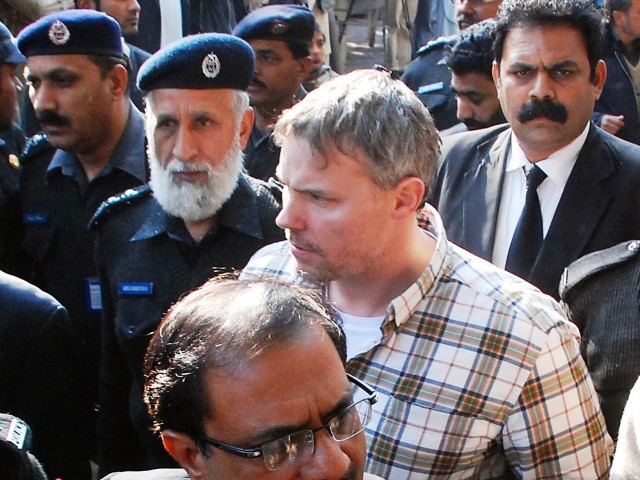 The mechanism or system under which agents similar to Raymond Davis operate may need to be re-examined. PHOTO: AFP/FILE

That Raymond Davis would eventually be released was inevitable. You don’t bite the hand that feeds you and Pakistan, unfortunately, has been feeding from the American trough for far too long. In the end, all parties involved were able to sort out the tragic incident in as satisfactory a manner as was possible under the circumstances. Davis’s release ultimately was secured in a relatively above-the-board manner with the families of his victims being paid diyat or ‘blood money’. Of course, this only happened after weeks of negotiations between the US and Pakistan governments and no doubt the families were pressurised to accept the blood money, but that Davis was freed in accordance with the principles of Islamic law should dampen the outrage of the religious parties and their supporters on the political right and in sections of the media (though evidence of that was scarce till the time this was being written on the evening following his release). The release was announced by the Punjab law minister who said that the provincial government had nothing to do with this, although the editor of an English-language weekly tweeted the same evening that the provincial chief minister had in fact played a role in it.

Even if diyat had not been paid, there are two cases to be made that show why releasing Davis was the correct and sensible thing to do. One is legalistic and the other is practical. If, as the US claimed and seems to be borne out by the evidence, Davis held a diplomatic passport, then he should have diplomatic immunity and that can be lifted only by the country of the individual and not the host nation. No matter how passionate the religious parties may have been about trying and convicting Davis, there is no getting past the fact that we are signatories to the Vienna Convention on Diplomatic Relations and thus have to abide by its terms. The only issue was that a Pakistani law required that all diplomats who have claim to such immunity be given a certificate issued by the Foreign Office, which was apparently not done with Davis. The Americans were insistent however that Davis qualified for immunity and hence should have been released and sent back to the US without delay. In all fairness, the murky nature of Davis’s diplomatic status has to be shared equally by Pakistan as well as America. It is incumbent on the Foreign Office to explain in writing the status of all foreign embassy staff. They conspicuously failed to do that. The US, meanwhile, in the days after the Davis incident, kept changing and clarifying their story, initially saying that he was with the US consulate in Lahore and then saying he was with the embassy in Islamabad. This suggested, at least to ordinary Pakistanis already driven by rage and resentment against his actions, that perhaps there was something that America was hiding.

That said, it is worth pointing out that given Pakistan’s dependence on the US, in particular for military aid, it was only a matter of time that Davis would have been released. Of course, this is not to deny the fact that America also needs Pakistan in the fight against terrorism and for maintaining peace and stability in Afghanistan and in South Asia in general, but it should be accepted that the balance of relations is tilted quite heavily in America’s favour. Had this incident happened between, say, China and America or even India and America, the result may have been different. We have said it before in this space, and will reiterate, that unless Pakistanis, especially the business and traders class, are prepared to pay their due share in taxes they cannot really complain about issues like loss of sovereignty a la Raymond Davis. Our leverage with the US is practically non-existent precisely because we are heavily reliant on it for financial assistance, military aid and even for aid from the IMF, given that Washington exercises massive influence over its lending priorities. Unfortunately, facts, reason and practical thinking are not really the strong points of our reactionaries and sections of the media who obfuscated the issue no end – and may well continue to do so. It may well be that we see protests and demonstrations against Mr Davis’s release in the days ahead, despite the fact that he was freed in accordance with the qisas and diyat law.

Although the saga may now be over, there are plenty of lessons to be learned for both Pakistan and the US. Until cooler heads prevailed, it looked like the alliance between the two countries may have been affected by the actions of one man. To prevent a repeat occurrence, the overall mechanism or system under which agents similar to Raymond Davis operate inside Pakistan may need to be re-examined and perhaps the standard operating procedure overhauled so that such an incident does not happen again. Of course, even here, it is worth reminding that usually such deployments are done with the full knowledge of the relevant ministry and intelligence agencies of the host country and it would be fair to assume that this happened in Mr Davis’s case.

As for the two governments, they need to put this behind them and realise that there is far more to gain from continuing with their at-times fractious relationship. In this regard, a recent statement by a major-general in charge of forces in North Waziristan that US drone strikes kill mostly terrorists is perhaps a pointer. It is also imperative that this case not be allowed to affect intelligence-sharing activities between the intelligence agencies of the two countries. There have been numerous reports of frictions between the two agencies over Raymond Davis. Since Mr Davis could not have been freed without the approval, tacit of otherwise, of the real force in charge of such matters in this country, it can be said that now relations should return to normality. The US may be miffed at how all this played out but they still need our cooperation in the fight against militancy as much as ever. The last seven weeks were fraught with tension but it is finally time to put that behind us.