You love butter but its intake actually doubles diabetes risk

Here are some stunning shots from the collection of winning images

PHOTO: GREG LECOEUR/ UPY 2017
The international Underwater Photographer of the Year competition has revealed its collection of winning entries for 2017. A portrait of an octopus in the lagoon of the island of Mayotte became the winning shot from among 4,500 entries from 67 different countries.

Categories included Wide angle, Macro, Wrecks, Behaviour, Up & coming and Compact, for which prizes and commendations were awarded.

Here are some stunning shots from the collection of winning images. 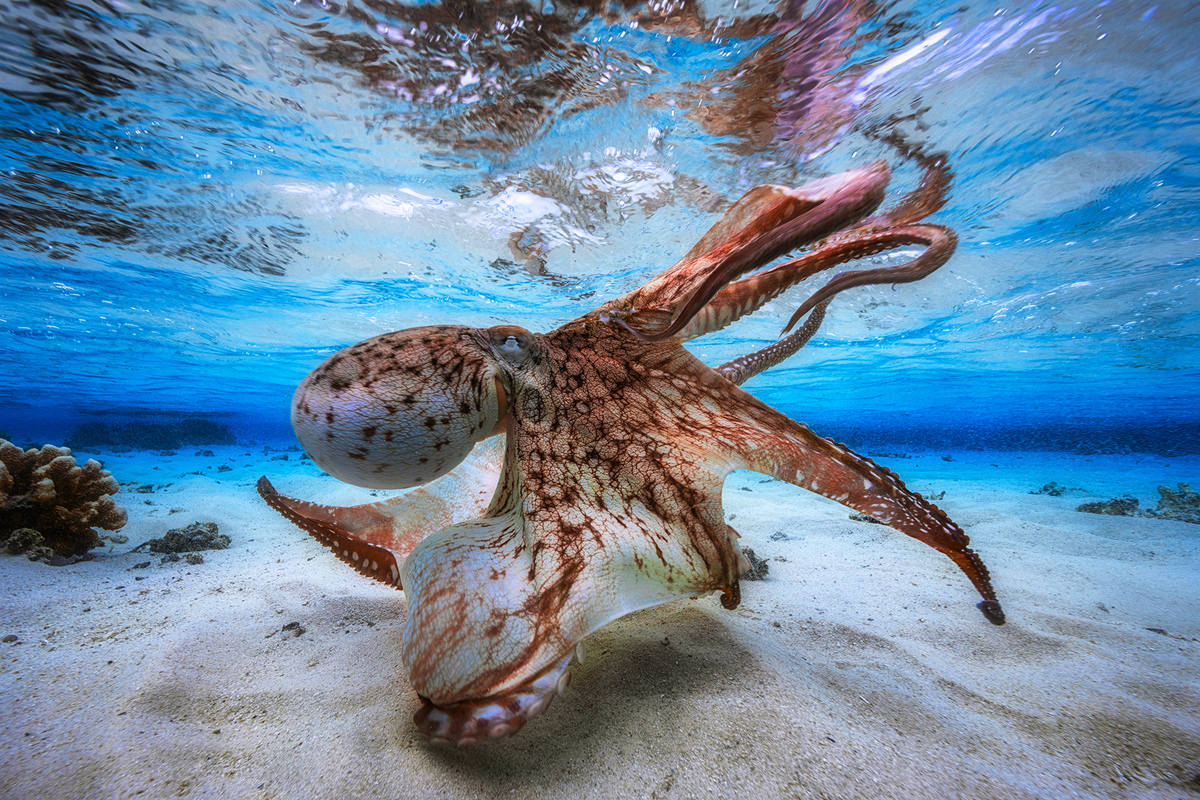 Grand prize: Dancing Octopus. In the lagoon of Mayotte, during spring low tides, there is very little water on the flats. Only 30 cm in fact. That's when I took this picture. I had to get as close as possible to the dome to create this effect. The 14 mm is an ultra wide angle lens with very good close focus which gives this effect of great size. The octopus appears larger, and the height of water also. Photographed off Mayotte Island on May 7, 2016. 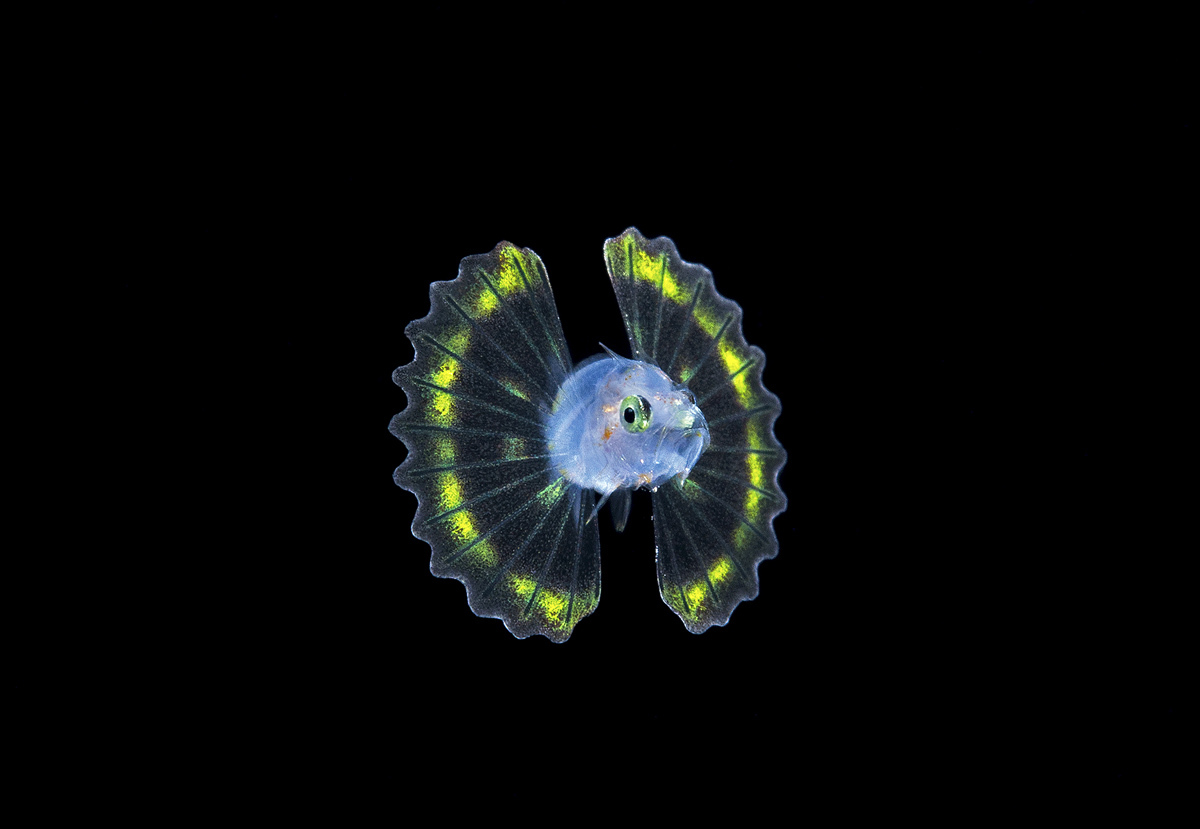 Larval Lionfish. This image was taken on a black water drift dive in Palm Beach, Florida to look for alien looking pelagic animals, plankton and the larval stages of many creatures that drift out in the open ocean in their early stages of development. Many of the animals seen during black water dives are very small and can move quickly when illuminated by powerful dive lights, so getting a nice image is, not only challenging but, very rewarding as well. On one particular dive I was very fortunate to come across this rare tiny Lionfish in its early larval stage and was fortunate to get a photograph of it just as it flared it's beautiful fins for the camera. 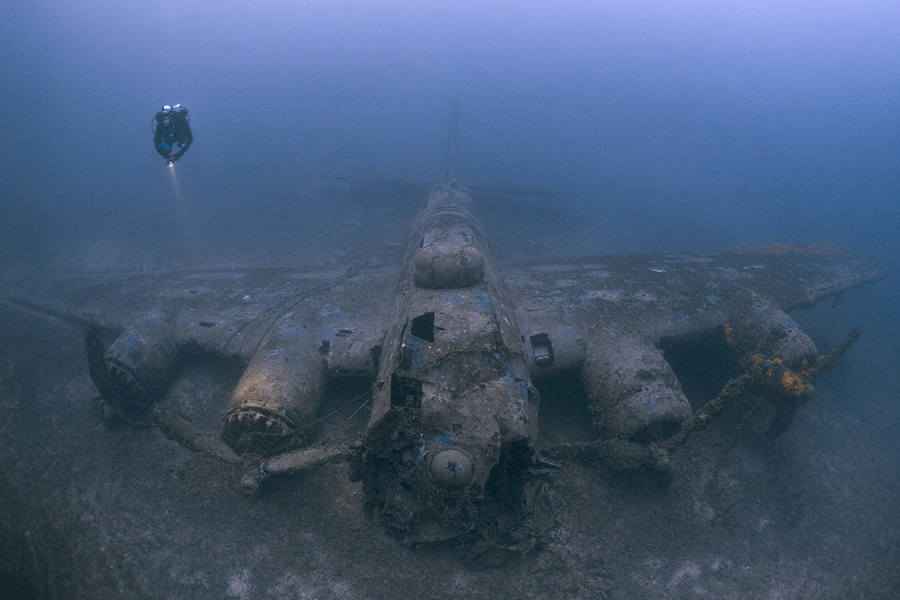 Last Flight. This USAAF B-17G Flying Fortress crash landed on approach to the island of Vis, Croatia after being hit by anti-aircraft fire during a bombing raid over Europe in 1944, which killed the co-pilot Ernest Vienneau and led to engine failure. The surviving crew escaped in dinghies. This spectacular wreck of a famous World War 2 bomber is in remarkable condition and lies at 72 metres. I only had one dive on the wreck and the depth gave me very limited time in which to work so good communication between myself and my buddy, Andi Marovic was essential: I thoroughly briefed him on what I was trying to achieve before the dive so he could also visualise the image I was aiming for. I wanted to capture an image that showed the true scale of the aircraft so I shot with natural light and color balanced the image during post processing. 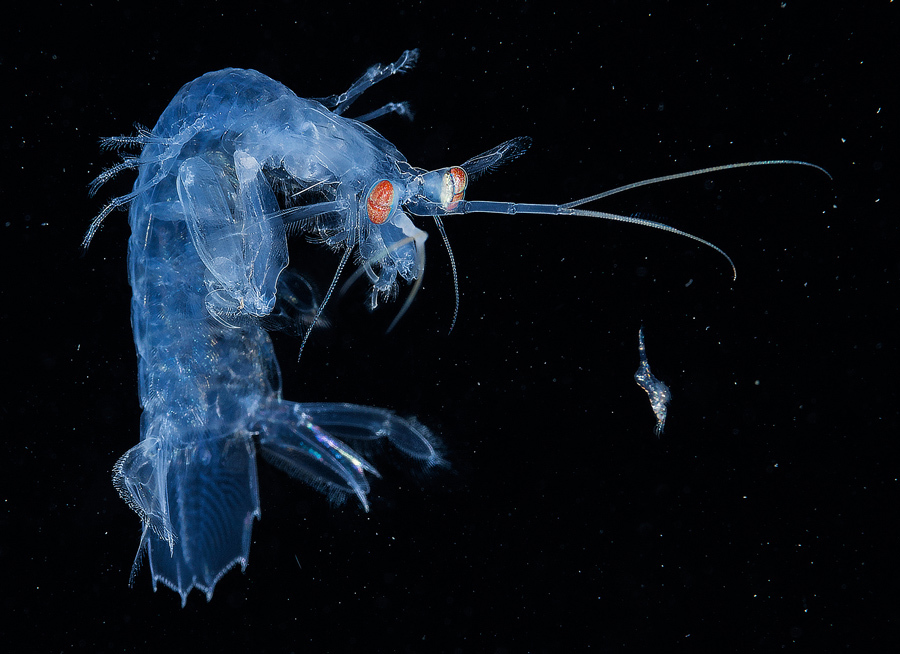 Prey? This photo was shot during a blackwater dive in Anilao, Philippines. Even though the larvae mantis shrimp (left) is very small, it still a predator which uses its raptorial appendages to hunt. Has it spotted the prey and is ready to pounce? 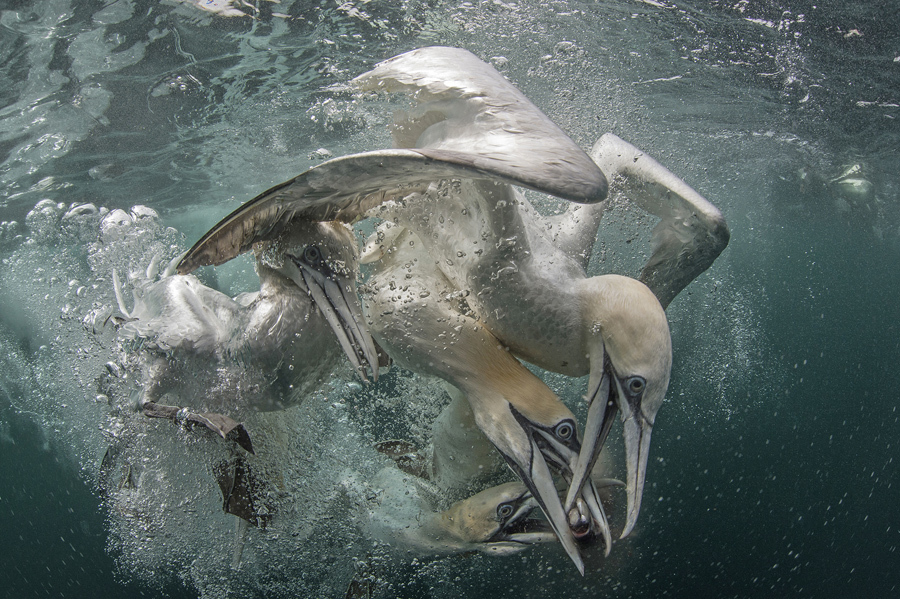 Competition. I was out off the coast making images for SCOTLAND: The Big Picture - a project about rewilding that produces images to amplify the case for a wilder Scotland. Hundreds of gannets were circling the boat looking for the fish that were being thrown over the side. Suddenly a single bird dives and the others seeing it as an indicator and 20, 30, 40 birds are diving at once. Because of this behavior competition between gannets is always going occur creating several gannets diving for the same fish. I could hear the birds as they hit the water right above my head just before they appeared in front of the camera. A great experience. 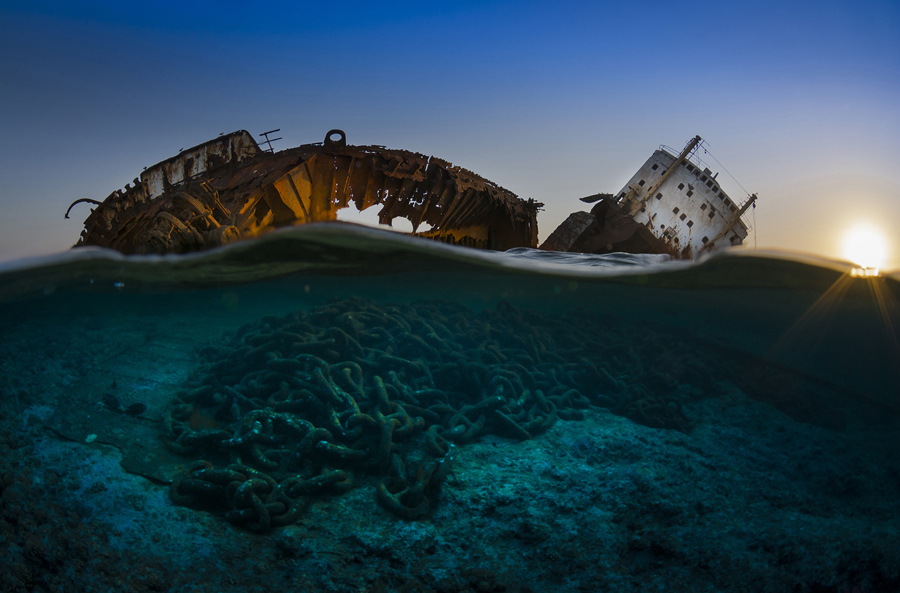 The wreck of the Louilla at sunset. This is the wreck of the Louilla resting on top of Gordon reef in the Straits of Tiran on the edge of the Sinai. Beneath her lies a pile of her anchor chains, giving the form of a whale. Wrecks become part of the eco-system in no time. Soft corals develop very soon and they can become shelter for schools of juvenile fish. But also, they can have a devastating effect on their surroundings. This wreck sits on top of Gordon reef, battered by the waves and is slowly deteriorating. Last summer, part of the superstructure collapsed, and the wreck lost it's epic, cinematic look. In a few decades, the reef should be free again from the remains of this once huge freighter. 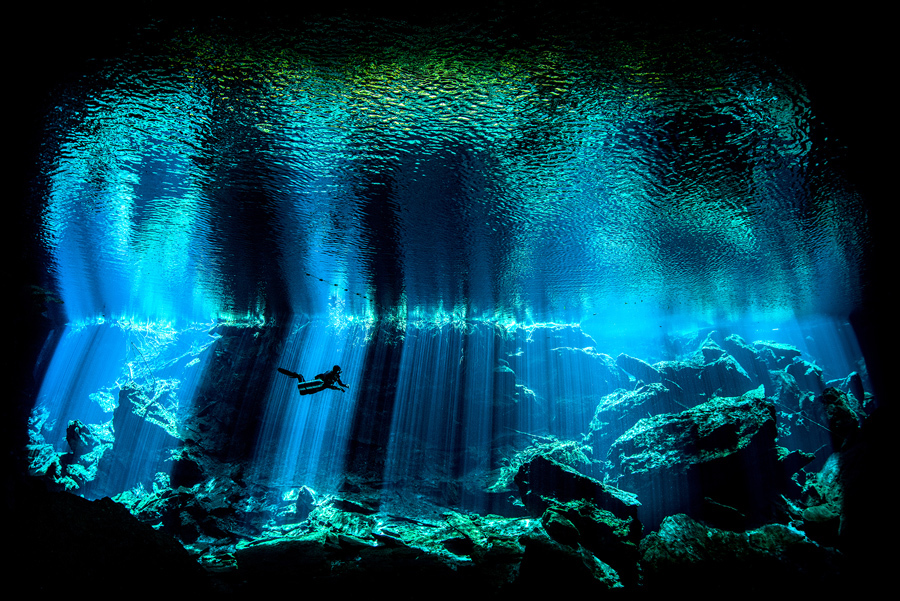 Out of the Blue. Kukulkan Cenote on Mexico’s Yucatan Peninsula forms part of the Chac Mool system and is noted for the spectacular light effects as the sun penetrates the darkness. I left my strobes behind for the natural light shot I wanted and positioned myself in the shadows of the cavern. Moving my eye around the viewfinder, I could see that the rock outline of the cavern around me made for a pleasing symmetry and I adjusted my position to balance the frame. The light show flickered on and off as the sun was periodically covered by cloud and as it reappeared, I beckoned to my buddy and dive guide, Andrea Costanza of ProDive, to edge into the illumination of some of the stronger beams, completing the composition. 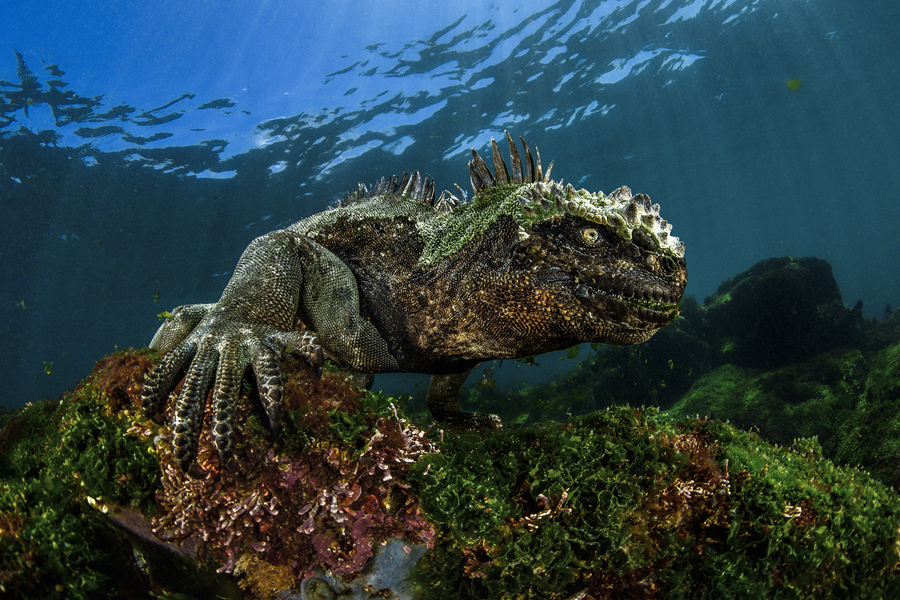 Imp of darkness. On his visit to the Galapagos islands, Charles Darwin was revolted by the animals' appearance, writing: "The black Lava rocks on the beach are frequented by large, disgusting clumsy Lizards. They are as black as the porous rocks over which they crawl & seek their prey from the Sea. I call them 'imps of darkness'. They assuredly well-become the land they inhabit." The marine iguana are all but monsters. Endemic to the Galapagos, it's a rare privilege to share a moment underwater with this animal now considered as an endangered species. 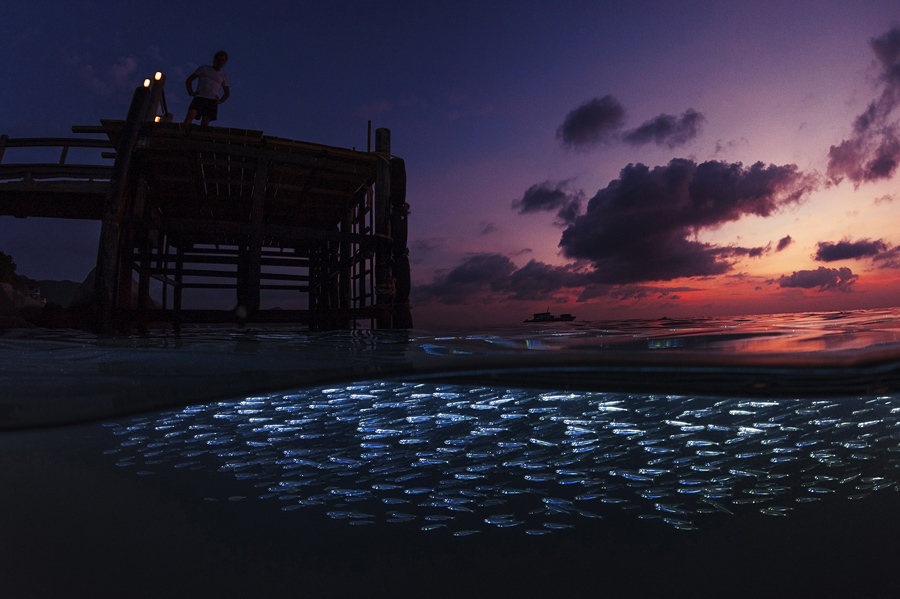 Silversides at Twilight. After finding this location, the jetty and silversides were on my mind for a long time. And when the monsoon rains took a short break, I jumped in the water to execute this idea. The main obstacle was that the school was too evasive for a fisheye lens and the sun was falling too fast to execute the idea. I began to compromise my settings and already considered the endeavor a loss but then some trevally arrived to feed. This was perfect, the silversides forgot about me. Simultaneously a passerby arrived. He positioned himself perfectly on the jetty above. Seeing the opportunity, I told him not to move and pressed the shutter as quickly as possible. The next moment this image appeared on my screen. Moments later, with a smile on my face, I watched the last rays of light fade on the horizon. Photographed on the northern Coastline of Koh Tao, Thailand. 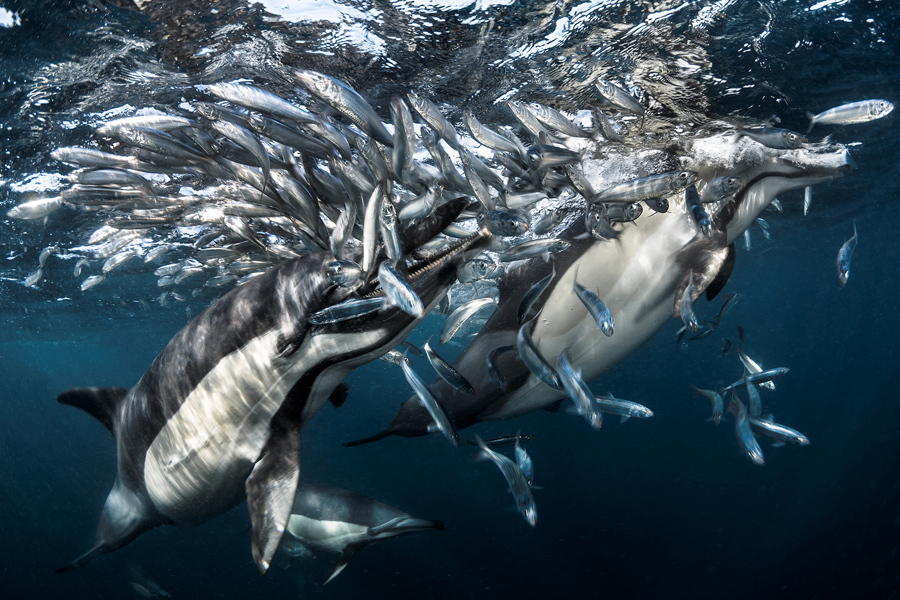 Dolphins hunting. Since last year, sardines have become victims of overfishing and climate change. They are the main food source of marine life, many species such as penguins, sea lions, sharks, dolphins and more... are dependent on them for their survival. During their migration along the wild coast, all the predators work together to hunt sardines but the action is more and more unpredictable. To capture this moment, I had spent several days on the ocean to have one chance to witness this behavior. Photographed near Port Saint Johns, South Africa, on June 27, 2016. 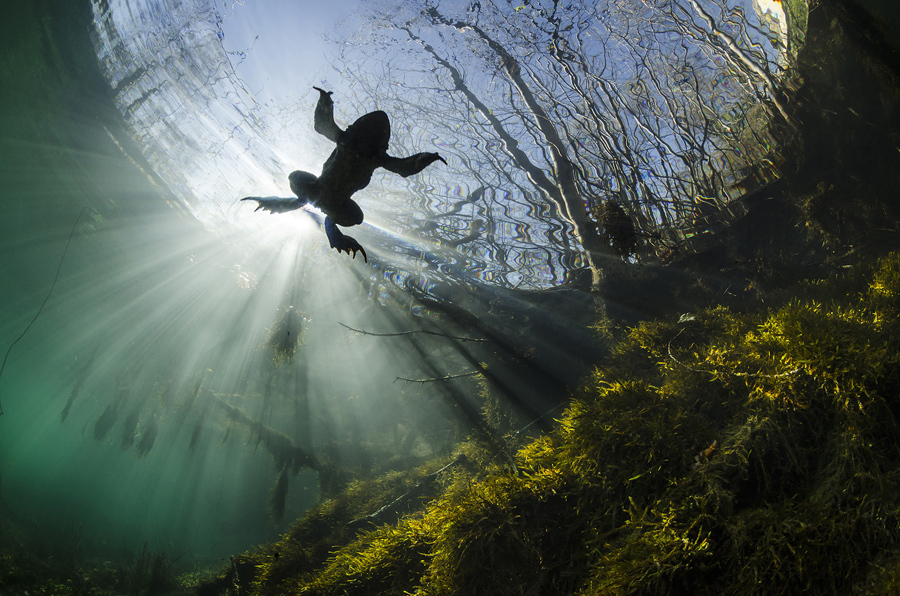 Prince of the waters. The common toads start going back to the river in February in order to reproduce. The frozen waters of this small river are by then clear enough, and ideal for underwater photography. The challenge was to progress under the subject and to get a shot once the subject was aligned with the sun all while ensuring a framing including the trees on the shore. Photographed in France's Lamalou River on April 19, 2014. 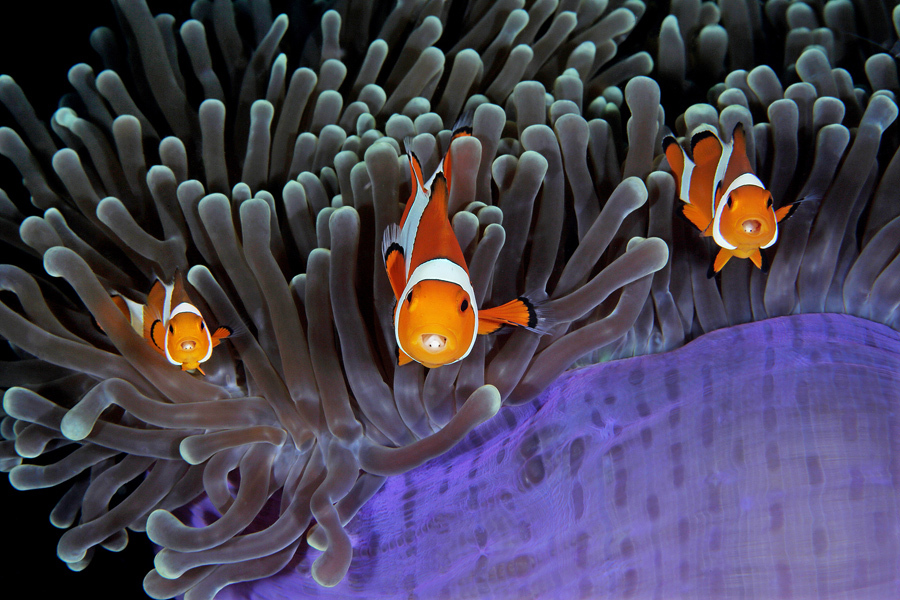 Your home and my home. Clown anemonefish and anemones enjoy a symbiotic relationship. The parasitic isopods like to hang out in the mouths of anemonefish. Perhaps because of the isopods, Clown anemonefish often open their mouths. These three particular fish were very curious. As I approached, they danced about the camera lens. It took me six dives, patience and luck to capture the exact moment when all three fish opened their mouths to reveal their guests. Finally, on the last day, on the last dive, I succeeded. Photographed near Lembeh, Indonesia, on December 2, 2016. 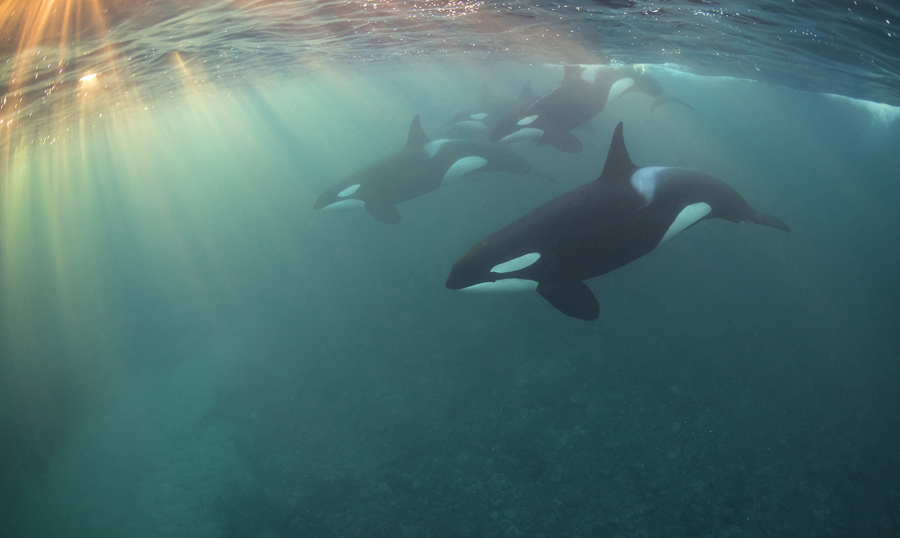 Orca Pod. Orcas are easily the most beautiful, intelligent and confident animals I’ve ever had the honour of spending time with. This photo was taken during an amazing week free diving with wild Orca in Norway. The days are quite short in winter and the water was around 5 degrees but we wore a thick wetsuit and of course with Orca around, the cold was quickly forgotten. The light had a really nice colour from the setting sun as this graceful pod of Orca swam by nice and close. It was a moment which will be hard to top and I'm glad to have this image to share it. 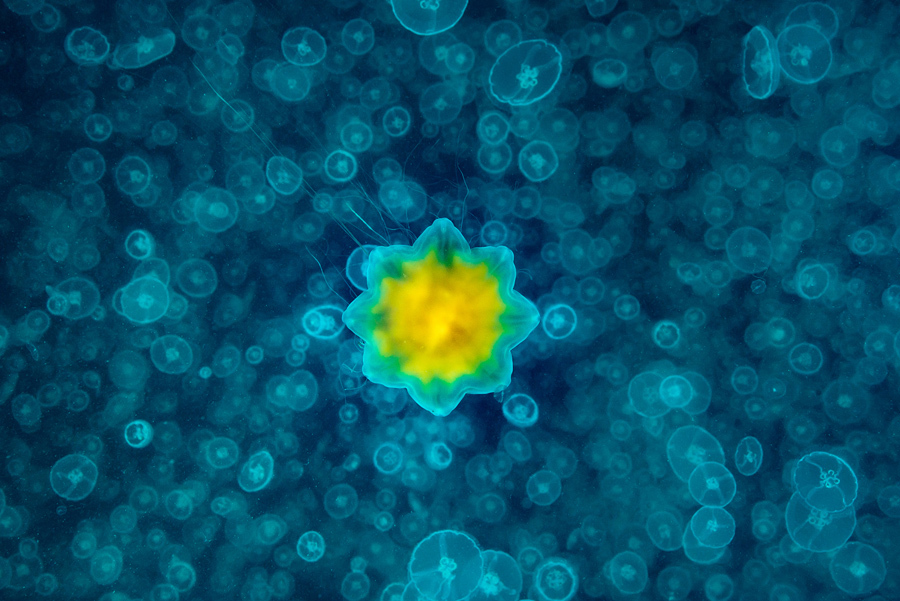 One in a Million. Last summer I headed to Alaska in search of salmon sharks. We cruised in the boat looking for their dorsal fins for hours and that is when we came across an enormous moon jellyfish bloom that stretched for several hundred metres. The dense bloom of jellyfish ranged in depth from 2 metres to over 20 metres and we spent a lot of time in the water with them. It was surreal and more dense than anything I had ever experienced including Jellyfish Lake in Palau. I came across this Lion's Mane Jellyfish rising from the bloom towards the surface and positioned myself directly over it to capture this image. 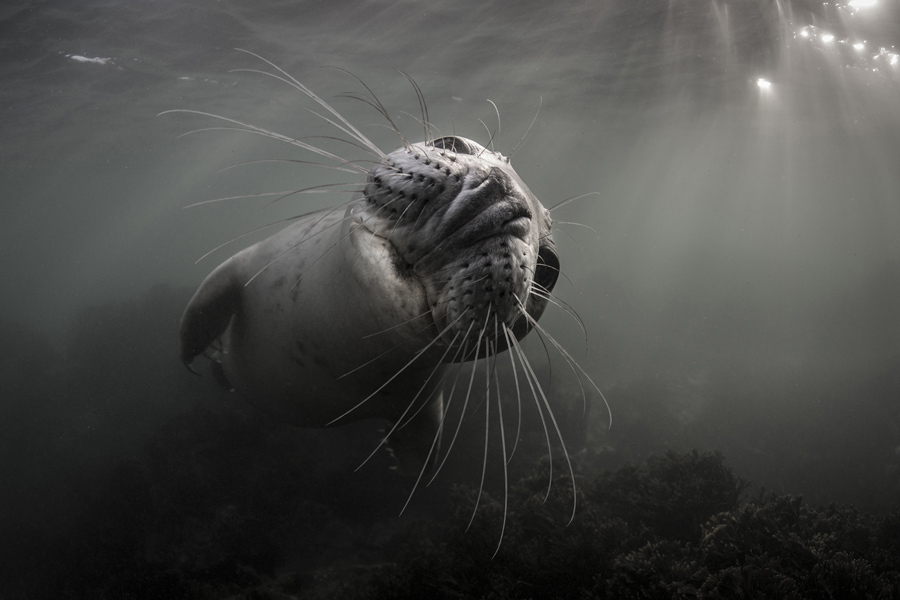 Can I help you?. Last November when we visited the largest colony of grey seals in UK, the super moon caused huge tidal changes, some nasty currents and bad visibility. But being in the water with these curious creatures is a joy even if you can only see them when you turn around at the surface and they look at you, all big eyes, before they disappear again in the cloud of murkiness. We stayed in the water as long as the tides allowed us, changed locations a few times and when we were dropped very close to some rocks without kelp beds around, the sun came out and improved the visibility greatly. As if the seals knew this would be their chance on a nice portrait, they came really close, I added some Sola light to the ambient light to be able to dial down my settings a bit and catch the low sun rays lighting the whiskers from both sides!

39 best pictures of 2016, according to National Geographic

11 striking drone photographs from around the world

Winning photos from International Garden Photographer of the Year competition