Several hundred protesters, some holding "Resist" signs, lined up across the street

President Donald Trump turned back the clock with a bold and aggressive Florida speech straight out of his 2016 campaign playbook, enthralling fans while insisting all is well in the White House despite weeks of turbulence.

He also took aim at his favorite foil, the "dishonest" news media that he said has become "part of the corrupt system." At the end of a stormy first month in office, the populist billionaire took the power of the presidency on the road, revisiting the style and substance of the campaign trail.

After stepping down from Air Force One to a deafening cheer, he entered a packed hanger and was drawn into the collective bosom of several thousand of his dearest followers - mostly white, mostly male middle-class Americans who feel they have been left behind by the country's shifting economy.

"I'm here because I want to be among my friends and among the people," he admitted. 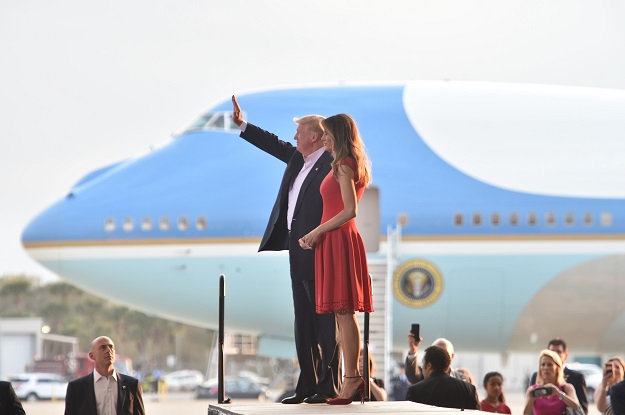 US President Donald Trump and First Lady Melania Trump arrive for a rally on February 18, 2017 in Melbourne, Florida. PHOTO: AFP


Trump employed a loud and muscular delivery - one which won over millions of voters on the campaign trail last year - to assure Americans he is fulfilling his promises to shrink government, rebuild the military, restrict immigration, and repeal and replace health care reforms enacted by predecessor Barack Obama. "This will be change for the ages," the new president said at the event in Melbourne, a sun-bleached city on Florida's Space Coast.

But Trump was completing his first month in office with his administration under a cloud back in Washington, where lawmakers pledge to further investigate his possible pre-election ties to Russia, his national security advisor was forced to resign in disgrace, and a cabinet nominee withdrew amid controversy.

"The White House is running so smoothly, so smoothly," Trump stressed, before going on an extended rant about the US media. "I also want to speak to you without the filter of the fake news."

"They've become a big part of the problem. They are part of the corrupt system," he said, continuing the open warfare with the media that has marked his young presidency.

Aside from the fact that the billionaire businessman is now leader of the free world, the event was eerily similar in style to Trump's campaign -- from the layout, to the recorded music, to the president's largely impromptu delivery.

About the only thing missing was attacks on his 2016 Democratic rival Hillary Clinton. Trump reiterated his pledge to crack down on terrorism, saying he has "ordered decisive action to keep radical terrorists the hell out of our country." And he said his administration would submit "in a couple of weeks" a plan to repeal and replace "the disaster known as Obamacare." Republican leaders in Congress have said they will unveil their health care plans in the coming weeks as well.

Meanwhile, First Lady Melania Trump, usually a demure and soft-spoken presence at her husband's side, broke with form by reciting the Lord's Prayer to begin the event, before issuing a scathing rebuke of his enemies and her critics.

"Let us pray," she began, before reciting the well-known Christian prayer. She then launched into an uncharacteristically strident defense of her husband - and her own brief tenure as first lady.

"I will always stay true to myself and be truthful to you, no matter what the opposition is saying about me," the first lady said, wearing a red frock with a fitted waist and flared skirt, her mane of blonde hair blowing slightly in the breeze. 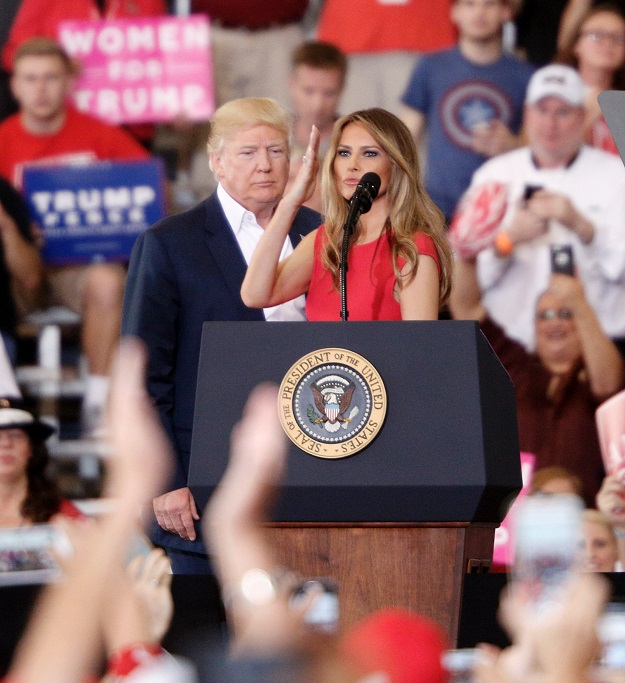 First Lady Melania Trump salutes the crowd after introducing her husband, US President Donald Trump at the start of a rally at the Orlando Melbourne International Airport on February 18, 2017 in Melbourne, Florida. PHOTO: AFP


At one point, the president broke security protocol by inviting a supporter to hop a barrier and join him onstage. "Mr. President, thank you, sir," said Gene Huber, a car salesperson from West Palm Beach who said he was first in line for the event, arriving at 4:00 am to see his political hero. "This is a world leader now who's taking control," Huber told AFP earlier. "No jitters at all."

But the commander-in-chief was clearly seeking to reconnect with his tribe in a reassuring environment. With the past week marked by his national security adviser's resignation, a withdrawal by one of his cabinet nominees, and a startling news conference loaded with vituperation, his team appears to have seen a return to his political bread and butter to be in order.

Tensions have soared in recent days as lawmakers pressed for more information about the Trump campaign's connections with Russia.

Robert Sponsler, 64, a retired railroad worker from Jacksonville, turned his nose up at the stew in Washington. "We don't care," he said of the various conflicts Trump is navigating. "He don't owe nobody nothing. I'm with him 100 per cent."

Several hundred protesters, some holding "Resist" signs, lined up across the street. "Watch out, snowflakes!" yelled one man who wore a black vest with a "DJT 45" patch as he mocked the demonstrators. "It's warm out here, you might melt." 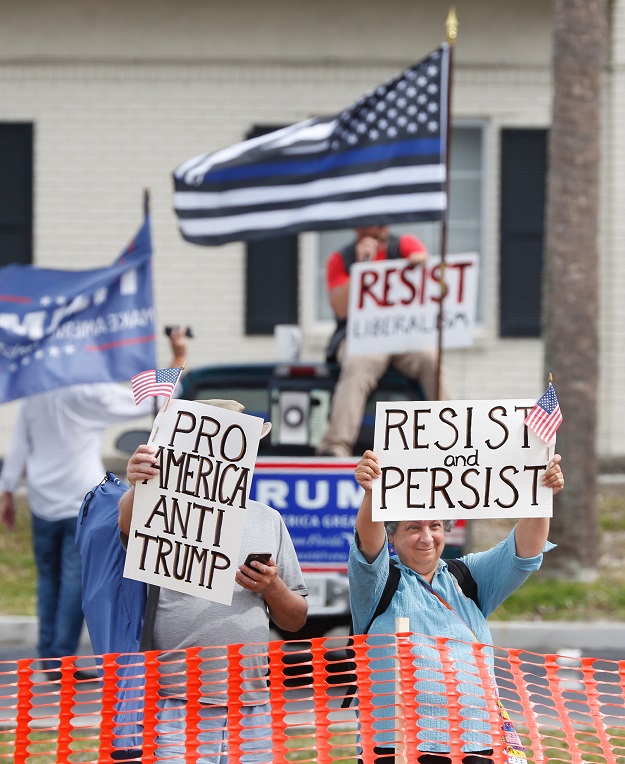 Anti-government protesters demonstrate across the street from a rally in support of US President Donald Trump at the Orlando Melbourne International Airport in Florida on February 18, 2017.PHOTO: AFP

Mexicans form 'human wall' along US border to protest Trump