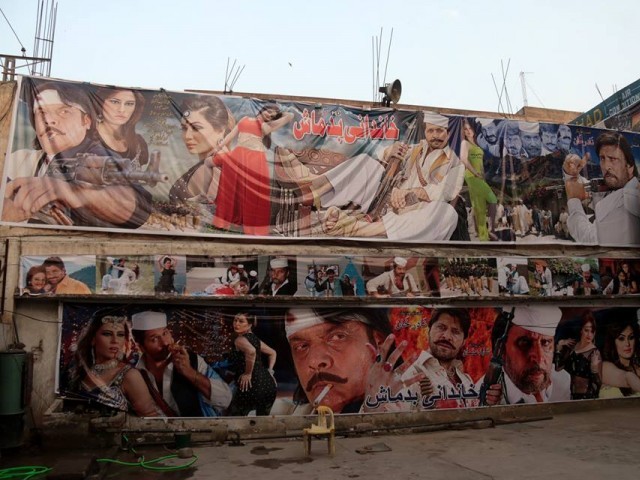 Oversized film banners outside the buildings are not enough to attract audiences anymore. PHOTOS: PUBLICITY

PESHAWAR: Fading audience interest towards Pashto films has forced producers to stop churning out movies that may prove disastrous at the box office in Khyber-Pakhtunkhwa.

Bad quality films seem to be the last nail in the coffin in whatever remains of the Pashto film circuit in the province. The PAF Cinema has been closed for the past one year, while four cinemas in Nowshera and one in Mardan have been shut down indefinitely. There were also two theatre houses in Swat that are no longer functional.

“The cost of doing business is extremely high now,” Rehan Khan, contractor of Capital Cinema told The Express Tribune. “Capital Cinema had been screening two shows a day of a Pashto movie, charging Rs100 per ticket. But there were not more than 10 people in the cinema hall, and we are struggling to meet the expenses. We are now trying to figure out how to pay monthly bills and salaries.”

Situated in a historical building in Saddar, the cinema house is currently screening a decade-old Pashto film. Rehan revealed that while it used to make good money during the winter, no new Pashto film has released since Eidul Azha last year, forcing regular cinema-goers to stay home. He mentioned that when a Pashto film is finally released in the city, hundreds gather outside the cinema houses, shouting and cheering their favourite hero.

Besides low quality Pashto movies, the rundown conditions of cinemas are also a pivotal reason behind the downfall of the industry. There are few lights, vintage electricity fans, and broken wooden or steel seats. Presently, all cinema houses are operating using traditional film projectors. The oversized film banners outside the buildings are not enough to attract audiences anymore. And, those who do not have large movie posters outside are unable to afford the cost of business.

“Pashto film-makers have made movies even in the most difficult times. They did not stop working even when there was a volatile situation in the province and a number of cinemas were being attacked,” added Shahid. He said that the dilapidated cinemas are still being subjected to taxes.

Peshawar has badly suffered from terrorism but local film producers and cinema owners remained resilient and kept cinema houses functional even in the most precarious times. Shahid, who also produces his own films, lamented the fact that there are very few Pashto directors left. However, he urges the government to support those who are still motivated to belt out good quality work.

“Nothing will be left within a year, neither a cinema nor a film,” he said. “It is the responsibility of the government to support the cinema and film industry.”

How to deep-clean your keyboard