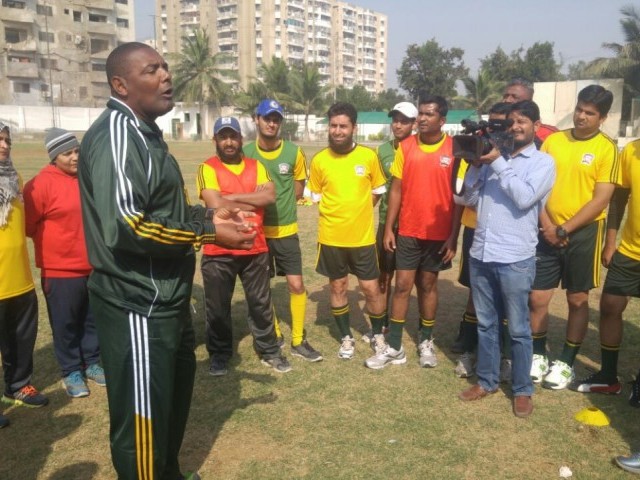 Untapped potential: During his stay he trained 200 players and 50 football coaches and physical education teachers, but the talent in Lyari impressed him the most. Photo Courtesy: FUSA

KARACHI: “The world is fascinated by Brazil’s obsession with football, and I believe the youth of Pakistan share the same obsession as us Brazilians,” said coach Romildo Perera Sanches while wrapping up his 12-day tour in Karachi.

Sanches, a former player turned coach, was invited by the Foundation United Soccer Academy (FUSA) to divulge his knowledge of football to local players and coaches.

During his stay he trained 200 players and 50 football coaches and physical education teachers, but the talent in Lyari, perhaps unsurprisingly, impressed him the most.

“The boys in Lyari were very determined and they have the spirit and the talent required,” Sanches told The Express Tribune. “It is the same in Brazil, children from such impoverished backgrounds need football since not only do they have the talent for it but it is also their way out of poverty.”

Sanches believes it is the responsibility of all involved — the government, the parents, the coaches and even the business community — to come together to nurture such talent and take it to an international level.

“Quite frankly, I feel like I am home here,” said Sanches. “I have very good people around me; I feel the Lyari boys really need to surround themselves with good people too, who can groom them. I see the will and the motivation in these players.”

Sanches represented famous Brazilian club Cruzeiro EC in the 80s, before moving to the US in 1986 and continued to play till 1993.

The 65-year-old helped establish Valrico Soccer Club and then began the Players Club of Tampa Bay in 1999 as a coach. Several of the players he has coached now feature in US’s Major Soccer League.

Sanches feels Pakistan is going in the right direction by letting foreign coaches come in, while his advice to the players is simple.

“My experience has been a very positive one,” said Sanches. “These are kids who want to play football. The best thing to do in Pakistan is to get foreign coaches have a look at these talented kids. I just want to tell the players to keep up playing the game and keep at it.”

Sanches said that the most heartening aspect of his visit was the hospitality in Pakistan. “When I was invited here I thought I will come and train the kids and I’ll return — it will go unnoticed,” he said. “But I’m very grateful for the way everyone came out and supported me.”

FUSA manager Fahad Ali Agha said a lot of positives will come from Sanches’s visit. “The children were excited and had their morale boosted by just knowing that a Brazilian coach is among them,” said Agha. “Their excitement was inexplicable, they responded well to his training and we would definitely want Sanches to return to Pakistan. He coached our club players, along with players in Lyari and women’s clubs. We are seeing great results from this endeavour.”