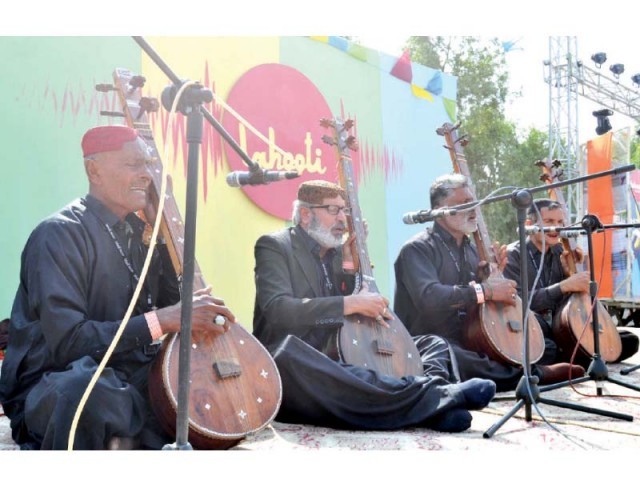 HYDERABAD: Bringing a feast of folk and mainstream music, the two-day Lahooti Melo, the second since 2016, kick started in Hyderabad Club on Saturday.

Thousands of youth turned up to enjoy the festivities, organised by musician Saif Samejo’s band, The Sketches, in collaboration with the Sindh culture department.

Regional music is the originality Pakistan offers to the world: Irfan Ali Taj

“We are watching a cultural renaissance in Sindh,” said Sindh Culture Minister Syed Sardar Ali Shah during his speech at the inaugural session. US Consul-General Grace Shelton described art, folk music and culture as the beauty of Pakistan’s diversity.

Lok Virsa executive director Fauzia Saeed expressed hope that the festival will continue to draw more and more people each year. “The seeds of these events were sown in my home’s balcony,” said Samejo recalling the origin of his band from his residence in Jamshoro to holding the first Lahooti Melo in 2016.

Of music and trade routes

It’s true when they say ‘everything’s China’ as the emerging economy made its way to Lahooti Melo music festival in Hyderabad on Saturday.

In a panel discussion on ‘Indus Valley Culture: Prospects and Challenges’, the China-Pakistan Economic Corridor made its appearance when speakers said the trade route offered both opportunities and challenges to the culture of Sindh.

“We have to understand that culture is not a frozen thing. It can never be stagnant. It evolves,” affirmed Bhai Khan Shar, director of the Centre of Excellence in Art and Design at Mehran University of Engineering and Technology.

The opinion came in response to moderator Waheeda Mahesar’s query that underlined the cultural differences between Chinese and Sindhi people, conceiving the scenario of Chinese influx along with their investments. The prevalence of Chinese or US cultures in other countries has been buttressed by their economic might as the world sees Chinatowns springing up in every other country. “But this [the intermingling] also offers us the opportunity of projecting and promoting our own [Sindhi] culture,” he said.

Mahesar also wondered what will be the consequences of welcoming yet another language in the form of Chinese in addition to Urdu, English and other local languages on Sindhi. Sindh University Sindhology department’s director Ishaq Samejo opined that, despite the influences of many other languages, Sindhi has survived in all respects.

Allama Iqbal Open University Prof Inamullah Shaikh likened history with the back view mirror in a car. “One can’t drive a car well without constantly watching from that mirror what’s behind.” He believed that the youth are mistaken if they think that the past is irrelevant. “Our youth should never forget that they are custodians of 5,000-year-old Moen Jo Daro, 15,000-year-old Mehargardh and other Indus civilisations,” he asserted. “This is a treasure that you can be proud of. This is a weapon you can display to the world.”

Zoe Viccaji takes us to the beautiful north with Hojao Azaad

Prof Shaikh underscored the need to market Sindh’s culture like India where the heritage site of Taj Mahal alone attracts hundreds of thousands of visitors and earns billions of rupees from tourism. If the people of Sindh start visiting the lakes, deserts, heritage and archaeological sites in the province, they can compel the provincial government to provide facilities at these places, he said.

Journalist Manzoor Meerani pointed out that the languages and cultures of Kolhi, Bheel and Oadh communities have not been preserved. The moderator questioned why the people of Sindh cannot spend Rs1 million to make a detailed documentary on their civilisation if the Indians can spend a billion rupees making one on Moen Jo Daro? She also asked the panellists to explain why Punjabi and Pashto film industries continue to produce at least three movies every month while that of the Sindhi cites the repression of 1980s to justify the long halt? But convincing answers eluded the panellists.